This film examines the tale of Indian Head Rock, a 6-ton boulder that resided in the Ohio River near South Shore, Kentucky, hidden below the water's surface for 87 years. In 2007 a team of Portsmouth, Ohio historians located the rock and removed it from the river with hopes that its rediscovery would celebrate the history of the region. To their surprise many Kentuckians felt as though the rock belonged to them, thus beginning a nationally played-out battle between the two states.
Length 55:08 Premiere: 7.3.17

In “Between the Rock and the Commonwealth” filmmaker Steven Middleton takes a look at the dispute between Kentucky and Ohio over Indian Head Rock.

The rock, a 6-ton sandstone boulder from the Ohio River between Portsmouth, Ohio, and South Shore, Ky., was known in the 1800s and early 1900s for its carvings, including a smiling face. People took photos of themselves standing on the rock.

However, the rock was hidden from view after work on locks and dams caused the river level to rise. The last known photo of the rock before then, with the smiling face carving exposed, was in 1920, Middleton said.

The rock came to light again after 87 years, when in 2007 Steve Shaffer and a team of Portsmouth historians located the rock and removed it from the river, taking it to Ohio. They hoped that its rediscovery would celebrate the history of the region.

The dispute went on for 2 ½ years. The rock could not be proven to be the actual “Indian Head Rock” that was designated an archaeological site by the University of Kentucky Office of State Archaeology. An agreement was reached to send the rock back to Kentucky, and since 2010 the rock has been stored under a tarp inside the county garage in Greenup.

“You wouldn’t believe how many people, we’ve had them open the garage up and let people stop and look at it,” said Robert Carpenter, Greenup County judge-executive. He believes it has historical value. “It was a marking place for the boats – you don’t go over that far. That was kind of a marker, that was how deep it was,” Carpenter said. “You don’t want to get over any closer.” Carpenter said people used to swim over to it and place their initials the rock. “It should be displayed for our children to see.”

The Beginnings
One story goes that in 1830 a young John Book of Portsmouth waded out to the rock at low water and began carving the smiling face. Another legend says river pirates carved the face to mark a buried treasure spot. Some people assumed the smiling face was among the Native American carvings that can be found in the region.
The earliest documented evidence of the rock, Middleton said, was in the 1848 book “Ancient Monuments of the Mississippi Valley.” There the rock is described as a “colossal human head cut in outline upon the vertical face of a large rock extending into the river.” It said the rock is not exposed above surface except every four or five years. Historians, however, believe the description as “colossal” showed that the author never actually visited the rock.

The rock is featured in the 1850 “Panorama of the Monumental Grandeur of the Mississippi Valley” by artist John J. Egan. He had created the work based on drawings of Dr. Montroville Wilson Dickeson, an archaeologist who excavated numerous Native American sites. However, Egan depicted the rock as a giant head sticking up out of the Ohio River. As the panorama was viewed in shows across the country, the legend of Indian Head Rock grew.

An 1851 article in the Portsmouth newspaper described it as “the outline of a human head engraved upon a large rock now but a few feet from shore.” The article said some believed Native Americans did the carving, but others believed it was cut by pioneers for a low water mark.

The Rock Rediscovered
Steve Shaffer recalled how a book by Henry Bannon from the 1920s piqued his interest in the Indian Head Rock. “When we started looking for this rock we were looking in 20 feet of water plus, thinking the river had come up that much,” he said. In retrospect, he said, his team probably swam over the rock dozens of times. “We were just looking in the wrong place for it, for almost three years,” he said.

Divers finally found the rock at 16 feet of water, and the team removed the rock and brought it to Portsmouth.

Jim Kalb, mayor of Portsmouth, recalled the day he learned about the rock. “The diving group, they came to my office and said they were there to present me something for the city. They said it was bigger than a breadbox, and smaller than a car, and they had my interest up,” he said.

Kalb recalled that the South Shore mayor had no interest in the rock, but he said as time went by, more people became interested in the rock. “I didn’t really see it as an ownership type thing. You know, nobody would own it. It’s a piece of history. And I tried to fly with that, and I guess some people just didn’t agree with that.”

Todd Book, an Ohio state representative at the time, said he was persuaded to become involved after Shaffer told him the story of John Book and the smiling face carving. “Once I bit, I bit hard,” he said with a chuckle. He became involved in efforts to publicize and celebrate the history of Portsmouth and the rock.

The city of Portsmouth created the Indian’s Head Rock Festival, complete with rock climbing. Historian Randy Nickles made a video, “We Will Rock You.” Portsmouth Mayor Kalb had Civil War re-enactors “guard” the rock, just for fun. Book proposed resolving the ownership issue with a “rock, paper, scissors” battle.

Jack Conway, then Kentucky’s attorney general, remembered a call from his counterpart in Ohio. “He starts talking about this rock. … He was kind of a fast talker to begin with. He said, maybe we can keep it six months, you can keep it six months, we can exchange. I thought, what on earth … so I got into it a little. I didn’t realize what had happened,” he said.

Conway said that while some may find the dispute amusing, it was important to enforce the laws regarding antiquities and theft. “You can’t be cavalier about enforcing the law. That for me was always kind of something I had to remind myself of.”

In June 2008, Shaffer was indicted by a Greenup County grand jury, charged with violating the Kentucky Antiquities Act.

Shaffer recalled that the antiquities charge was dropped, but then he was charged with receiving stolen property. “I’m not sure where that came from. But somebody was going to pay for this thing,” he said.

Where it Stands Today
In 2010 all charges against Shaffer were dropped. The two states agreed to return the rock to Kentucky. A decision had to be made, whether to put the rock back in the river or display it, Middleton said.

“All we wanted in the first place was a guarantee that it wouldn’t go back into the river,” Shaffer said.
David Pollack, director the Kentucky Archaeological Survey, said the rock is removed from its context now. “It’s just as hidden today as it was in the river. So it a lot of ways it would have been better off just left in the river,” he said.

Others disagree. Book said the rock that tells a story, and noted that Mark Twain said, “It’s is better to take what does not belong to you than to let it lie around neglected.” Book said Shaffer should be celebrated for bringing something from history to light.

For now, the rock remains in the county garage. Middleton said that the Ashland Daily Independent reported in March 2017 that the Greenup County Fiscal Court is seeking a grant to build a permanent structure for the rock at South Shore.

About Between the Rock and the Commonwealth

Related to Between the Rock and the Commonwealth 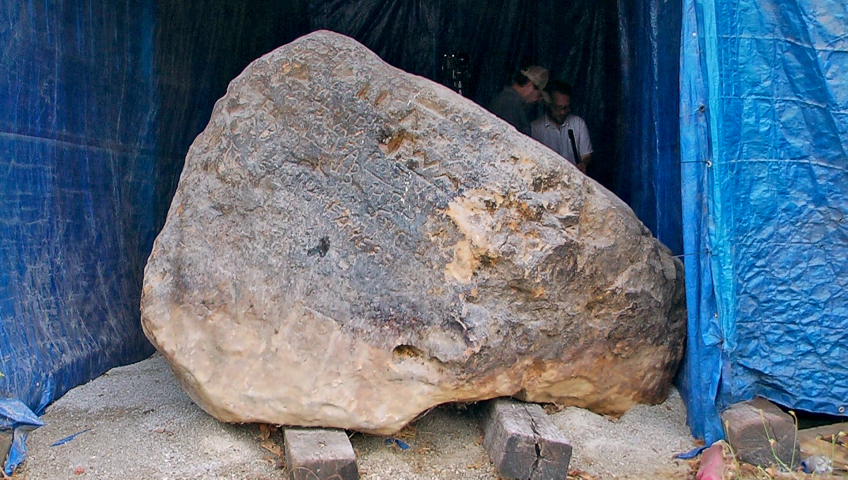