The program examines the incidence of late colon cancer diagnosis, particularly in the areas of Eastern Kentucky and Western Louisville, the cultural reasons why early screenings are not prevalent, and how the situation can be remedied.
Length 27:29 Premiere: 7.7.15

Kentucky has made great strides over the past dozen years in lowering colon cancer incidence and mortality rates. This is due in large part to a comprehensive effort by the medical community to spread awareness about the need for people to get timely colon cancer screenings.

The Colon Cancer Prevention Project, started in 2004, has led the charge to boost screening rates, in particular targeting populations in eastern Kentucky and within the African American community that are at higher risk for colon cancer.

In Catching a Killer: Colon Cancer in the Bluegrass, we follow Louisville activist Christopher 2X as he prepares for a colonoscopy, and also meet Larry and Verla Jones of Harlan County, who have relied on their faith and medical treatment to fight Larry’s Stage 4 colon cancer.

We also hear stories from other Kentuckians who have faced the disease, which is the second deadliest cancer in the U.S. among cancers that affect both men and women but can be treated with successful outcomes if caught in pre-cancer or early stages.

In many communities across Kentucky, and for many generations, colon cancer screening was not something to consider, or even discuss. Shannon Morton, patient navigator at the Appalachian Regional Healthcare’s Cancer Center, says that the reasons for poor screening rates in eastern Kentucky are complex.

“You hear a lot of patients say it was fear, they just didn’t want to know, they had symptoms, [and] sometimes they’ll say that,” Morton says. “It used to be that insurance was a reason, but now most patients have insurance, you know. So I think it’s a little bit of everything. You hear a lot of people say, ‘Well, my grandfather or great-great granddaddy had it, I was just destined to have it, it’s in the family, it’s hereditary, you know.’”

In Louisville’s largely African American West End, Christopher 2X has heard many of the same reasons for putting off screenings over the years. He did so himself before deciding to use his platform as a well-known anti-violence community activist to educate and engage his community about the need for colon cancer screening.

“Cancer is just not a conversation we have,” he says. “Yeah, we talk about, you know, at the time, when something goes wrong, somebody loses their life to a health issue like cancer, there will be a brief conversation. But I can’t recall at any time in my life where I thought about it, before this challenge to go on and to really confront the whole situation about colon cancer screening.”

Preparing for his colonoscopy, Christopher 2X also talks with several community members about the need to confront what he calls “the thief that became a killer.” He says that especially among black males, there’s a reluctance to go to the doctor for any routine checkup or preventive treatment. This delay can prove very harmful with regards to colon cancer.

No Early Warnings Require a Proactive Approach
Colon cancer has no early symptoms. Pre-cancerous polyps can develop inside the colon and exist for months or years before becoming cancerous, and even after that happens, it may take additional months or years before symptoms develop. These may include: a change in bowel habits such as diarrhea and/or constipation; cramping in the lower stomach; blood in the stool; weight loss; fatigue; and anemia.

Two years ago, lifelong Harlan County native Larry Jones began to experience symptoms of fatigue and went to the doctor. A tumor in his colon was found that had extended into his abdominal wall, and parts of both were removed.

Larry, a husband, father, and 27-year employee of Dairy Queen Corporation, thought that he had dodged a bullet. But additional tests revealed that the cancer had spread to half of his lymph nodes and to his liver. He was diagnosed with Stage 4 colon cancer.

“The only word I could think of was, I was terrified,” says his wife Verla. “Scared. I wanted to be in denial. Cancer is the most awful word in the human language.”

Spots were found on Larry’s lungs in November 2014, and he underwent several rounds of chemotherapy. “The feelings you have are something you’ve never had from any flu or cold you’ve ever dealt with,” he says. He lost feeling in his extremities and much of his sense of taste, and endured nosebleeds and blurred vision, among other complications. Despite this, Larry never missed a scheduled work day.

The Joneses also faced financial hardship as medical bills mounted, but were helped by friends. Both Larry and Verla credit their faith in God and unyielding support from their tight-knit community for helping Larry get through his treatments. Encouraging progress was made in 2015 as Larry’s lungs scoped clear of any spots.

“God has not given us the spirit of fear, but the power of love and of a sound mind,” Larry says. “And with the right attitude, I’m going to beat this thing. With the proper care, listening to what the doctors tell us, we can win.”

Screening is Relatively Easy – and Very Effective
“Colon cancer is the easiest preventable cancer out there,” says Sherry Payne of the American Cancer Society. “But you have to get tested.”

Patty Francis, Program Manager for Education and Health Systems at the Colon Cancer Prevention Project, talks about a newer screening test called the FIT (fecal immunochemical) test. The patient can self-administer this test at his or home if ordered by the doctor. The FIT test measures the level of blood in the stool, which can be visually undetectable. If blood in the stool is present, more advanced tests are required.

Getting a colonoscopy is more invasive and requires an inpatient visit to the gastroenterologist as well as some necessary prep work. However, it gives the doctor a detailed picture of the entire colon and will reveal the presence of any pre-cancerous polyps, which can then be removed.

“I would tell anyone to get over any hesitation, as it relates to the prep, because you can get through that,” Christopher 2X says after chugging his bowel prep liquid and heading to the hospital. “But the bottom line is that I feel kind of cleansed.”

Christopher 2X is joined by his nephew for support at the hospital, and his colonoscopy results reveal no presence of pre-cancerous polyps. His nephew says that he hopes Christopher 2X’s willingness to have a colonoscopy and to be filmed will encourage other members of the African American community to get screened.

Back in Harlan County, Verla Jones encourages everyone to get screened at the recommended time for colon cancer. She’s heard often from people that their health is “in God’s hands,” but Verla believes that modern medicine and technology are also God-given and have been essential in helping her husband fight his disease. “And cancer doesn’t see age, religion, race, or nationality. It’s very, very important to get screened,” she says.

About Catching a Killer: Colon Cancer in the Bluegrass

Related to Catching a Killer: Colon Cancer in the Bluegrass 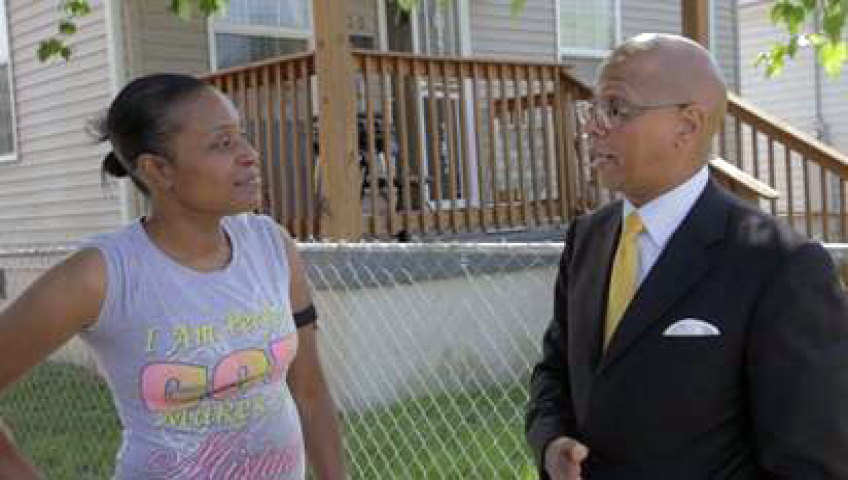