Journalists from around the state discuss news of the day with host Bill Bryant, including a visit to the state from Sen. Bernie Sanders, reports on lobbyists' spending in Frankfort, and a grant to fund a study on obesity and cancer.
S43 E23 Length 26:32 Premiere: 4.24.17

Democrats are strategizing ways to recover from their recent losses in the commonwealth, while state Republican incumbents continue to build their campaign war chests.

The journalists on KET’s Comment on Kentucky discussed those and other political stories, and explored news from the northern part of the commonwealth.

New Leadership for Democrats
Vermont Sen. Bernie Sanders made two stops in Kentucky last week. There was the much-publicized appearance Tuesday night before a packed house at Louisville’s Palace Theater. And there was a more intimate conversation earlier that afternoon at a Frankfort coffee house.

Tom Loftus of the Louisville Courier-Journal says Sanders and Democratic National Committee Chairman Tom Perez videotaped a 30-minute roundtable discussion with six Kentuckians at the café. Loftus says the conversation included many themes from Sanders’ 2016 presidential bid: too much money in politics, income inequality, health care, and the minimum wage.

Chairman Perez says Democrats must adopt a 50-state strategy in the next election cycle, according to Loftus. He reports that party leaders want to focus on wage and health care issues as way to lure back voters who benefited from the Affordable Care Act, yet cast their ballots last year for Republican Donald Trump.

The café that hosted the roundtable is co-owned by Mary Nishimuta, who is the new executive director for the Kentucky Democratic Party. Lawrence Smith of WDRB-TV says Nishimuta was a Sanders delegate at last year’s Democratic National Convention. He says she faces an interesting choice on whether to align the party with more traditional Democratic values, or lean towards the progressive and socialist values that Sanders espouses.

GOP Holding Strong
James Pilcher of the Kentucky Enquirer says Kentucky’s 4th Congressional District epitomizes the challenges Democrats face in the commonwealth. The district runs along the Ohio River from the West Virginia border to the eastern suburbs of Louisville. The rapid population growth in the northern Kentucky counties across from Cincinnati has helped push the district even farther into the GOP camp. Pilcher says Boone County alone has picked up 50 percent more Republican registrations in recent years, while Democratic registrations have shrunk.

Since the late 1960s, the GOP has controlled the 4th for all but six years, when Democrat Ken Lucas held the seat from 1999 to 2005. Pilcher says Lucas fulfilled a campaign promise to resign after completing his third term, but he did come back in 2006 for an unsuccessful bid to unseat his successor, Geoff Davis.

Republican Thomas Massie has represented the district since 2012. Pilcher says the Tea Party maverick has made waves with his outspoken comments both for and against President Donald Trump. Pilcher says establishment and pro-business Republicans in the district aren’t entirely comfortable with Massie, but he says no one has stepped forward to challenge the incumbent.

Loftus says several of Massie’s fellow Republican incumbents are already well situated to defend their seats. He reports that U.S. Sen. Mitch McConnell has $1.4 million on hand, including about $500,000 that the Senate majority leader raised in the first three months of this year. McConnell is up for reelection in 2020.

Congressman Hal Rogers (5th District) has about $1 million on hand despite raising hardly any money in the first quarter, says Loftus. Congressman Andy Barr (6th District) raised about $400,000 in the first quarter, giving him a cash balance of $780,000, according to Loftus. He says national Democratic officials want to challenge Barr in 2018 but have yet to identify a strong candidate to vie for the seat.

More Money in Politics
The Kentucky Chamber of Commerce ranked first in spending among the 720 groups that registered to lobby the state legislature this year. Loftus says the chamber spent about $127,000 during the recently completed session that saw numerous pro-business gains, including right to work legislation, repeal of prevailing wage, and approval for medical review panels.

The U.S. Justice Action Network of Washington, D.C., was in second place at $89,000 in spending. Loftus says most of that money went for polling about criminal justice issues for which the organization advocates. Loftus adds that a number of other top-spending groups from out of state focused on lobbying legislators to pass charter school legislation.

In his annual ethics disclosure, Gov. Matt Bevin showed that he holds stakes in five companies and owns a dozen parcels of property in half a dozen states. Loftus says he confirmed that the governor and his family are living in an eastern Jefferson County mansion that was previously owned by Neil Ramsey, who Bevin appointed last year to the Kentucky Retirement Systems Board of Directors.

Loftus says the $1.6 million sale price was much lower than the valuation placed on the house and 10-acre plot by the Jefferson County property valuation administrator.  He says Ramsey contends the sale price is valid because the property had been overvalued by the PVA.

According to Loftus’ reporting, the exact nature of the transaction has been somewhat clouded by the fact that a limited liability corporation owned by Ramsey sold the property to a second LLC, but official records don’t identify who actually owns that company.

Bridges and Basketball
North Kentuckians won’t see a new Ohio River bridge anytime soon, but an existing bridge is getting a fresh coat of paint.

Pilcher says the Brent Spence Bridge is being painted for the first time in 25 years. He says the new coating will help prevent rust on the aging structure. He says Kentucky plans to spend $36 million over the next three years on repairs and maintenance to the bridge, which connects Covington and Cincinnati.

Crumbling road surfaces in the region are costing individual drivers there some $1,700 a year. Pilcher says that total comes from auto repairs due to potholes and poor road conditions as well as time lost sitting in traffic.

Pilcher says an investigation by his newspaper has revealed concerns about a sexually charged atmosphere within the Northern Kentucky University men’s basketball program. He says during the 2014-2015 season, three players faced a complaint of an alleged sexual assault. Pilcher says the players were eventually exonerated, but school investigators did find culture problems in the basketball locker room. He says players and coaches received sensitivity training to address the sexually charged atmosphere.

As that incident unfolded, the school was also preparing to transition from NCAA Division 2 status to Division 1 status, and the previous basketball coach was fired. Pilcher reports that NKU says the termination and the investigation of the sexual assault charges were not linked. But he says school officials had several high-level meetings to discuss the allegations even before a formal complaint was filed. He says the NKU story, along with sex-related allegations against the University of Louisville men’s basketball team and the Baylor University football program, raise questions about whether college athletes get preferential treatment in such investigations.

Geoffrey Mearns, who has been president of NKU for nearly five years, is leaving the school next month to become president of Ball State University. Pilcher says Mearns has helped grow NKU during his brief tenure and he advocated for outcomes-based funding for public universities. 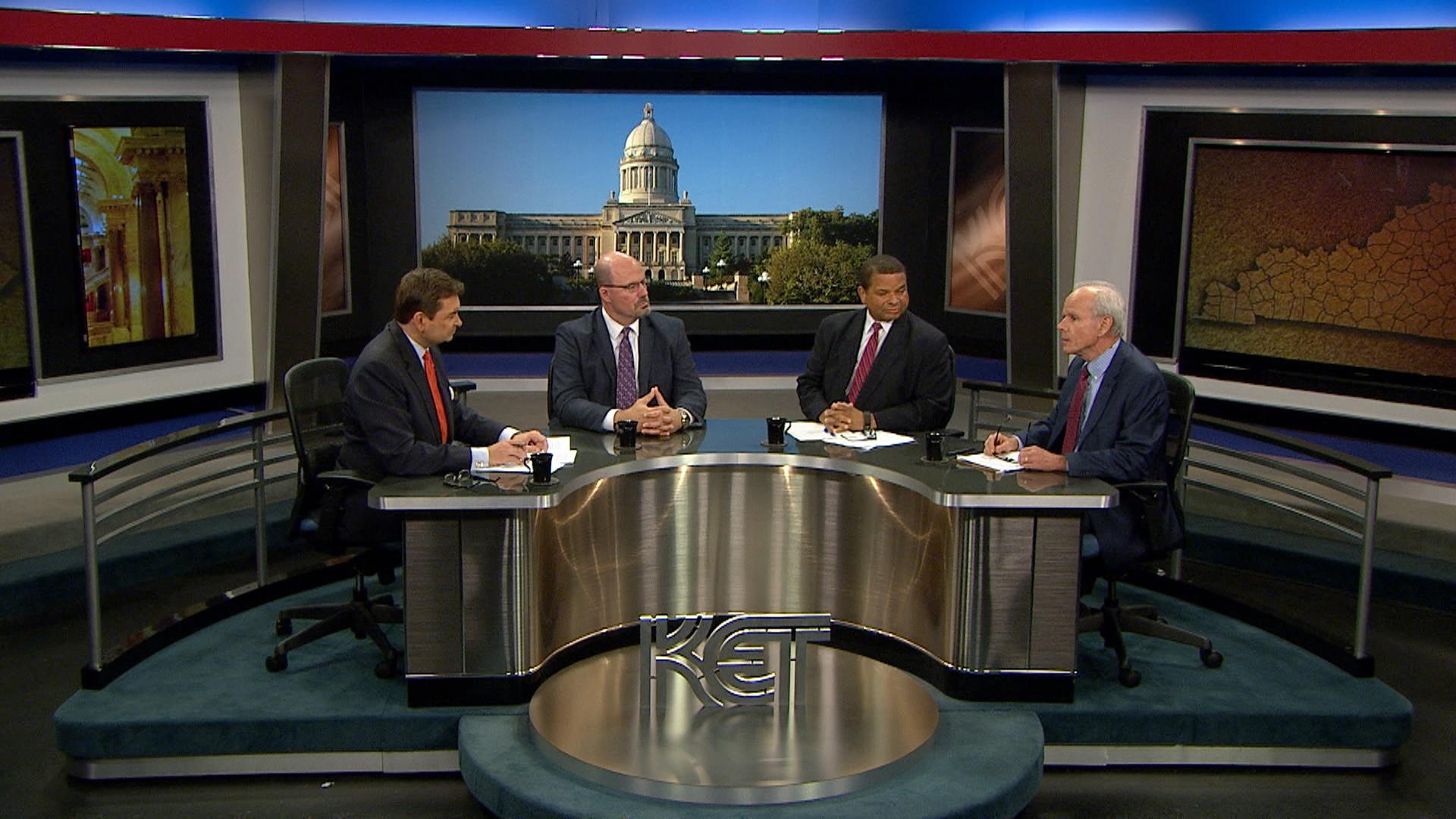