The journalists on KET’s Comment on Kentucky explored why the president turned on one of his key Republican allies and what that may mean for the commonwealth’s senior senator. They also discussed Gov. Matt Bevin’s push to land a new auto assembly plant as well as other news from around the state.

Trump, McConnell Exchange Criticisms
Pres. Trump has taken shots at a number of his fellow Republicans, from those he faced in the GOP presidential primaries, to Sen. John McCain and U.S. Attorney General Jeff Sessions. But Trump had never taken on Senate Majority Leader Mitch McConnell, according to Adam Beam of the Associated Press.

That changed last week after McConnell told a northern Kentucky Rotary Club that the president had “excessive expectations” about the legislative process. Beam says the two Republicans had a brief but tense phone call after news of McConnell’s remarks reached Washington. Then Trump took to Twitter to attack the senator, saying McConnell should get back to work, says Beam. He adds that it’s highly unusual for a sitting president to go after a Senate majority leader of his own party.

Despite being polar opposites in demeanor and personality, Beam says the two men need each other to be successful in governing. Instead of responding directly, Beam says McConnell had members of his caucus tweet words of praise and support for the majority leader. Beam says McConnell then retweeted those messages on his campaign account, which had been dormant for several months.

Even as McConnell endures criticism for the Senate’s failure to pass legislation to repeal and replace the Affordable Care Act, the move for a new health care bill may not be dead yet. In his speech at the Fancy Farm picnic earlier this month, McConnell indicated he would be open to working with Senate Democrats on the issue. Beam says McConnell cautioned that he would not accept a bailout for insurance companies and that any proposals Democrats offered would have to be “real reforms.”

Business Updates
Gov. Matt Bevin wants Kentucky to be the home of a new $1.6 billion auto assembly plant that will be jointly operated by Toyota and Mazda. Chris Otts of WDRB-TV in Louisville says Bevin has a personal relationship with Toyota Motor Corp. President Akio Toyoda that he hopes to draw on to lure the plant here.

Although Mississippi appears to be the early frontrunner for landing the plant that would employ 4,000 people, Kentucky does have some advantages in the competition. Otts notes that the state is centrally located, has an existing base of auto parts manufacturers, and is already home to the largest Toyota plant in the nation. He says Bevin has a site in mind for the new factory: 1,500 empty acres adjacent to Interstate 65 in Hardin County that the state acquired years ago when trying to lure another auto maker to the commonwealth.

The commonwealth is investing $15 million in an aluminum rolling mill to be built near Ashland. Otts says the state will own at least a 20 percent stake in Braidy Industries, which will make it one of the largest shareholders in that company. Otts says the state’s investment in aluminum manufacturing is somewhat unusual. He says taxpayer dollars have been used to back small, start-up businesses such as companies founded by university researchers.

Construction on the $1.3 billion facility is slated to begin by mid-2018 and the mill should be operational by 2020. If Braidy fails to meet those deadlines, Otts says the state could seek a return of its investment funds.

Some have questioned the hiring of a former Bevin administration staffer to work for the company. Otts says the same month the state finalized its investment in Braidy Industries, the company hired a former member of the governor’s executive cabinet to be a senior vice president of government relations. Bevin’s office says Nathan Haney left the administration months before joining Braidy and denied any connection between Haney’s hiring and the state’s investment, according to Otts.

Other News Around the State
A new report shows Appalachia again falling behind on important health indicators. Beam says the study in “Health Affairs” put Appalachian states roughly on par with national averages for infant mortality and life expectancy in 1990. But by 2013, infant mortality in Appalachia was 16 percent higher, and life expectancy was more than two years shorter. He says the report places much of the blame on high rates of smoking in the region.

President Trump says the opioid crisis is a “national emergency,” but he hasn’t yet signed a declaration to make that official. Beam says such a declaration would allow federal disaster money and health workers to be directed to the fight against opioid addiction. He says regulators could also grant Medicaid waivers to cover more drug treatment options.

A former public health official at the University of Kentucky has filed suit against the school, claiming he was fired for criticizing a plan to overhaul the state’s Medicaid program. Linda Blackford of the Lexington Herald-Leader says Raynor Mullins, who worked at the UK College of Dentistry, warned his superiors that he intended to speak out about the Bevin Administration’s proposal to change Medicaid. Mullins alleges that unnamed members of the Bevin Administration ordered officials at UK to silence him.

Blackford says the governor’s office denies any knowledge of Mullins, yet they later released details of campaign donations the dentist made to former Gov. Steve Beshear and his son, current Attorney General Andy Beshear.

The University of Louisville Board of Trustees has formed a committee to determine whether to purse legal action to recover funds misspent by the school’s nonprofit foundation. Otts says as much as $100 million could be at stake. He says the committee will explore who could be sued, the likelihood of recovering any money, and how much litigation would cost. 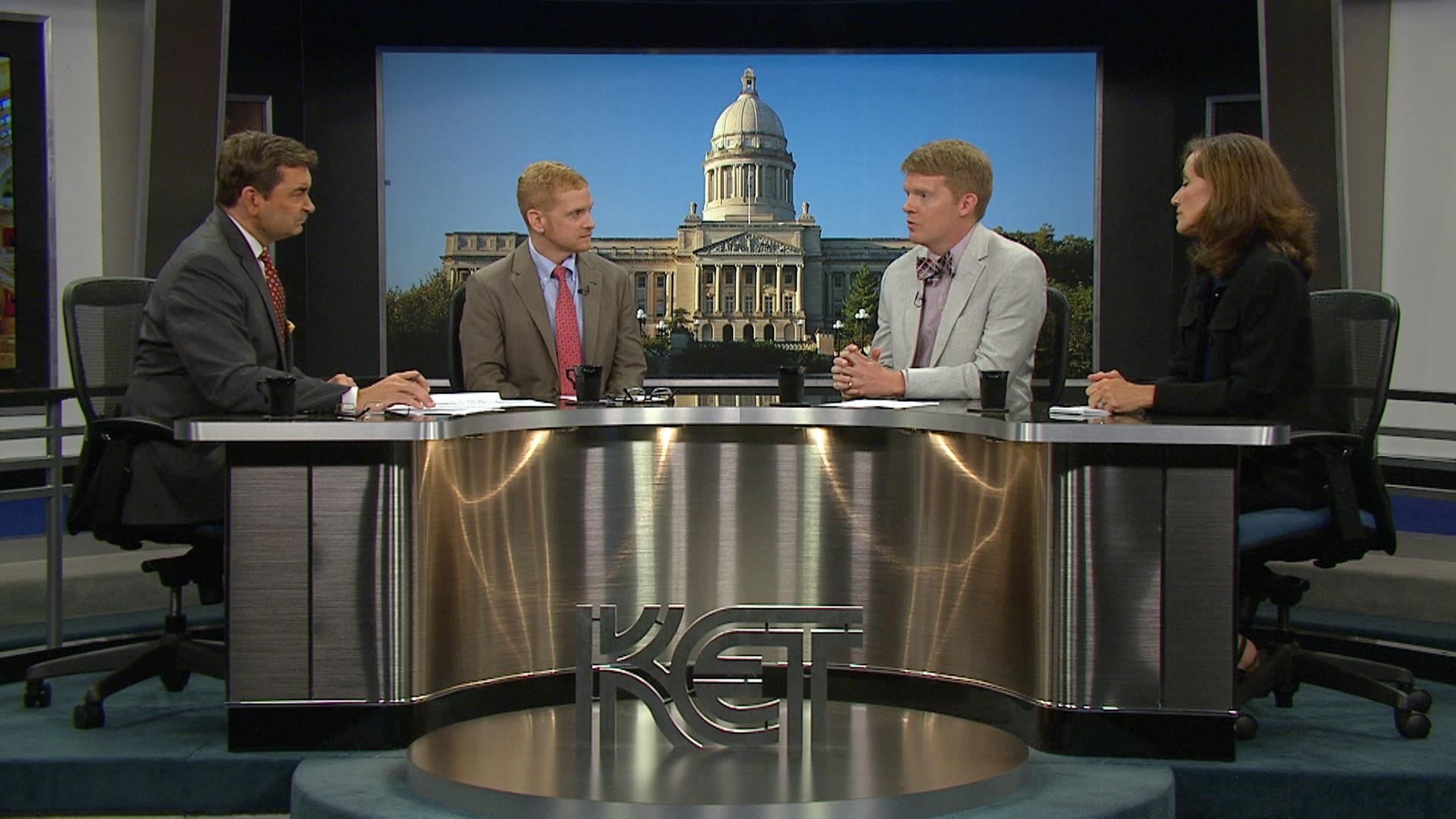