Journalists from around the state discuss news of the week with host Bill Bryant, including a planned special legislative session on public pensions in October and a new report on public health challenges in Appalachia. Scheduled guests: Bill Estep from the Lexington Herald-Leader; Lisa Gillespie from WFPL Public Radio in Louisville; and Tom Loftus from the Louisville Courier-Journal.
S43 E41 Length 26:33 Premiere: 8.25.17

The future of Kentucky’s public employee retirement systems could become clearer this week as consultants release their recommendations for the beleaguered plans and state House members gather to prepare for a potential special legislative session on pension reform.

The journalists on KET’s Comment on Kentucky discussed the latest on the crisis as well as updates in state politics and health news.

Lawmakers to Hear Pension Reform Options
“We’re all on the hook” is how Tom Loftus of the Louisville Courier-Journal describes the pension crisis. The unfunded liabilities in the public employee and teacher retirement systems totals about $40 billion, but Gov. Matt Bevin contends the debt is much higher. Loftus says the governor believes the unfunded liabilities are actually total closer to $64 billion.

The state must pay increasing sums of money into pension systems to keep them afloat and to keep payments going to retirees. Loftus says $624 million in general fund dollars went to pension benefits 10 years ago. This year it will be $1.5 billion, and next year it will be even higher, he says. That means there will be less money to fund other critical needs in the state, including opioid addiction treatment, public education, and social services.

Monday afternoon, Aug. 28, in Frankfort, the PFM Group will deliver its final audit report to the Public Pension Oversight Board. Loftus says that will include recommendations and options for reforming the systems. Then on Tuesday, Aug. 29, state representatives will meet to discuss their plans for a special legislative session on the pension crisis.

Gov. Bevin is expected to call lawmakers into session in October. Although the governor originally proposed tackling both pension and tax reform in the same special session, Loftus says the current plan is to focus solely on the retirement plans.

One reform option that might be floated is to put future hires into a 401(k)-type plan. Loftus says pensioners, state employee advocates, and other groups oppose that idea because it could result in reduced benefits for retirees. It could also further cripple the existing retirement system since new hires would no longer be paying into it to help keep it funded.

There are three basic causes for the unfunded liabilities, according to Loftus. He says governors and lawmakers failed to allocate sufficient moneys to the plans, especially during the recession years. In 15 of the last 22 years, the General Assembly didn’t fully fund the actuarially required contributions (ARC) to the retirement systems, says Loftus.

A second problem is that the actuaries failed to set the ARC payments high enough. Loftus says the governor contends the actuaries were overly optimistic in their revenue projections for the plans, which caused them to ask for too little money from state coffers. Trustees of the Kentucky Retirement Systems recently lowered their assumptions for several financial projections to make them more realistic.

Finally Loftus says lawmakers approved benefit enhancements for retirees without properly funding them. He says those cost-of-living adjustments during the boom years of the 1990s have also contributed to the unfunded liabilities the systems face today.

Health News
The Trump administration has halted a federal study into the health impacts of living near surface mining operations. Bill Estep of the Lexington Herald-Leader says previous research found elevated health problems such as cancer, heart disease, and birth defects among people who live near mountaintop removal sites and other surface mines. But studies funded by the coal industry found no such links.

Estep says eastern Kentuckians hoped the new study would resolve lingering questions about the issue. But the Trump administration put a hold on funding for the research being conducted by the National Academies of Sciences, Engineering, and Medicine after several public meetings had already been held in the region. Estep says officials want to review all such federal grants, but he says coal-country residents fear the review is simply a precursor to killing the surface mining study.

A new report paints an even more troubling picture of health problems in eastern Kentucky. Estep says the study from the Appalachian Regional Commission showed that heart disease deaths in the state’s Appalachian counties are 45 percent higher than the national rate; cancer-related deaths are 35 percent greater, and deaths due to overdoses and poisonings are 141 percent above the national rate.

While there have been improvements in some health outcomes in the region, Estep says those gains are coming much slower in Appalachia when compared to the nation as a whole. He says the primary drivers of poor health in eastern Kentucky continue to be high smoking rates, substance abuse, physical inactivity, and a lack of access to health care providers.

In Metro Louisville, city officials have filed a lawsuit in federal court against three wholesale drug distributors. Lisa Gillespie of WFPL Radio in Louisville says officials allege the companies contributed to the opioid crisis that led to 364 overdose deaths in the city last year. The distributors serve as middlemen between pharmaceutical manufacturers and retail drug stores. Gillespie says federal law requires the distributors to report suspicious increases in orders for opioid-based drugs. The lawsuit alleges the distributors failed to do that.

Gillespie also reports that pregnant women who have an addiction to opioids face difficult choices. She says if they try to get clean on their own, they risk losing their fetus during withdrawal. If they seek a medication-assisted treatment, their child can be born with its own dependency on the drug used to treat the mother’s addiction. And if they do nothing to address their addiction, the mother risks having her newborn taken by social services.

Political Roundup
Political leaders spoke at the annual country ham breakfast at the Kentucky State Fair on Thursday. U.S. Sen. Mitch McConnell told attendees that he and President Donald Trump have many shared political values, according to Gillespie. But that same morning, the president tweeted more criticisms of the Senate Majority Leader.

Recent news reports say the two men aren’t talking after Trump lashed out at McConnell for failing to pass health care legislation in the Senate, and the president then made remarks about white supremacist groups that reportedly angered McConnell. But McConnell says his staff is in regular contact with the White House, according to Estep. He says a showdown likely looms between the two Republicans over debt ceiling negotiations and a potential government shutdown.

Gillespie says McConnell is in a tough spot over efforts to repeal and replace the Affordable Care Act. She says some Trump voters in Kentucky are angry that repeal efforts have stalled while other voters are worried about how repeal would affect their health coverage.

State Sen. Whitney Westerfield announced that he will make a second bid for Kentucky Attorney General. The Hopkinsville Republican narrowly lost to Democrat Andy Beshear in the 2015 campaign. Loftus says Westerfield will again prove to be a formidable challenger for Beshear, should he decide to seek reelection.

State Rep. Sannie Overly (D-Paris) will step down as chair of the Kentucky Democratic Party. Loftus says the party is in desperate need of leadership ahead of the 2018 elections. Meanwhile fellow Democrat Rep. Gerald Watkins of Paducah says he will not seek another term in the state House. Loftus says that western Kentucky seat is vulnerable to flipping to Republicans next year.

And Senate Democrats have picked Sen. Dennis Parrett of Elizabethtown to be the new Minority Whip. He replaces Sen. Julian Carroll (D-Frankfort), who was forced out of the leadership post last month following allegations that he made unwanted sexual advances against a young man in 2005. 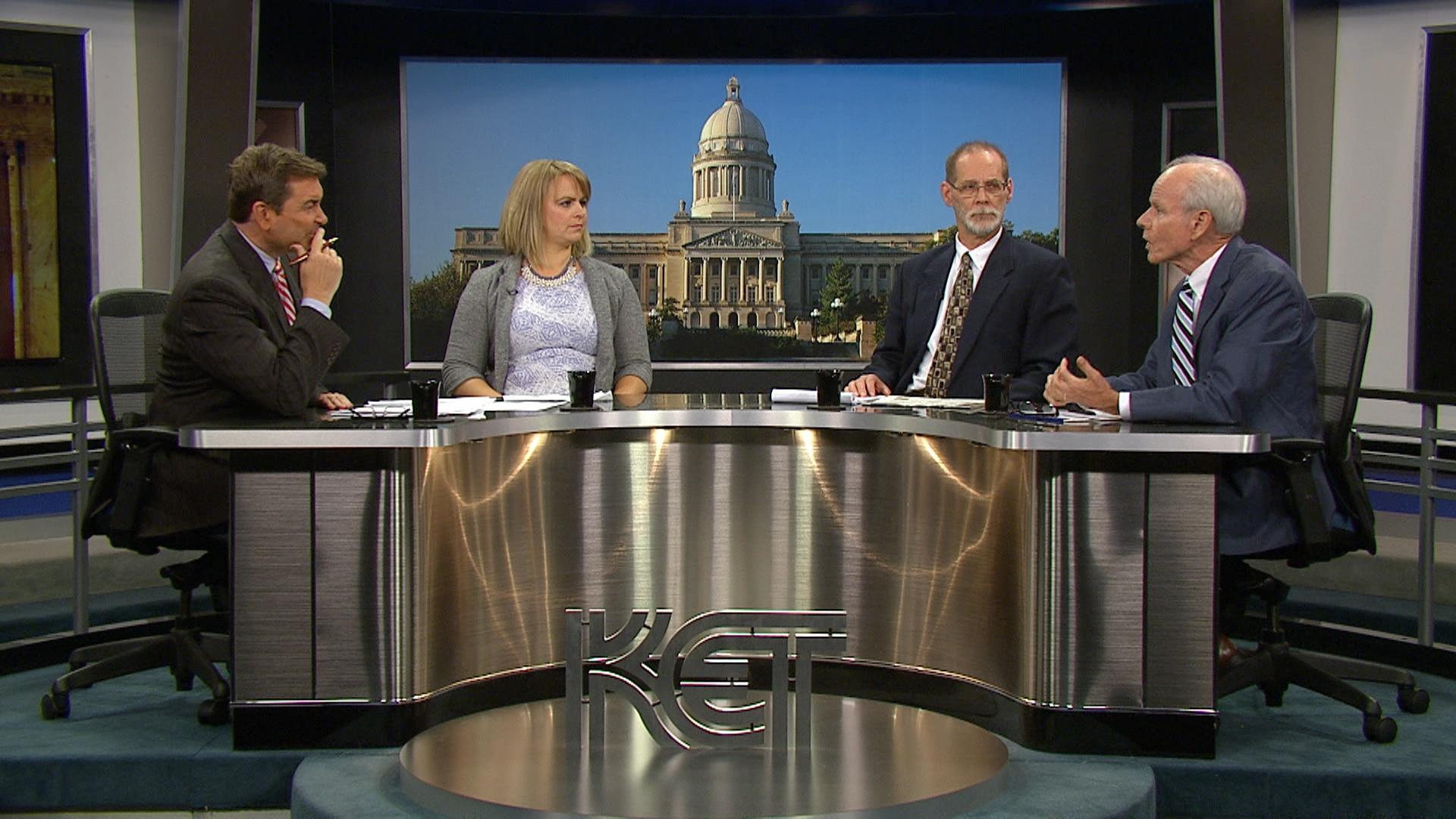