On Friday, Rowan County Clerk Kim Davis petitioned to the U.S. Supreme Court to protect her from being forced to issue marriage licenses to same-sex couples. She is one of three county clerks in the commonwealth who stopped issuing marriage licenses because they oppose same-sex unions based on their religious beliefs.

A temporary stay Davis requested earlier this month ends today, and it’s uncertain whether she could she face prosecution if she continues to refuse licenses to straight and gay couples seeking to marry.

The panel on this weekend’s Comment on Kentucky discussed the latest in the Davis case and the political ramifications it could have in the gubernatorial race.

Could Davis Face Prosecution?
The move is the latest in a legal battle between Davis and the American Civil Liberties Union of Kentucky that’s been brewing for nearly two months. The ACLU sued Davis on behalf of several straight and gay couples denied marriage licenses by the Rowan County Clerk. Davis lost that case and her appeal to the U.S. Sixth Circuit Court of Appeals.

With her options dwindling, attorneys representing Davis filed the emergency application with the U.S. Supreme Court. Kevin Wheatley of cn|2 says the petition won’t go before the full court, but will be reviewed by Justice Elena Kagan, who was part of the 5-4 majority that overturned state bans on gay marriages in late June.

A ruling from Justice Kagan could take months, so if Davis continues to deny marriage licenses she could face prosecution locally. Wheatley says the Rowan County Attorney has requested that Attorney General Jack Conway appoint a special prosecutor to investigate Davis on charges of official misconduct for not fulfilling the duties of her office.

Sam Youngman of the Lexington Herald-Leader says that puts Conway in the uncomfortable position of pushing the prosecution of Davis, who is a fellow Democrat. Conway is already facing criticism from conservatives for not appealing a federal judge’s ruling in 2014 that overturned Kentucky’s constitutional ban on same-sex marriages. But Youngman says that if Conway refuses to appoint a special prosecutor, he risks losing liberal Democrats who feel they shouldn’t have to compromise on the gay marriage issue. Youngman says the longer the marriage license debate lasts, the harder it could be for Conway to maintain a coalition of liberal and conservative Democrats behind his gubernatorial bid.

Meanwhile, the Kentucky County Clerks Association is drafting legislation that would remove a clerk’s name from all marriage licenses. Kevin Wheatley says one option includes letting couples download a generic license application form from a state website. But even that option is not without problems. Wheatley says some officials fear that would make it harder to verify the parental signatures of underage couples seeking to marry.

Paul Puts Hopes on Caucus Wins
Even though the executive committee of the Republican Party of Kentucky did approve Sen. Rand Paul’s request for a presidential caucus next spring, Sam Youngman says the decision wasn’t guaranteed. The committee met August 22 in Frankfort and heard a special appeal from Paul on the matter. But Youngman says Paul’s “trust me” speech fell flat with the group because Paul had already failed to transfer $250,000 he promised to send the party to offset the costs of holding the caucus, which would benefit his presidential candidacy.

Youngman reports that aides for Sen. Mitch McConnell brokered a compromise with the group that gives Paul until Sept. 18 to pay the state GOP. If Paul fails to meet that deadline, the party will revert to its usual primary in late May. The Kentucky caucus is scheduled for Saturday, March 5.

Youngman also says Paul’s presidential campaign strategy is evolving following what he calls a summer of struggles for the Republican. Instead of placing his hopes on winning New Hampshire, Youngman says Paul is shifting his focus to western caucus states that supported his father, former U.S. Congressman Ron Paul of Texas, in his presidential bids. The junior Paul has made recent visits to Alaska, Wyoming, Idaho, and Washington. Youngman says success in those states could give Rand Paul’s candidacy more life even if he fails do to well in New Hampshire and other early voting states.

Merger Challenges and Other Business News
Shareholders of Humana and Aetna will vote in October on the proposed merger of the health insurance giants. Grace Schneider of the Louisville Courier-Journal say shareholders are expected to ratify the $37 billion acquisition of Humana by Aetna, which has already been unanimously approved by the boards of both companies.

But Humana employees remain remained concerned about possible job losses that could result from the merger. Schneider says Humana currently has about 13,000 employees in Jefferson County along with another 1,000 or so contractors. Louisville is set to host the combined company’s government operations, including Medicaid, Medicare Advantage, and the military health insurance program Tricare. Schneider says a representative for Aetna told lawmakers last week that he believes the number of employees in Louisville could actually increase.

As the Humana deal moves toward completion, executives at Louisville’s Appliance Park await word on a U.S. Department of Justice antitrust lawsuit that could block the acquisition of that General Electric facility by Electrolux. Schneider says federal authorities fear that would lead to a monopoly in the appliance market, leaving homebuilders with only two companies from which to purchase: Electrolux and Whirlpool. She says there’s no indication when the lawsuit may be decided.

In another antitrust action, Marathon Oil has asked a federal judge to dismiss Kentucky’s lawsuit against the company. Schneider says officials at Marathon contend that the antitrust action is baseless and that there’s nothing wrong with the oil distributor’s business methods. The suit filed by state Attorney General Conway alleges Marathon engages in monopolistic practices. 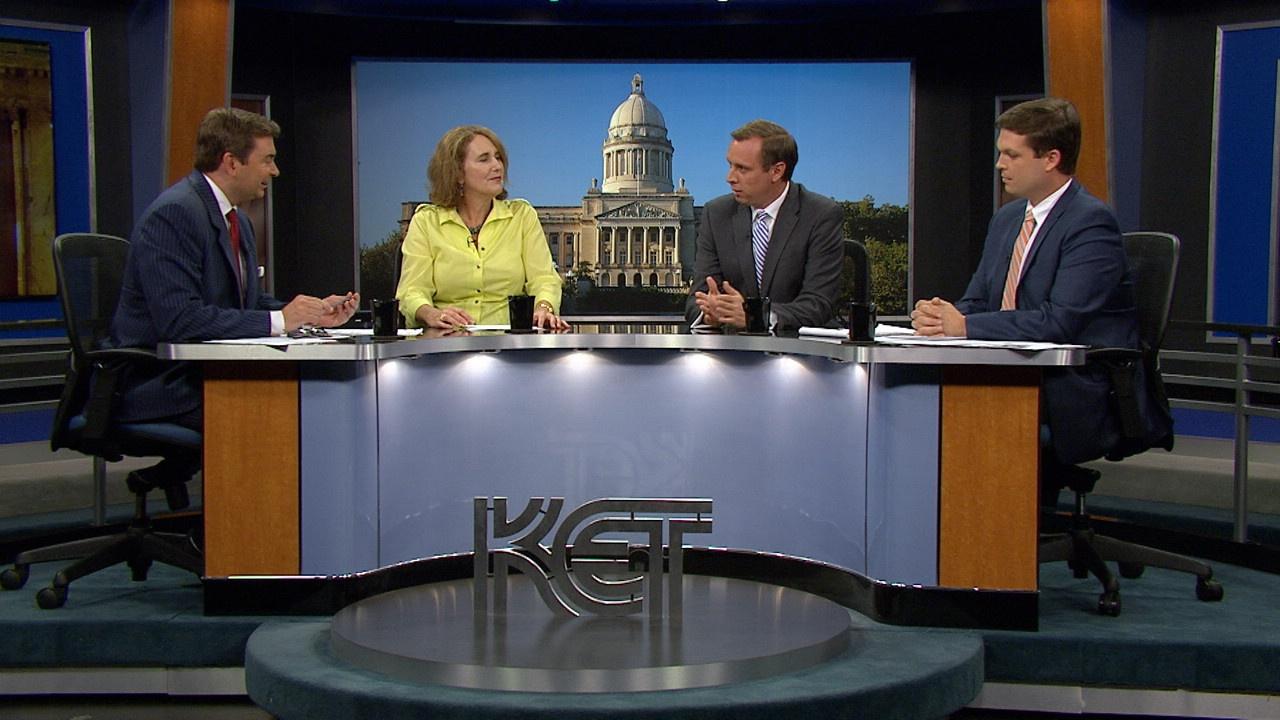