Although he got less airtime than his fellow candidates, Sen. Rand Paul left his mark on the first GOP presidential debate last Thursday night. The Kentuckian engaged in heated exchanges with front-runner Donald Trump and New Jersey Governor Chris Christie.

But will that be enough to boost Paul’s profile among voters and donors? The panel on Comment on Kentucky discussed the prospects for Paul’s presidential bid.

Paul Comes Out Swinging
Michael Gossum of WBKO-TV in Bowling Green attended the event in Cleveland. He spoke to Paul before the debate and says the senator was relaxed and feeling great. Gossum says Paul came out swinging when he challenged Trump for not ruling out a run as an independent candidate if the businessman doesn’t secure the Republican nomination. Paul also challenged Trump on his support of a single-payer health care system, and confronted Christie over personal privacy issues.

Those fireworks came in the first hour of the televised debate, and Gossum says Paul’s presence faded in the second half of the program. According to an analysis done by the PBS NewsHour, Paul only got 5:06 of total speaking time. That compares to Trump who accumulated just over 11 minutes of airtime, and former Florida Gov. Jeb Bush who spoke for 8:40.

Lawrence Smith of Louisville’s WDRB-TV says the senator made good use of his limited airtime by creating memorable moments for viewers. But Lawrence says he’s not sure whether it will be enough to keep Paul’s campaign afloat.

Jack Brammer of the Lexington Herald-Leader says Benton has stepped aside from his involvement with Harmon’s and Rand Paul’s campaigns while he fights the charges. Brammer adds that Paul questioned the timing of the indictment, saying it was meant to embarrass him ahead of last week’s presidential debate.

Meanwhile Kentucky Republicans are finalizing their plans for a presidential caucus on March 5, 2016. That will allow Paul, who is also running for reelection to his Senate seat, to side-step the state law that precludes a candidate from running for multiple federal offices on the same ballot. Brammer says some party officials are worried about the prospect of spending upwards of $500,000 to host the statewide caucus. Plus he says there’s some concern about whether Paul will still be a viable candidate at that point in the presidential election cycle. The final vote to approve the caucus is expected on August 22.

Other Campaign News
Independent gubernatorial hopeful Drew Curtis is scheduled to submit some 8,000 signatures to the Secretary of State’s office today to make his candidacy official. Brammer says Curtis has both liberal and conservative views on issues, and that it’s too early to say which major-party candidate might be most hurt by the independent. The latest Bluegrass Poll showed Curtis drawing about 8 percent among likely voters.

Pundits are still debating Matt Bevin’s performance at the recent Fancy Farm political picnic. The Republican was highly critical of the event in his speech, which Lawrence Smith compares to being invited into someone’s home and then insulting the host. Brammer says Bevin’s speech illustrates his view that the Republican candidates weren’t as organized and polished in their speeches this year as they have been in the past.

And questions still linger about the future for Agriculture Commissioner James Comer, who will leave office in December. Michael Gossum reports that Comer is interested in running for the 1st district congressional seat once current U.S. Rep. Ed Whitfield retires. Gossum says local GOP leaders think the Republican could do well in the region, especially in the district’s eastern counties around Comer’s hometown of Tompkinsville.

Controversial Statue To Remain….for Now
The Kentucky Historic Properties Advisory Commission will allow the statue of Confederate President Jefferson Davis to stay in the state Capitol Rotunda. Jack Brammer says the group thought the presence of the Davis statue along with the statue of Abraham Lincoln provides a unique educational opportunity for visiting school children. He says the commission created a special committee charged with developing materials to provide the proper historical context for the statues.

African American leaders were quick to criticize the decision. Brammer reports that Raoul Cunningham, president of the Louisville NAACP chapter, said the commission “whitewashed” the controversy by using education as the rationale to keep the Davis likeness in its current location. Brammer adds that Cunningham pledged to push legislation in the 2016 General Assembly to remove the statue from the capitol. 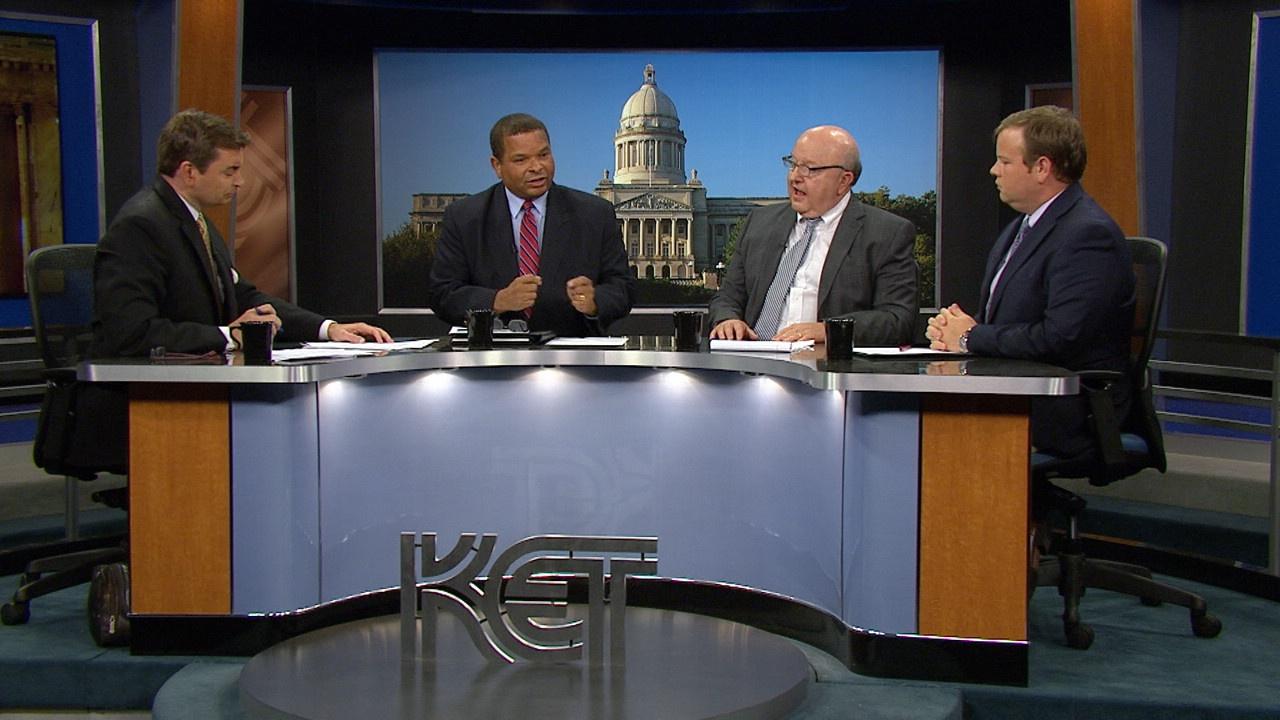