Journalists from around the state discuss news of the week with host Bill Bryant. Guests: Jack Brammer from the Lexington Herald-Leader; Lawrence Smith from WDRB-TV in Louisville; and Deborah Yetter from the Louisville Courier-Journal.
S43 E4 Length 24:46 Premiere: 12.2.16

President-elect Donald Trump’s plans to improve the nation’s infrastructure and replace the Affordable Care Act could mesh well with priorities that state officials are touting.

The journalists on Comment on Kentucky discussed how the incoming Trump administration could impact the commonwealth. They also previewed several issues the General Assembly might tackle in the 2017 legislative session.

Trump and Kentucky
On Tuesday, President-elect Donald Trump appointed Elaine Chao to be his secretary of transportation. Lawrence Smith of WDRB-TV in Louisville says Chao is a highly qualified Washington insider, having served as labor secretary under President George W. Bush, and deputy transportation secretary under President George H.W. Bush. Chao is also the wife of Senate Majority Leader Mitch McConnell of Louisville.

Jack Brammer of the Lexington Herald-Leader says the state could benefit from having Kentuckians in those two key positions. A priority for the president-elect is infrastructure spending, and Brammer says local officials hope that will include funding for a new bridge to Cincinnati and construction of Interstate 66 through southern Kentucky.

During his speech Trump reiterated his pledge to repeal and replace the Affordable Care Act, and promised that there would be no gap between Obamacare and whatever legislation is enacted to succeed it. Deborah Yetter of the Courier-Journal says the prospects for Gov. Bevin’s Medicaid waiver request have improved with Trump’s victory.

The governor’s proposed overhaul is based in part on Indiana’s Medicaid expansion, which Yetter says includes copayments and premiums as well as health savings accounts. She says the consultant who helped craft Indiana’s plan also worked with the Bevin administration on its proposal. That consultant, Seema Verma, is now Trump’s pick to head the Centers for Medicare and Medicaid Services, the federal agency that approves Medicaid program waivers.

Bevin’s plan includes a pilot project to enable Medicaid to cover substance abuse treatment services at mental health facilities. Yetter says that part of the governor’s request could be granted outside of the regular waiver process. Brammer says the Obama administration could approve that project even before the transition to a Trump administration.

2017 General Assembly Session
State Republicans have selected the team that will lead the new GOP majority in the state House of Representatives. Brammer says Rep. David Osborne (R-Prospect) will be the speaker pro tem; Rep. Kevin Bratcher (R-Louisville) will be the majority whip; Rep. David Meade (R-Stanford) will be the majority caucus chair; and Rep. Jonathan Shell (R-Lancaster), who turned 29 years old last week, will be the new majority floor leader. Brammer says he thinks new House Speaker Jeff Hoover (R-Jamestown) will like working with this team of moderate Republicans.

This group signals a shift in the House power base from eastern Kentucky to Jefferson County and central Kentucky, according to Lawrence Smith. He says Louisvillians have long complained about being underrepresented in House leadership.

Smith also reports that Hoover says his biggest job as incoming speaker is to manage the expectations of state Republicans who have worked for decades to gain a majority in the House. Both Hoover and Senate President Robert Stivers (R-Manchester) have signaled a desire to focus the 2017 General Assembly session on jobs and the economy and less on social issues.

Lawmakers are expected to discuss charter school legislation in the new year. Smith says  Kentucky Education Commissioner Stephen Pruitt convened a day-long information session for school superintendents about the charter movement. The schools operate in 43 states under a variety of organizing principles, and Smith says Pruitt is concerned about how they could be implemented in Kentucky. The commissioner wants to know who would authorize charters to form, who would control them, how they would be funded, would they be for-profit or non-profit operations, and how they would be held accountable.

In previous legislative sessions, Republicans have proposed allowing Jefferson and Fayette counties to create charter school pilot projects. Brammer says he thinks that idea will pass in the 2017 session and then Republicans will follow up with full enabling legislation in 2018.

The state’s pension problems continue to be a hot topic in Frankfort. The unfunded liabilities in the public employee and teacher retirement systems have grown to $32.6 billion. Officials with the Kentucky Teachers’ Retirement System had to sell $650 million in assets to be able to make benefit payments this year.

Brammer says a group of teachers has sued Gov. Bevin and legislators to force the state to fulfill its fiscal responsibilities to retired educators. But those teachers should be careful what they wish for, says Brammer. He contends KTRS may get the funding it needs, but lawmakers could reduce benefits and make other unpopular changes for future retirees.

Health and Welfare Issues
Diabetes: The rate of Kentuckians with diabetes continues to climb. Yetter says the state is now third in the nation for those with diabetes, and about 12 percent of Kentucky adults have the disease. She says health care advocates are concerned about Gov. Bevin’s plan to cut routine vision and dental care from Medicaid coverage. They say those exams can lead to the discovery of diabetes in patients who might not otherwise seek regular primary care.

Social Workers: The Cabinet for Health and Family Services is struggling to keep state social workers on the job. Yetter says stress over huge workloads is causing some CHFS employees to resign after only a few weeks on the job, and some new hires quit even before their first day at work. Social workers manage the cases of more than 8,000 Kentucky children who have been removed from their homes because of abuse or neglect.

Gun Violence: Metro Louisville police officials are struggling to reduce gun violence there. As of Friday, 116 people in Jefferson County have been shot to death this year, according to Smith. Yetter says Metro Council members are growing impatient with police efforts to address the problem. Gov. Bevin also weighed in on the issue last week. Brammer reports the governor opposes any new gun restrictions because he argues that gun violence is a cultural, economic, and spiritual problem. 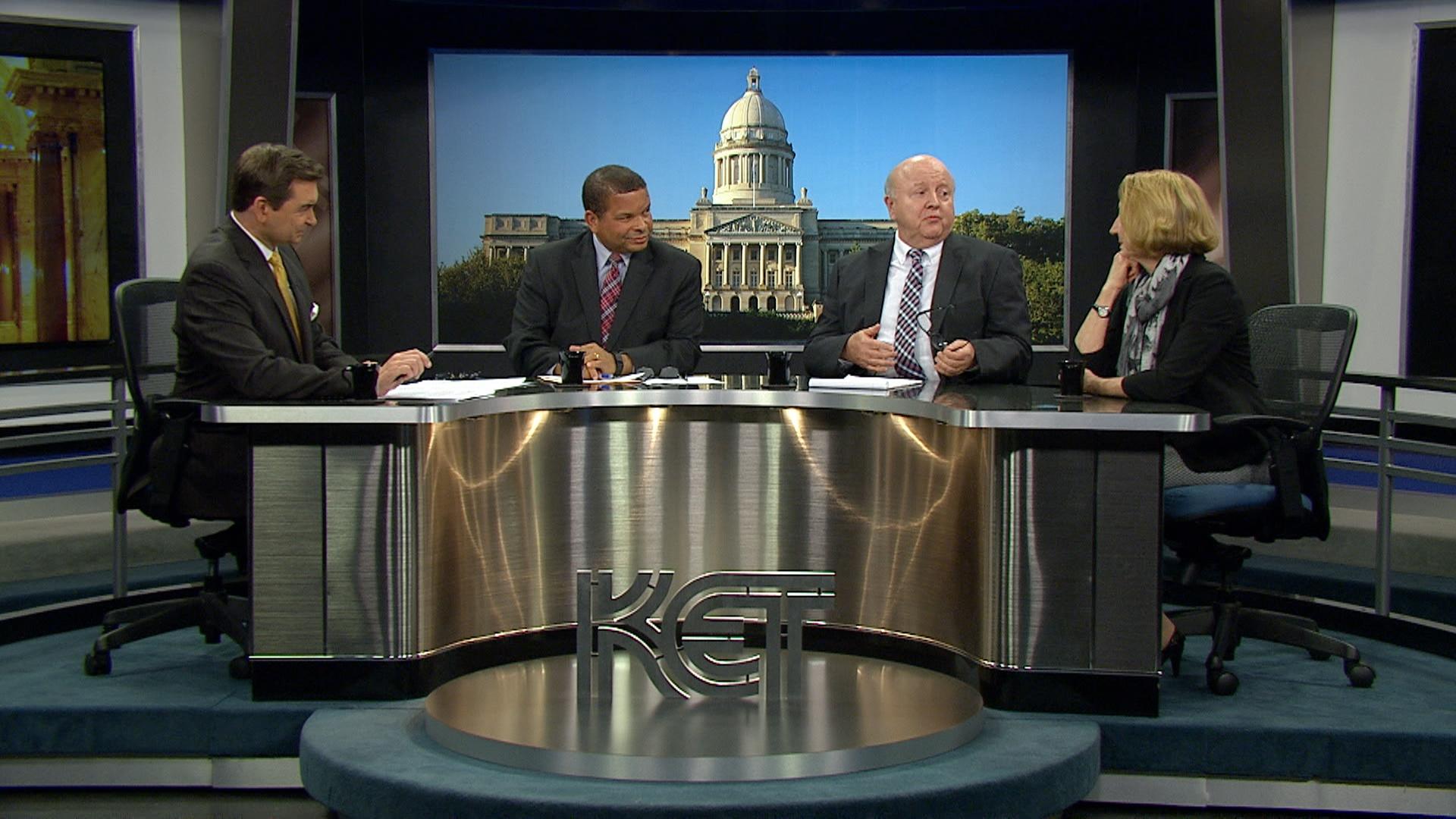