Can Rand Paul Run for Two Offices at the Same Time?

Last week, Rand Paul announced that he will seek a second term in the U.S. Senate. Now the question is, will he run for any other office in 2016?

The panel on this weekend’s Comment on Kentucky discussed the political prospects for Kentucky’s junior senator, and the mechanics that might make a dual run possible.

National Politics
State law precludes a candidate from simultaneously running for two federal offices, which complicates Paul’s effort to seek re-election to the Senate and pursue the GOP nomination for president. While he has yet to formally announce for the presidency, the Bowling Green Republican remains a frequent visitor to Iowa and other early voting states.

Nick Storm of cn|2 says there’s little chance that Kentucky legislators will change the law to benefit Paul since Democrats control the state House and the governor’s office. He says Paul could challenge the law in court, or Kentucky Republicans could nominate Paul for president through a statewide caucus.

Joseph Gerth of the Louisville Courier-Journal questions whether some Republicans would support a caucus process because it’s expensive for the party and time consuming for voters. They would have to attend meetings and listen to speeches instead of simply going to a voting booth to cast a ballot.

Meanwhile, Gov. Steve Beshear has been appointed to national task force to help Democrats recover from the losses the party suffered this year. Gerth says Beshear, as the only elected official on the group, will argue that Democrats should take more centrist positions on issues.

Frankfort Politics
Several new faces will be in leadership positions when the Kentucky General Assembly convenes for its 30-day legislative session next month. In the Republican-controlled Senate, Nick Storm says Sen. David Givens will be the new president pro tem and Sen. Jimmy Higdon will be majority whip.

Lawmakers are preparing legislation to consider in the short session. Storm says bills to address heroin addiction, dating violence, and pension system transparency are likely to resurface in this session.

Prospects for an expanded gaming bill grew dimmer, though, with last Friday’s announcement that a horse industry group will no longer support such legislation. Joe Gerth says the Kentucky Equine Education Project (KEEP) has consistently advocated for expanded gambling at racetracks. Now he says the group will focus on implementing and evaluating instant racing at tracks, which allows betting on historical races on a slots-like machine.

Education Updates
The Kentucky Board of Education gave Commissioner Terry Holliday an “outstanding” rating in his job performance for the year. Valarie Honeycutt Spears of the Lexington Herald-Leader says Holliday received good marks for improving college and career readiness among students, implementing a teacher evaluation system, and finding best practices around the nation to implement in the commonwealth.

Finally, Spears says about a dozen Kentucky school districts will pilot a program this winter that allows snow-bound students to do class work online. She says the schools can use the computer-based instruction to compensate for up to 10 snow days.

-The opinions expressed on Comment on Kentucky and in this program synopsis are the responsibility of the participants and do not necessarily reflect those of KET. 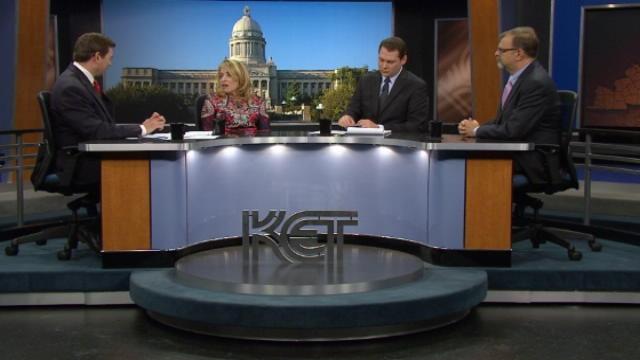