It could be a story that only Hollywood could write: A flamboyant small-town attorney defrauds the government of millions of dollars and then leads federal agents on a multi-state chase when he goes on the lam to avoid a lengthy jail stay.

But it’s true: the FBI is tracking Eric C. Conn, the eastern Kentucky lawyer who pleaded guilty to filing bogus Social Security disability claims and then vanished one June night before he could be sentenced.

The journalists on KET’s Comment on Kentucky updated the manhunt for Conn. They also discussed the latest on the health care debate, a possible criminal investigation of the University of Louisville Foundation, and other stories in the news.

Authorities Track Fugitive Lawyer
After weeks of being uncertain about his whereabouts, the FBI released surveillance video of Eric C. Conn in a New Mexico convenience store and a Walmart. John Stamper of the Lexington Herald-Leader says authorities believe Conn ditched his ankle monitor and fled the state in a truck he got from an unnamed co-conspirator. He says Conn abandoned the truck in New Mexico and it’s uncertain where he went next. He says the attorney had shaved his head in an attempt to change his appearance.

On Friday a judge sentenced Conn in absentia to 12 years in prison for his crimes. Stamper says the attorney could now face additional charges for breaking the terms of his plea agreement and being a fugitive.

Conn actually emailed Herald-Leader reporter Bill Estep several times, according to Stamper. He says it took a while for the paper to confirm that it was the missing lawyer. In those messages Conn claimed he flew out of the country the day after his disappearance, says Stamper. But he says the New Mexico surveillance video of Conn indicates that story was false.

Health Care Updates
As Senate Majority Leader Mitch McConnell struggles to get enough Republicans on board to repeal and replace the Affordable Care Act, Vice President Mike Pence visited Kentucky to drum up support for that effort.

Adam Beam of the Associated Press says Pence wants to “turn up the heat” on Republican senators like Kentucky’s Rand Paul who have yet to endorse the replacement bill. In Lexington on Wednesday the vice president said he thinks Paul will “do the right thing” when it comes time to vote on the Senate bill called the Better Care Reconciliation Act, according to Beam. But an hour later, Paul released a statement reiterating his plan to vote against the current version of the legislation. Beam says Pence needed stronger rhetoric in his speech if he truly wanted to push Paul into supporting the legislation.

Republicans contend Obamacare must be replaced because insurance premiums are increasing and the individual insurance market is collapsing, says Beam. At the same time, he says Kentucky is one of the states that has benefited the most from the ACA because thousands of Kentuckians got health insurance under the Medicaid expansion.

One study of the Senate Republican bill indicates that as many as half a million people in the commonwealth would lose coverage, says Stamper. He says the state also stands to lose billions of dollars in Medicaid funding, if the legislation is approved.

State officials are holding hearings to garner public comments about changes to the Bevin Administration’s request to federal regulators to change Kentucky’s Medicaid program. The new changes would tighten requirements for able-bodied Medicaid beneficiaries to work, volunteer, or go to school at least 20 hours a week. Beam says a hearing in Somerset on Friday seemed to elicit more questions about the program than comments about the governor’s proposed updates. A second hearing is scheduled for today in Frankfort.

Meanwhile the University of Kentucky has repaid $5 million to Medicaid and Medicare for questionable billing in a heart program. Stamper says UK Healthcare acquired a Hazard heart clinic several years ago as part of an effort to expand around the state. But a subsequent internal audit revealed the practice hadn’t properly documented the medical necessity of heart procedures conducted there. Instead of risking a federal investigation or criminal charges, Stamper says UK opted to repay the federal government for those claims. He says the school has ended its relationship with that practice.

Kentucky Justice Sec. John Tilley testified before a congressional committee last week about the extent of the opioid epidemic in the state. More than 1,400 Kentuckians died from drug overdoses last year. Beam says funding for treatment could be in jeopardy if Congress rolls back Medicaid funding as part of its health care reforms.

Grace Schneider of the The Courier-Journal says employers in Louisville can’t fill thousands of entry-level jobs in skilled trades because they can’t find enough workers who can pass a drug test.

U of L Investigation and Ethics Questions
The criminal division of the Kentucky Attorney General’s office has requested documents pertaining to questionable expenditures at the University of Louisville Foundation. Schneider says that only adds to the drama swirling around the embattled non-profit. New executives of the foundation are considering civil action to get back funds that may have been improperly spent.

A forensic audit of foundation activities under former president James Ramsey found that mysterious holds were placed on several bank accounts, email servers, and mobile phones, says Schneider. Auditors also discovered that a computer hard-drive used by Ramsey, who led both the foundation and U of L, had been scrubbed. Schneider says Attorney General Andy Beshear and his investigators want access to the information that was stored there.

Some GOP leaders want Beshear, a Democrat, to recuse himself from the U of L investigation. Beam says the Republicans argue that Beshear has the appearance of a conflict of interest because he worked for Stites & Harbison before becoming attorney general. That law firm represented the U of L Foundation during the period when the questionable spending occurred. Beam reports that Beshear dismissed the GOP’s concerns, saying he never personally did any work for the university or the foundation. 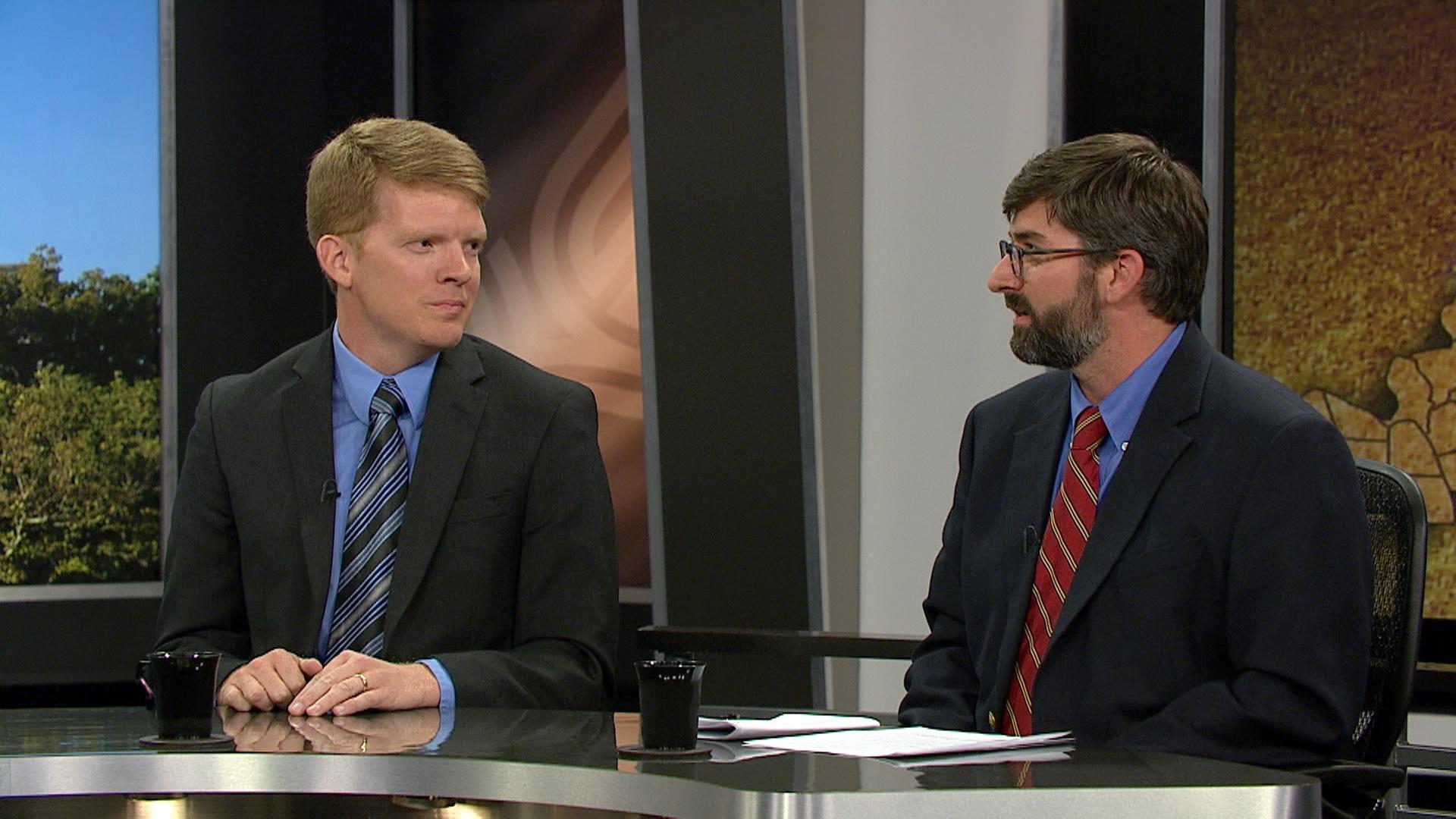