Bill Bryant and guests discuss the week's top news stories in the commonwealth, including Kentucky delegates at the Democratic National Convention and the latest court ruling on Gov. Bevin's remaking of the University of Louisville board of trustees. Guests: Deborah Yetter of the Louisville Courier-Journal; Adam Beam of the Associated Press; and Miranda Combs of WKYT-TV in Lexington
S42 E39 Length 26:32 Premiere: 7.29.16

The question of who is in charge at the University of Louisville took several twists and turns last week with a resignation followed by a court order to temporarily halt the reorganization of the school’s board of trustees.

The Comment on Kentucky journalists detailed the latest developments in the U of L leadership saga and recapped the week’s political news.

Ramsey Resigns, Board Reorganization Blocked
After lengthy negotiations Wednesday night, the newly restructured U of L Board of Trustees accepted the resignation of embattled president James Ramsey. In return for his immediate departure Ramsey will receive nearly $700,000.

Deborah Yetter of the Louisville Courier-Journal says Ramsey expanded and upgraded the school’s campus during his 14-year tenure. He’s also credited with improving academics at the university, which has seen an increase in the number of Fulbright Scholars and higher ACT scores among its students. But Yetter says Ramsey also faced a series of scandals at the school since 2008, which led to calls for his ouster. Yetter says Ramsey will remain president of the University of Louisville Foundation, the separate fundraising arm of the school.

Then on Friday, Franklin Circuit Court Judge Phillip Shepherd temporarily blocked any further actions by the new board of trustees and reinstated the previous board. Gov. Matt Bevin issued an executive order in mid-June to abolish the old board and reconfigure it with fewer members.

Yetter says Shepherd’s ruling argues that the governor’s use of unilateral power to terminate the existing board went beyond what state law allows. Citing Bevin’s claim to “unlimited authority,” Shepherd said a governor could use that argument to go as far as to merge the Universities of Louisville and Kentucky into one school.

Shepherd’s ruling grants a hold on the board restructuring that Attorney General Andy Beshear requested in a suit challenging Bevin’s order. Yetter says state law contains a very specific process for removing public university board members, which includes the right to a hearing before the Council on Postsecondary Education. Shepherd said that upending that process could create accreditation problems for U of L, according to Yetter.

Adam Beam of the Associated Press says Shepherd used his ruling to call out Bevin for, in effect, injecting himself into the removal of Ramsey and putting the university’s independence and academic reputation at risk. Beam notes that Bevin has been sued three times for recent efforts to restructure state boards. So far, courts have ruled against Bevin in the U of L action and his move to reorganize the Kentucky Workers’ Compensation Nominating Commission board. Beam says a ruling is expected soon in a suit challenging Bevin’s changes to the Kentucky Retirement Systems governing board.

The Bevin administration plans to appeal Judge Shepherd’s temporary hold on the U of L reorganization. Yetter says the governor’s office issued a statement strongly criticizing Shepherd for misapplying a law they argue the judge doesn’t even understand. Beam says Bevin has also argued that the old U of L board wasn’t legal because it didn’t have the proper political and racial composition mandated by state law.

The old U of L board is expected to reconvene as early as this week. Yetter notes that Shepherd did uphold the termination agreement with Ramsey since that occurred before the judge issued his injunction against the new board. She says the school has appointed an interim president and will start a search for a new chief executive.

Election Updates
Kentucky Secretary of State Alison Lundergan Grimes spoke at the Democratic National Convention on Tuesday. Adam Beam says Grimes used her time to portray a softer, more human side of Democratic presidential nominee and former Secretary of State Hillary Clinton. He says Grimes, who has been a Clinton family friend for years, told stories about Sec. Clinton’s love of buffalo wings and how Clinton called Grimes when her grandmothers died.

Despite giving a strong endorsement to Clinton, Beam says Grimes did not pledge to vote for the Democrat. Republicans criticized Grimes during her 2014 U.S. Senate bid for refusing to say whether she voted for President Obama in the 2008 and 2012 elections.

Paul is spending the Congressional recess by conducting town hall meetings across the state. Beam says the Republican continues to hit his main themes of controlling the federal debt and reigning in government spending. Beam adds that Paul has called out Gray for being a friend of Sec. Clinton, who said she would put miners and mining companies out of business during a discussion about how she wanted to help coal communities.

And it’s not too early to look to the 2020 campaign. Host Bill Bryant of WKYT-TV in Lexington says Sen. Mitch McConnell is already eying a re-election bid that year that could give the Republican a seventh term in Washington. Bryant reports that the Senate Majority Leader says he’s at the top of his game and doesn’t plan an end to his political career any time soon.

Officials on Alert for Powerful New Drug
Miranda Combs of WKYT says addicts in Ohio are abusing a powerful new narcotic referred to as “elephant heroin.” Carfentanil has that name because it’s used as a veterinary sedative for elephants, hippopotamuses, and other massive animals. Combs says it’s 100 times stronger than the painkiller Fentanyl, which has already been blamed for overdose deaths in the commonwealth. Some drug dealers mix Fentanyl, which is 50 to 100 times stronger than morphine, with heroin to boost the high addicts can get.

Combs says it’s uncertain whether Carfentanil is being abused in Kentucky because state medical examiners don’t yet have the proper test to check for it. She says officials are worried that several recent overdose cases in Boyle County may be linked to the narcotic.

Given the lack of treatment options for those with substance abuse issues, local law enforcement agencies are developing special jails that include built-in treatment centers. Combs says Knox and Madison Counties are building such hybrid facilities. She adds that Pulaski County has implemented a self-funded recovery program for addicts incarcerated there. Meanwhile, police across the state are trying to keep illicit drugs out of their jails. Combs says the jailers she’s spoken to believe they can’t prevent all drugs from being smuggled into lockups, but they hope they can at least suppress the problem.

A recent Kids Count report from the Annie E. Casey Foundation found that Kentucky leads the nation in the percentage of children who have parents in jail. Combs says Rowan County Attorney Cecil Watkins believes that the vast majority of those kids are removed from their homes because the parents have a drug addiction.

That level of incarceration is placing a significant burden on the state’s foster care system and on grandparents who are given custody of some of those children. Deborah Yetter says the state used to provide a stipend to family members providing so-called kinship care, but that money has been frozen since 2013 due to budget issues. She says the Cabinet for Health and Family Services is exploring ways to restore the funding to help grandparents and other relatives bear the costs associated with raising a child. 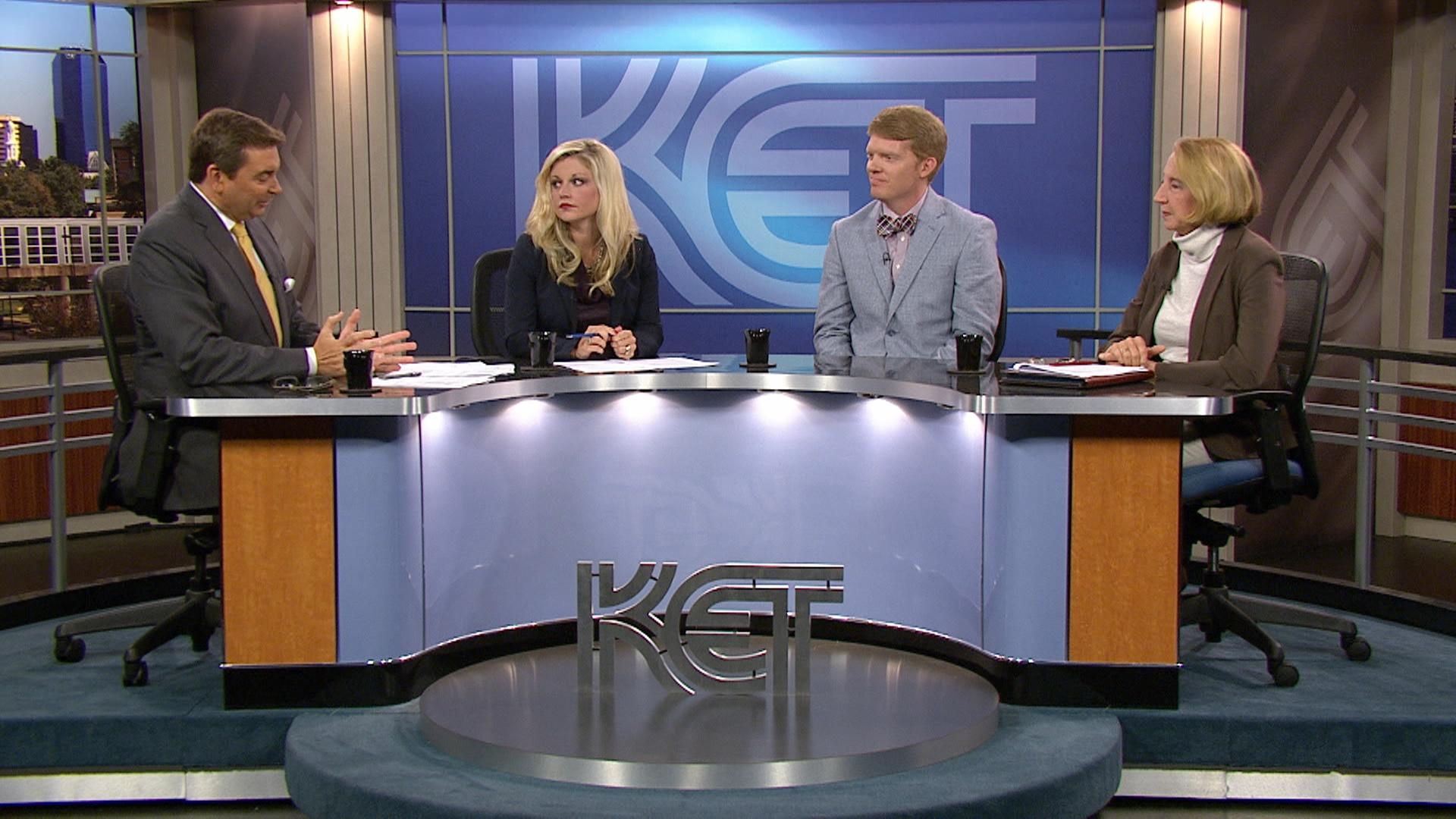