There’s an old adage among Kentucky politicians that says a good performance by a candidate at Fancy Farm won’t win him or her an election, but a bad performance will probably lose it for them.

That puts a fair amount of pressure on the 14 contenders for statewide office who will speak at the annual Graves County political picnic later today.

In a live broadcast from the Fancy Farm pavilion, the journalists on Comment on Kentucky offered their analyses of what to expect from this year’s event. Here are five takeaways from their conversation.

Ronnie Ellis of CNHI News Service says Conway supporters should be concerned that their candidate isn’t polling better since he’s been Attorney General for seven years, has run three statewide campaigns, and has already aired political ads across the commonwealth.

A deeper look at the poll numbers reveals more troubling news for Conway, according to Sam Youngman of the Lexington Herald-Leader. About 15 percent of people who say they favor the Democrat consider themselves to be “very conservative.” Youngman says it will be difficult for Conway to hold on to those voters as the campaign progresses.

On the GOP side, Youngman says the poll results indicate that Bevin still has work to do to introduce himself to voters and to unite Republicans around his candidacy. Bevin holds substantial leads over Conway in the 1st and 2nd Congressional districts, but only holds a slim lead in the 4th Congressional district. Joe Gerth of the Louisville Courier-Journal says that’s surprising since the northern Kentucky district with its significant Tea Party contingent helped Bevin win the GOP primary.

Gerth reports that Conway has a 30-point lead in the 3rd Congressional district in Louisville, and small leads in the 5th and 6th Districts. Youngman attributes Conway’s good showing in southeastern Kentucky to the Democrat’s efforts to distance himself from President Obama’s policies on coal.

2. A Wildcard in the Crowd
Independent gubernatorial candidate Drew Curtis won’t be speaking at Fancy Farm (he’s technically not on the ballot yet), but he will be at the picnic grounds promoting his candidacy. The Lexington native and digital entrepreneur is founder of an online news aggregator, Fark.com. His running mate is his wife, Heather. The couple are expected to secure enough signatures to qualify them to be placed on the November ballot.

When Curtis is added to the gubernatorial mix in the Bluegrass Poll, the independent draws 8 percent, while Conway gets 43 percent, and Bevin has 38 percent. Joe Gerth says people aren’t really supporting Curtis as much as they are saying they oppose the other candidates. Sam Youngman says Democrats fear Curtis could be a spoiler for Conway, costing him the governor’s race much like Ralph Nader did to Democrat Al Gore in the 2000 presidential election.

3. Elder Statesmen Bring the Heat
Expect to hear some fiery rhetoric from Gov. Steve Beshear and U.S. Sen. Mitch McConnell, even though neither man is on the ballot this year.

Beshear, who completes his second and final term as governor in December, has a 51 percent approval rating, according to the Bluegrass Poll. Joe Gerth and Sam Youngman say Beshear has a vested interested in pushing Jack Conway to victory as a way to ensure his own political legacy, and to help other Democrats win the down ballot races. One of those contests, the attorney general’s race, just happens to include the governor’s son, Andy Beshear. Youngman isn’t certain if Beshear’s strong approval rating is enough to generate political coattails, but he says that’s better than if the party had a scandal-ridden governor leaving office.

As for McConnell, Ronnie Ellis says the Republican tends to give flat speeches at Fancy Farm when he’s up for reelection. But when he’s not on the ballot, Ellis says the senior Senator goes into full attack mode on Democratic candidates. While generally considered a master political tactician, Ellis says McConnell has made a few strategic errors over the years. For example, in the 2010 race to replace Sen. Jim Bunning, McConnell backed then-Secretary of State Trey Grayson and failed to see the Tea Party wave that would eventually sweep Rand Paul to victory.

4. A Notable Absence
Speaking of Kentucky’s junior senator, he will not grace the Graves County picnic grounds this year. Instead Paul will be in New Hampshire trying to boost his presidential aspirations. Paul’s decision to skip Fancy Farm raised eyebrows among his fellow Republicans, especially since the Bowling Green ophthalmologist will also seek reelection to his Senate seat next year.

State Rep. Mike Harmon is likely one of those people displeased with Paul, according to Ellis. Harmon is the Republican nominee for state auditor, and he entered that race at the urging of Jesse Benton, who managed Rand Paul’s 2010 Senate campaign. Ellis says Benton wanted Harmon to sully incumbent Democrat Adam Edelen in case Edelen decides to run against Paul for Senate in 2016.

Joe Gerth reports that Fancy Farm emcee Matt Jones has already chided Paul for snubbing the picnic by saying the senator won’t be in Kentucky because he’s too busy losing his presidential campaign. Sam Youngman says Kentuckians generally don’t like being a stepladder to someone’s higher ambitions, but he says they’d probably give Paul some slack if he were doing better in the GOP primary polls.

5. Is James Comer Up To Something?
Finally Gerth says he’s yet to discover who registered the website domain comerforcongress.com. He says many people have speculated about the future political aspirations of the state Agriculture Commissioner who earlier this year lost the GOP nomination for governor by 38 votes.

Some have said Comer would run to succeed Congressman Ed Whitfield in the 1st district of western and southern Kentucky. Comer did especially well in those counties during his gubernatorial campaign. So could this be an indication of Comer’s plans for 2016?

Youngman says Whitfield’s office states the Congressman is “100 percent” running for reelection. “But I’ve learned that’s what everybody says right up to the point that they don’t,” says Youngman.

Both Comer and Whitfield are scheduled to speak today at Fancy Farm.

KET’s live coverage of all the political speeches begins at 2:30 p.m. It will also stream live at KET.org/fancyfarm. 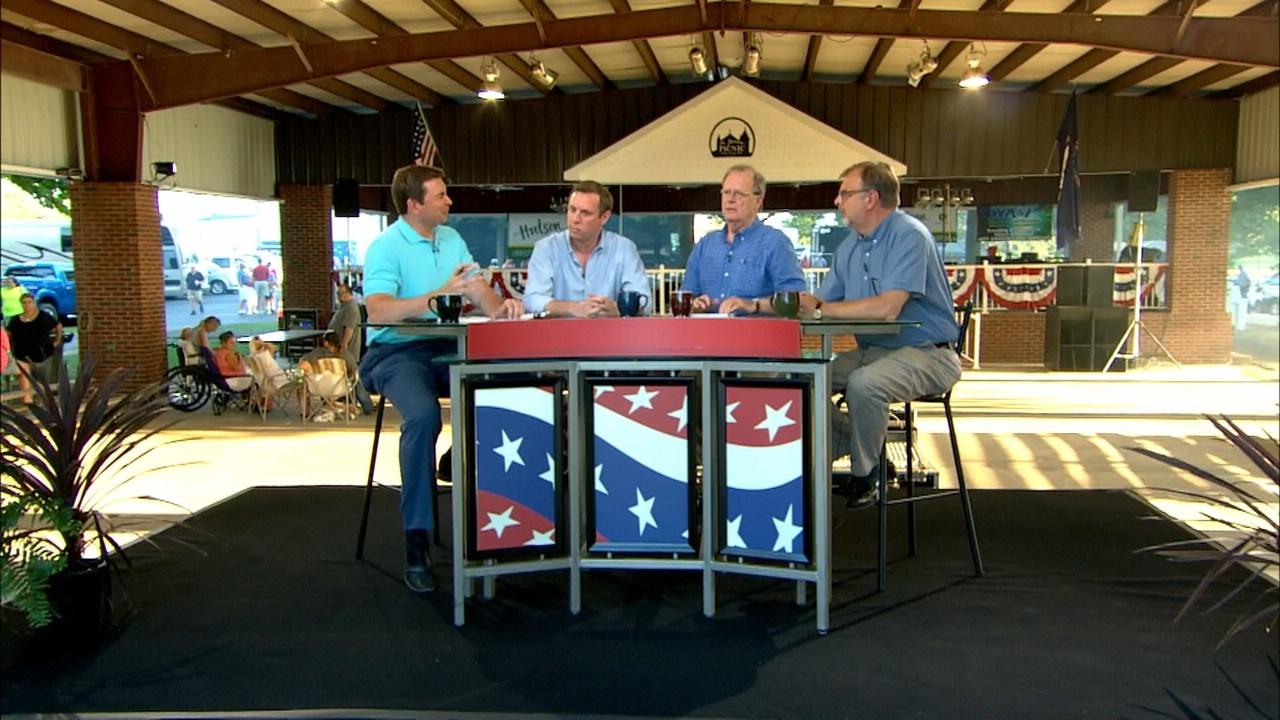