Taking another step towards honoring one of his key campaign promises, Gov. Matt Bevin last week revealed the details of his plan to overhaul Kentucky’s Medicaid system. The governor contends the expanded Medicaid program enacted by former Gov. Steve Beshear is not sustainable, so the Bevin administration is seeking permission from the federal government to restructure the state’s implementation of the system.

The journalists on KET’s Comment on Kentucky discussed Bevin’s proposal as well as the drug abuse epidemic and the ongoing legal battle over the restructuring of state boards.

Details of Proposed Medicaid Changes
Gov. Bevin’s Medicaid proposal includes removing co-pays but charging premiums of $1 to $15 a month for enrollees whose income is between 25 percent and 138 percent of the federal poverty level.

Ronnie Ellis of CNHI News Service says those who fail to pay the premiums could be “locked out” of coverage. He says the governor’s proposal also eliminates dental and vision coverage, but creates a system whereby enrollees can purchase those plans with credits they earn through certain activities like completing a financial literacy class or volunteering for community service. Ellis reports that Bevin’s goals for the overhaul are to move more people to private health insurance, improve health outcomes, and restore people’s dignity by getting them more involved in their health care.

Some of the changes that Bevin proposed met with favorable response from health care advocates, according to Ellis. He says Bevin kept important provisions for women and children as well as those with mental health or substance abuse issues. But Ellis says the advocates are concerned about how the premiums and other requirements might erect barriers to coverage for some low-income individuals.

After a 30-day public comment period, Bevin’s Medicaid team will draft a final proposal to present to the federal Centers for Medicaid and Medicare (CMS) and U.S. Department of Health and Human Services. Ellis says some of the changes Bevin has proposed haven’t been approved by CMS in other waiver applications so it’s uncertain how they would view the Kentucky plan.

If CMS rejects Bevin’s proposal, the governor said he would end the expanded Medicaid coverage that Gov. Beshear put in place in 2013. If that happens, Ellis says, 425,000 Kentuckians could lose their insurance coverage.

If Bevin’s plan is approved, Lawrence Smith of WDRB-TV in Louisville says the governor has set the ambitious goal of getting the new Medicaid system in place by this time next year.

The health care reforms that Gov. Beshear implemented have resulted in a significant drop in the rate of uninsured individuals in the commonwealth from 20 percent to less than 8 percent. Laura Ungar of the Courier-Journal says thousands of people got much-needed care, which people in Tennessee and other states that didn’t expand Medicaid have been unable to get. She says Kentucky’s expansion also dramatically improved cancer screening rates for those on Medicaid.

The Sweeping Toll of Drug Addiction
A new report from the Kentucky Office of Drug Control Policy shows that overdose deaths rose from 1,071 in 2014 to 1,248 in 2015. Heroin use accounts for about 28 percent of those deaths.

The drug scourge exacts a unique toll on children in the state, according to Laura Ungar. She says the number of children living in foster care or other out-of-home care has increased to more than 8,000. She adds that grandparents and other family members are frequently pressed into service to raise children as young as infants because of a substance use problem with one or both parents. Ungar recounts a story told by one Jefferson Family Court Judge who sent police to pick up the babies of a drug-addicted parent only to find those children wandering the street in their diapers.

The lack of treatment options continues to be an issue. Ungar says there are waiting lists for many of the state’s treatment centers. She says it’s important for users to be able to access treatment at the point they’re ready to commit to a program, otherwise they’re at risk of further drug use and a possible overdose.

The drug problem is also taxing the state’s courts, jails, and prisons. Last week Gov. Bevin announced the formation of a special panel to review Kentucky’s criminal justice policies and recommend changes to the system. Lawrence Smith says the governor wants the panel to examine the “patchwork” of laws currently in place and provide options for sentencing reform and ways to reduce recidivism by offering more help to individuals after they leave jail.

Board Reorganizations Challenged
Attorney General Andy Beshear has intervened in a lawsuit challenging Gov. Bevin’s plan to dismantle of the Kentucky Retirement Systems (KRS) board. In the process Beshear is also protesting Bevin’s reorganization of the University of Louisville Board of Trustees.

On June 17, Bevin said he was abolishing the current 17-member board at U of L, and would replace it with a 10-member board. That same day Bevin announced that he was also replacing the board of trustees that oversees the state pension plans with a larger board of directors.

Lawrence Smith says Bevin’s action at U of L has left the university in limbo since the previous board had not yet decided on a proposed tuition hike or approved a budget for the new fiscal year that starts July 1. Smith says U of L President James Ramsey, who agreed to step down as part of the reorganization, is proceeding with a temporary budget that includes a 5 percent increase in tuition.

Smith says there’s a question whether the three-person interim board can approve a new spending plan for the school. He says there’s also uncertainty about when Ramsey would actually leave his post. Smith says Ramsey told reporters it could be weeks or months before he steps down as president of the school. Ramsey is also president of the university’s foundation, which paid him more than $2.5 million in 2014.

Smith says Bevin cited a decision by former Attorney General Jack Conway that seems to support the governor’s authority to reorganize state boards. Ronnie Ellis says that language was actually a footnote in another case and stipulated that a legislative committee of proper jurisdiction would have to give prior approval to a board restructuring.

Ellis says that before the KRS or U of L cases can be addressed, Franklin County Circuit Judge Phillip Shepherd must first rule on Beshear’s motion to join the two legal actions. 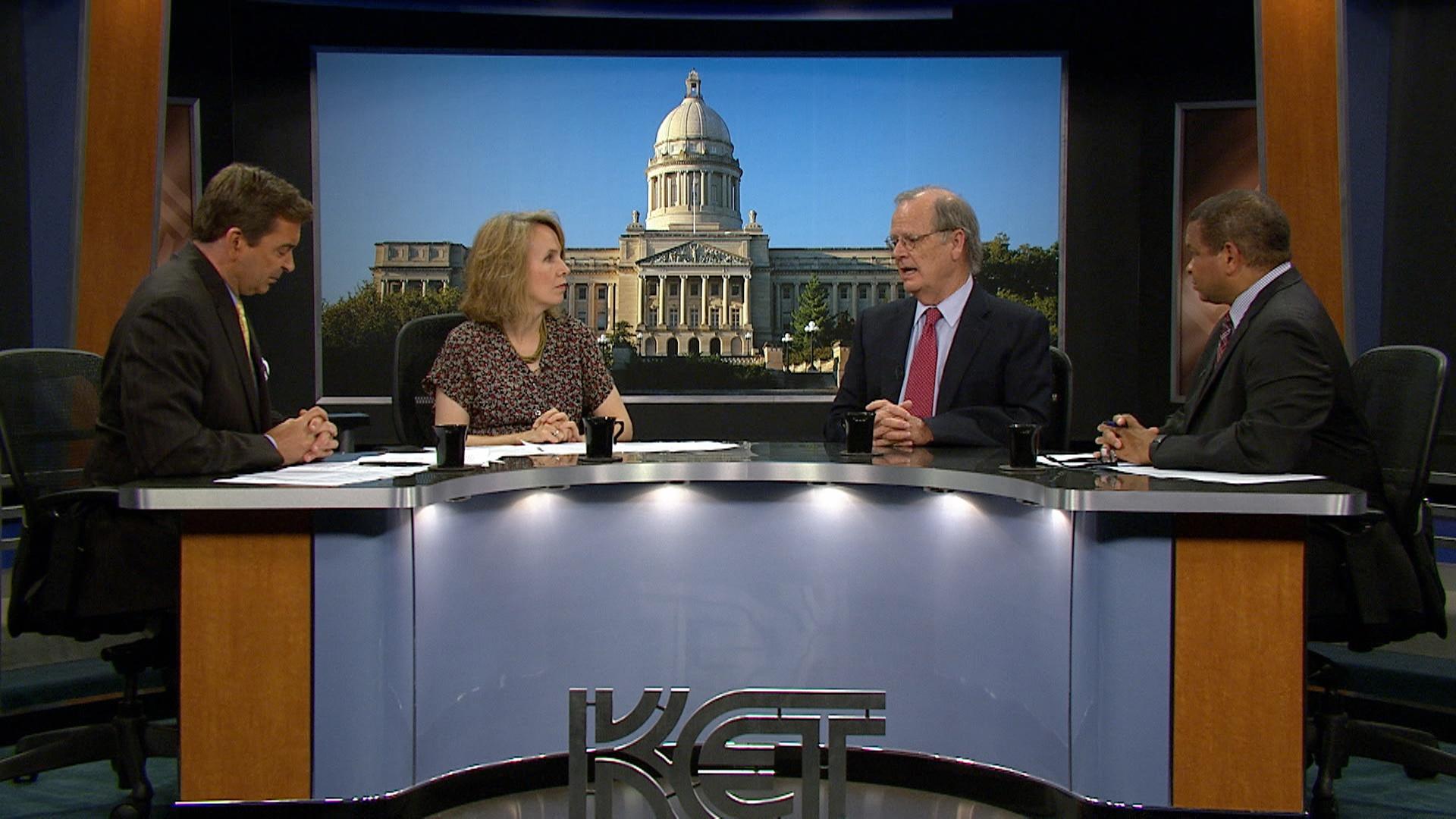