Journalists from around the state discuss news of the week with host Bill Bryant, including the release of an audit into the University of Louisville Foundation. Guests: Linda Blackford, enterprise reporter, Lexington Herald-Leader; Scott Wartman, reporter, The Kentucky Enquirer; and Kevin Wheatley, reporter, Pure Politics on Spectrum News.
S43 E30 Length 26:33 Premiere: 6.9.17

A federal judge strikes down state ethics rules designed limit gifts and campaign donations from lobbyists to lawmakers. Meanwhile the University of Louisville is sorting through a scathing audit of its foundation.

The journalists on KET’s Comment on Kentucky discussed those stories as well as other news from Frankfort and around the commonwealth.

State Sen. John Schickel (R-Union) brought the suit challenging the limits. Scott Wartman of the Kentucky Enquirer said Schickel has often chaffed at the regulations and is overjoyed by the ruling. He says Schickel has argued that the existing rules prevented a lawmaker from taking a glass of water from a lobbyist.

The regulations have been in place since 1992 following an FBI investigation called BOPTROT. It found that 15 state legislators, including then-House Speaker Don Blandford, had sold their votes. Wheatley says that unless Bertelsman’s decision is appealed, lobbyists will be able to open their wallets to lawmakers in the commonwealth. Kentucky Attorney General Andy Beshear said the ruling is “very concerning” and wants to see if his office has standing to intervene in the case.

Wheatley says some states have ethics rules that prohibit campaign contributions to lawmakers during legislative sessions. He says the state legislative ethics commission could consider rewriting Kentucky’s rules with that more specific parameter.

Foundation Receives Scathing Audit
The new board chair of the University of Louisville Foundation says an audit of the organization’s finances under previous President James Ramsey paints a “disturbing picture” of financial mismanagement. The foundation ordered the review following the resignation last year of Ramsey, who headed both the non-profit foundation and the University of Louisville.

Wheatley says the audit found a number of problems, including $42 million in endowment funds that were liquidated to cover over-budgeted expenses; a $21.8 million deferred compensation plan that was never budgeted; and big-ticket expenses that were improperly documented and debated by the board. Ramsey was also able to violate spending limits without ramifications, says Wheatley.

Auditors were unable to find all the records they needed for the review. Wheatley says they also discovered that Ramsey’s computer hard drive had been scrubbed clean. He says the audit revealed a board that didn’t know what it was doing.

The new administration of the board will meet next week to discuss next steps for correcting issues detailed in the audit and to consider the possibility of criminal charges relating to the financial improprieties.

Special Session Update
Gov. Matt Bevin said he expects to call a special legislative session on tax and public pension reforms after Aug. 15. He also said he wants lawmakers to provide their suggestions for a tax overhaul by mid-July.

One idea under consideration would apply the state sales tax to food and prescription medicines. Linda Blackford of the Lexington Herald-Leader says that would be an extremely risky proposition for lawmakers to make even though that exemption represents billions of dollars in lost tax revenues for the state. Blackford says another option would be to tax professional services, but she says attorneys and accountants would fight such a move.

Income tax cuts haven’t always worked for states that have proposed them. Blackford says lawmakers in Kansas had to reverse massive tax breaks enacted there because the state faced mounting deficits and cuts to education and public services. She says supply-side economist Art Laffer, who helped devise the Kansas plan, has been in Kentucky lately and may be peddling a similar type of tax strategy to Gov. Matt Bevin. Blackford says what happened in Kansas should be a cautionary tale for lawmakers here.

Northern Kentucky News
During the presidential campaign last year, Donald Trump pledged to pay for a new bridge between northern Kentucky and Ohio. But during an appearance in Cincinnati last week, President Trump never mentioned replacing the Brent Spence Bridge. Wartman says the president staged his press event on the Ohio River waterfront at a location where the aging bridge would not be visible.

After years of debate about a replacement bridge, some local civic leaders are uncertain about a new crossing. Wartman says Covington Mayor Joe Meyer questioned the need for a new bridge when he campaigned for office last year. Now the former state legislator says something must be done about replacing the Brent Spence span, but he fears current plans would take too many downtown properties and hurt Covington’s business district, according to Wartman.

Federal officials announced the closure of an IRS facility that will cost Covington 1,800 jobs. Wartman says the center that processes mailed income tax returns has been in operation since the early 1960s. He says some administrative employees will remain in Covington, but the other jobs will be eliminated by 2019.

Meanwhile some officials in Grant County are disappointed by lower than expected tourism revenues from the nearby Ark Encounter park. Wartman says the replica of Noah’s Ark is reportedly drawing large crowds, but he says those tourists aren’t visiting the county seat of Williamstown to spend money.

Blackford says Grant County Judge-Executive Stephen Wood calls the tax incentives the park received a “30-year giveaway.” She says the park is exempt from 75 percent of its property taxes for 30 years. She says local residents are disappointed that the park hasn’t delivered on the tourism and economic benefits it promised the county.

Education Updates
Students at several of the commonwealth’s colleges and universities will face more tuition increases this fall. Blackford says tuition for in-state students at the University of Kentucky will increase 4 percent, while out-of-state students will pay an additional 6.5 percent. At Morehead State University, tuition is set to go up by nearly 5 percent, and at Kentucky Community and Technical College campuses, students will pay an additional $6 per credit hour.

In an effort to save money, Eastern Kentucky University is privatizing its campus maintenance and custodial functions. Blackford says although EKU will pay Aramark about $7 million a year for those services, the school will see a net savings of $5 million. The transition will cut 180 jobs from the EKU payroll.

Attorney General Andy Beshear is once again threatening to sue Gov. Bevin over his actions to restructure state boards. Wheatley says an executive order issued by the governor last week created a new Charter Schools Advisory Council; it also dissolved and reconstituted several other boards, including the Educational Professional Standards Board. Beshear contends the law cited by the Bevin administration in the reorganization doesn’t apply to the boards in question. He gave the governor seven days to rescind the order.

Bevin’s office says the action is legal, and called Beshear a hypocrite for contesting the restructuring, according to Wheatley. He says this is another round in the Bevin-Beshear feud that’s likely to wind up in court. 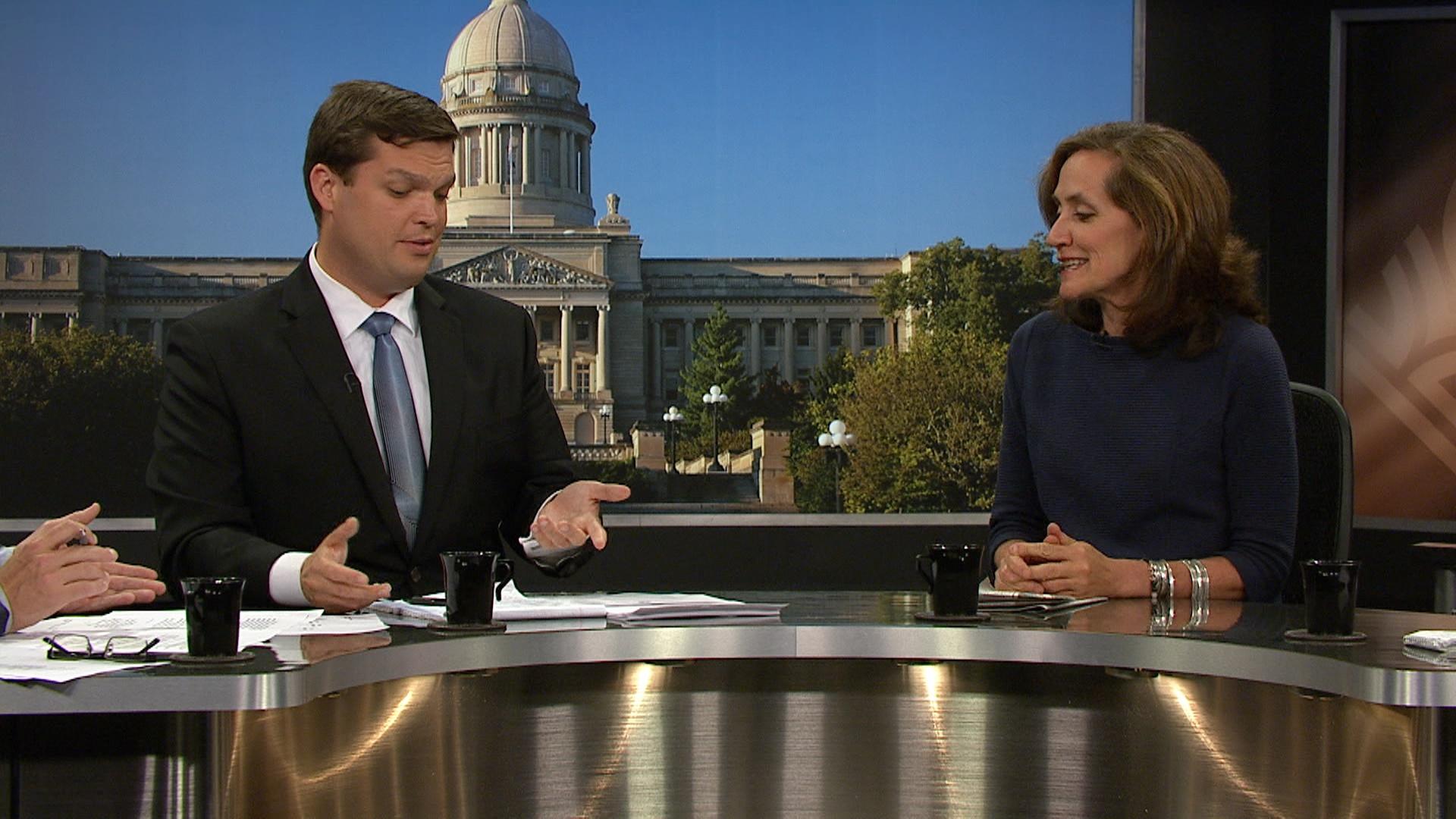