Host Bill Bryant and guest journalists discuss the results of the March 5 Republican caucus and the March 8 special elections for open House seats, among other topics. Guests: Jack Brammer of the Lexington Herald-Leader; Lawrence Smith of WDRB-TV in Louisville; and Nick Storm of cn|2.
S42 E19 Length 26:31 Premiere: 3.11.16

If the Republican Party of Kentucky had hoped the March 5 presidential caucus would help build enthusiasm and turnout for the special state House elections three days later, they may have been disappointed.

The journalists on Comment on Kentucky analyzed those contests and what they may mean for the rest of the legislative session and the fall elections.

Final Thoughts on the Presidential Caucus
The 18 percent of eligible Republicans who turned out for the caucus faced big crowds and even some traffic problems in several counties. Lawrence Smith of WDRB-TV in Louisville attributes those problems to voters having fewer polling locations and shorter hours in which to cast their ballots. Turnout could have been greater, but Smith says the tight budget for the caucuses didn’t include advertising to promote the event, and he says the candidates only purchased a few radio spots and no television time in the state.

Kentucky was the last race called on that Super Saturday of voting, giving the state some prominence in the Republican nominating process. Nick Storm of cn|2 says Donald Trump’s victory here and his continued success around the nation puts Sen. Mitch McConnell in a difficult spot. Storm says a divisive presidential nominee like Trump could make it harder for McConnell to secure key Senate wins this fall that would help him remain Majority Leader.  Storm adds that McConnell opposes doing another caucus in 2020.

Although few high-profile Republicans in the commonwealth endorsed a particular candidate, Storm says many in the state’s GOP establishment generally favored Florida Sen. Marco Rubio, who placed a distant third in Kentucky’s caucus.

Special House Elections Set Up Fall Contests
Storm wonders if the long lines at many polling locations may have dampened Republican turnout for the special elections to fill four open state House seats on March 8. Democrats won three of those contests, leaving Republicans to win the one district where the GOP has a majority of registered voters.

The results give Democrats a 53 to 47 majority in the House. Jack Brammer of the Lexington Herald-Leader says that gives Democratic leadership the votes they need to pass their version of the state budget, and to defeat Republican efforts on right to work legislation, charter schools, and other issues. Each of the candidates in the four races are running again in November, and Brammer says several of them even face primary challengers in May.

Although state Democrats have run away from President Obama, the Democrat in the 8th district House race actually used a robocall from Obama to help secure his victory. Nick Storm says retired TVA executive Jeffrey Taylor paired the robocall with an extensive ground game to help boost turnout among minority voters in the southwestern Kentucky district. Brammer says that strategy may hurt the Democrat in the fall, though, since Republicans will likely use the unfavorable president to attack Taylor.

Gov. Matt Bevin campaigned for the Republican candidates in the four races, but Storm says the governor’s presence may have backfired. Storm says that polling shows Bevin has unfavorable ratings given his austere state budget proposal. Storm says a robocall and radio ads in the 62nd House district race around Georgetown specifically criticized Bevin’s cuts to education.

House Budget Expected
The journalists say Bevin also stumbled with a Facebook video meant to mock House Democrats. The video, released last Monday, showed Bevin walking into an empty House chamber and asking why representatives weren’t working on the state budget. Lawrence Smith says the governor made the video at a time when neither chamber was in session, and House members were working in budget committees in the capitol Annex.

Storm says Democratic leaders responded by saying Bevin was either purposefully misleading Kentuckians or that he’s ignorant of how Frankfort works. They took to social media with their own response posts and a Twitter hashtag, #bevinsolost, which Storm says trended nationally for several days.

House leadership is expected to release their budget this week, and the full body could vote on it as early as Tuesday afternoon (after the four new representatives are sworn in). Jack Brammer says the spending plan will restore higher education funding, but he’s uncertain exactly how much House Democrats will allocate and where they will find that money. He says Senate Republicans and Gov. Bevin will oppose any budget that includes bonding to prop up the state’s ailing teacher pension system.

Brammer adds that Senate Republicans are also concerned about education funding. The proposed budget reductions to the state’s public universities and colleges have prompted Morehead State University officials to schedule a five-day unpaid furlough for faculty and staff.

Storm says Senate Republicans have pledged to maintain their legislative independence from the governor as they build their budget. But with fewer than 15 working days left in the session, Storm wonders whether lawmakers can get a compromise budget to Bevin before the governor’s veto period. If they can’t, Storm says Bevin may be able to do what he wants with the final spending plan.

Other Legislative Updates
The state Senate heard emotional testimony last week about legislation that calls for police to collect DNA samples from those arrested on felony charges. The sample would go into an FBI database to check for matches against other crimes.

Lawrence Smith says the ACLU opposes Senate Bill 150 on constitutional grounds that it’s an invasion of privacy to collect DNA before someone is convicted of a felony. He says Sen. Perry Clark (D-Louisville) used colorful language to express his opposition to the bill.

Sen. Dan Seum (R-Fairdale) claimed the legislation would violate the Fifth Amendment to the Constitution, and said it was another example of government overreach. Nick Storm says those comments brought one rape survivor who testified on behalf of SB 150 to tears. Storm says the bill cleared the Senate Judiciary Committee on a narrow margin and now heads to the Senate floor.

The chamber’s education panel cleared legislation calling for pilot charter schools in Fayette and Jefferson County. If the bill passes the full Senate, as is expected, Storm says it’s unlikely that House Democrats will take up the measure.

And Smith says the House passed a bill that would allow retired and off-duty police officers to carry a concealed deadly weapon almost anywhere. Smith says that the Louisville Metro Police Department requires their officers to always carry their sidearms, but some public venues ban concealed weapons. The legislation that now advances to the Senate would override those venue-specific restrictions. 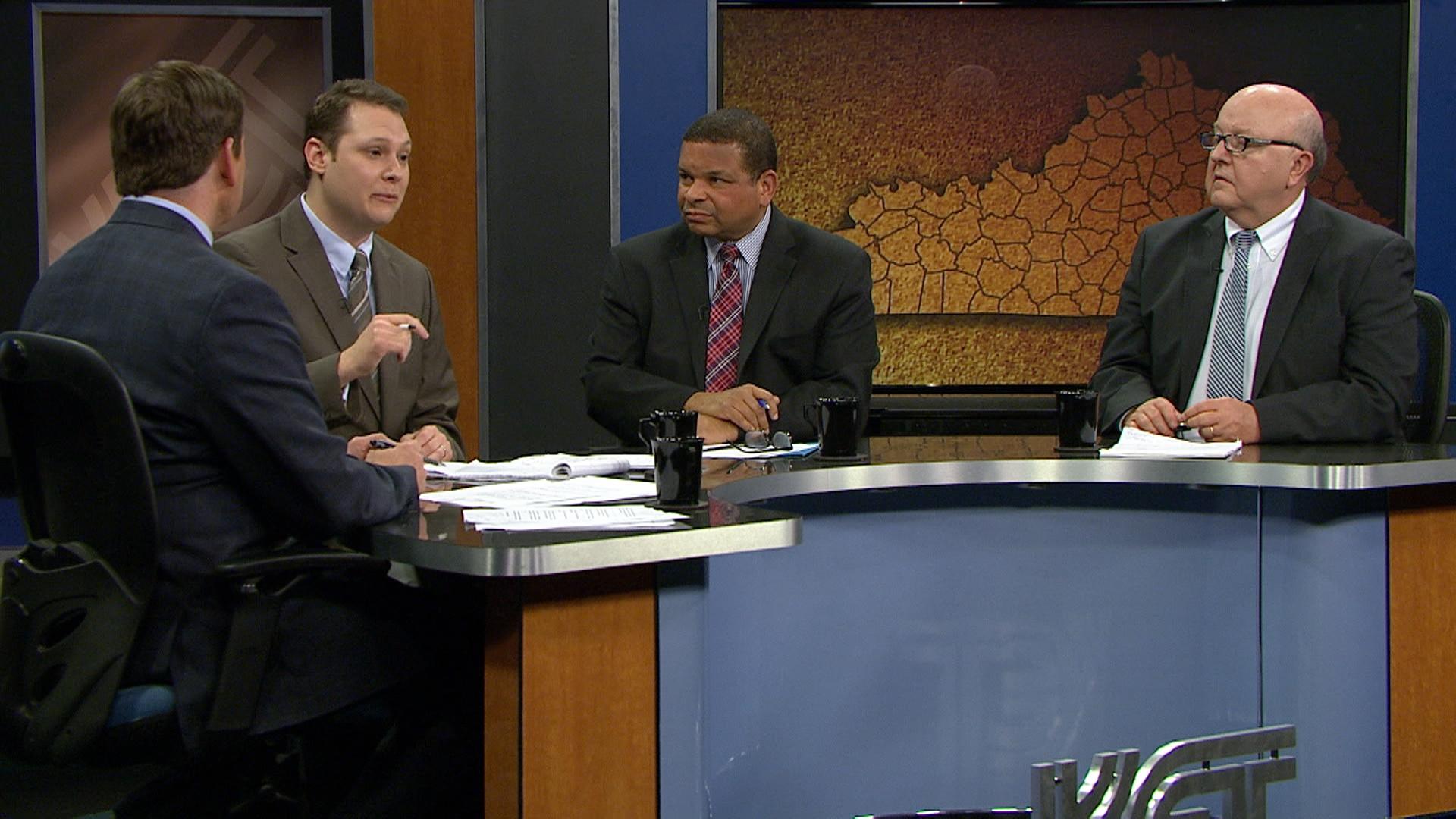