McConnell Going to War Over Coal

Speaking on Comment on Kentucky, James Carroll of the Louisville Courier-Journal describes McConnell as “jaunty” following Thursday’s vote. He says one of the senator’s top priorities is to go to war with President Obama over the administration’s anti-coal regulations. Carroll expects the new Republican-controlled Congress to use the appropriations process to cut Environmental Protection Agency funding, or to restrict how the agency can use its budget.

Meanwhile, Kentucky’s junior senator, Rand Paul, held a summit at a Washington hotel to explore his potential presidential bid. Carroll says all indications are that Paul will enter the 2016 race. The campaign would have headquarters in Louisville and in California’s Silicon Valley.

In Kentucky’s House delegation, Carroll says the ethics investigation of 1st District Congressman Ed Whitfield will advance. The Hopkinsville Republican is accused of improper use of his office to help his wife lobby on behalf of the Humane Society Legislative Fund. Carroll says an independent nonpartisan review board found substantial reason to believe that Whitfield had violated ethics rules. The congressman denies any wrongdoing but the House Ethics Committee will continue the investigation.

Politics Back in Kentucky
As state legislators prepare for the 2015 General Assembly session, both parties have leadership positions up for grabs. Long-time House Speaker Pro Tem Larry Clark (D-Louisville) announced last week he will step down from the post he’s held since 1993.

Michael Gossum of WBKO-TV in Bowling Green says Rep. Dennis Keene (D-Wilder) and Rep. Jody Richards (D-Bowling Green) may vie to replace Clark. Gossum says House Democrats must decided whether to install a fresh face in the Speaker Pro Tem position, or elect a more experienced lawmaker like Richards, who has been in office since the 1970s and was Kentucky’s longest serving House Speaker.

After the GOP failed to take the state House, Gossum says he’ll be interested to see if there are any changes in Republican leadership in the chamber. He reports that U.S. Sen. McConnell has pledged to raise money to help Republicans win control of the Kentucky House in 2016.

It was a quiet week for the gubernatorial candidates. Republican Hal Heiner made Doug Alexander his campaign communications director. Alexander served as press secretary to former Gov. Wallace Wilkinson.

On the Democratic side, Adam Beam of the Associated Press says the state Executive Branch Ethics Commission cleared Jack Conway to use a state-funded security detail to accompany him on campaign events. This comes after threats were made to the state Attorney General and his family.

Economic News
John Stamper of the Lexington Herald-Leader says state budget officials were pleasantly surprised by higher than expected tax receipts for October. But he warns that revenues must continue to grow almost 4 percent a month for the rest of the fiscal year to avert a budget shortfall.

After seeing a slight uptick earlier this year, eastern Kentucky coal production and employment dropped in the third quarter. Stamper reports there are now only 7,200 mining jobs in the region, compared to 14,000 jobs six years ago. Stamper says all estimates show a continued decline for the industry there.

In an effort to further diversify the state economy, Gov. Steve Beshear left Saturday on an economic development mission to Japan and Taiwan. Adam Beam says cultivating relationships in Asia has been good for the commonwealth. Beam reports that since Toyota came to Georgetown in 1986, an additional 160 Japanese companies have located in the state. Those businesses employ some 43,000 people, or about 3 percent of Kentucky’s workforce, according to Beam.

Watch the full Comment on Kentucky program for more on these topics, as well as discussion about the new open enrollment period for Kynect, and Crit Luallen’s new job as lieutenant governor. 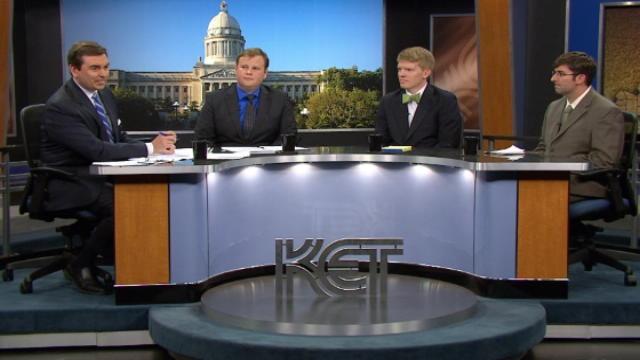