As Election Dust Settles, What’s Next?

With the elections finally over, attentions now turn to what’s next for the winners and losers in Tuesday’s voting. The panel on this weekend’s Comment on Kentucky discussed the prospects for those in Washington and in Frankfort.

In the U.S. Senate contest, Lawrence Smith of WHAS-TV says Democrat Alison Lundergan Grimes carried Metro Louisville by only 36,000 votes, and Lexington/Fayette County by fewer than 6,300 votes. He says that wasn’t nearly enough to overcome the margins that incumbent Sen. Mitch McConnell had in the rest of the state, where the Republican carried 110 of Kentucky’s 120 counties.

McConnell quickly established himself as the presumptive Senate Majority Leader with a nationally televised news conference the day after the elections. Jack Brammer of the Lexington Herald-Leader says McConnell will have his hands full managing the different GOP factions while trying to work with President Obama. He argues that the president should reactivate Vice President Joe Biden to help facilitate negotiations between the White House and McConnell.

As for Secretary of State Grimes, Nick Storm of cn|2 says he thinks she will run for governor, or may even consider being a candidate for lieutenant governor. He says Grimes would benefit from the statewide campaign organization she built, and from the high name recognition the race generated for her.

Storm contends state Democrats are indebted to Grimes for being such a strong Senate candidate that McConnell had to focus all his financial resources on her. If McConnell had a weaker opponent, Storm says the Republican leader might have used some of his campaign money to help GOP candidates in state House races.

State Legislative Races
Despite a significant push by Republicans to gain control of the Kentucky House of Representatives, Democrats held their 54 – 46 majority in that chamber. One surprising victory on the Republican side came in the 25th House District in Hardin County where newcomer Jim DuPlessis defeated veteran Rep. Jimmy Lee. Jack Brammer says Lee’s departure will be a major blow for the House, where the Democrat is known for his vast knowledge of Medicare, Medicaid, and personnel budgets.

In the Kentucky Senate, Republicans gained three seats to widen their majority to 26 – 12 in that body. Among the Democrats to lose was Senate Minority Floor Leader R. J. Palmer. Brammer says Sen. Ray Jones of Pikeville and Sen. Dennis Parrett of Elizabethtown may seek the Democratic leadership position. Nick Storm adds Sen. Morgan McGarvey of Louisville and Sen. Dorsey Ridley of Henderson to the list of potential contenders.

Political Veterans Get New Jobs
Another Frankfort shake-up made news Thursday morning when Lt. Gov. Jerry Abramson announced his resignation to become deputy assistant to President Obama as his director of intergovernmental affairs. Jack Brammer says Abramson is well suited to be the White House liaison to state and local governments given his 21-year tenure as mayor of Louisville.

Lawrence Smith says in picking Luallen, Beshear went with a safe choice to fill the job, rather than making a political choice to select someone with aspirations for the governor’s office. While there was some discussion about whether Beshear has the constitutional authority to fill the vacancy, Smith says state Republicans won’t challenge Luallen’s appointment.

–The opinions expressed on Comment on Kentucky and in this program synopsis are the responsibility of the participants and do not necessarily reflect those of KET. 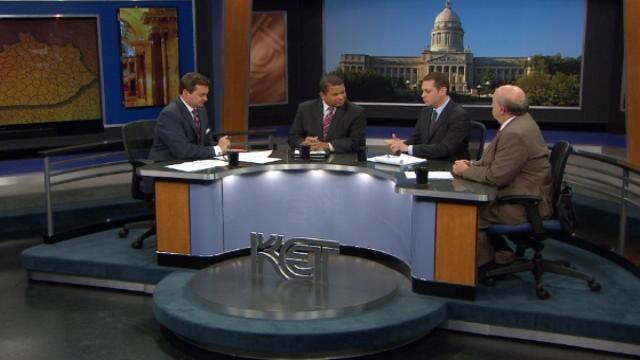