Bill Bryant and journalists discuss the week's news from the commonwealth, including a visit from EPA chief Scott Pruitt to eastern Kentucky, economic news from Louisville, and the latest on pension reform. Guests: Nick Storm from Spectrum News; Roxanne Scott from WFPL in Louisville; and Tom Loftus from the Louisville Courier-Journal.
S43 E48 Length 26:44 Premiere: 10.13.17

Last week Environmental Protection Agency Administrator Scott Pruitt returned to his native Kentucky to declare an end to the “war on coal.”

Speaking at a mining equipment company in Hazard, Pruitt said he would sign an order reversing the Obama Administration’s Clean Power Plan to limit greenhouse gas emissions. Pruitt along with President Donald Trump and mining advocates contend that plan and other environmental regulations have decimated the nation’s coal industry.

The journalists on KET’s Comment on Kentucky discussed the ramifications of Pruitt’s action. They also reviewed the president’s executive orders on health care, the latest on the state pension crisis, and economic news in Metro Louisville.

Power Plant Regulations Reversed
EPA Administrator Pruitt, who was born in Danville and raised in Lexington, appeared with U.S. Sen. Mitch McConnell (R-KY) to announce his intention to revoke the Clean Power Plan. Those regulations enacted by the Obama Administration in 2015 would cut carbon dioxide emissions from the nation’s power plants by 32 percent by 2030.

McConnell and President Trump both ran on reversing the regulations and restoring jobs to the coal industry, according to Nick Storm of Spectrum News. He says the rules have had some impact on mining but the bigger factor in coal’s decline has come from natural gas, which is cheaper to produce and emits less pollution when burned. Storm says increased mechanization in the mining industry has also contributed to the decline in coal jobs.

Although Pruitt criticized the Clean Power Plan for picking winners and losers in the energy sector, not everyone opposed the regulations. Storm says Congressman John Yarmuth (KY-3), the state’s lone Democrat in Washington, joined an amicus curiae brief on Tuesday in support of the Clean Power Plan. Yarmuth contends the rules would save lives, including 3,500 people a year who would otherwise die from pollution-related illnesses. The regulations would also reduce greenhouse gas emissions that contribute to climate change, says Storm.

Trump Health Care Actions Impact Kentuckians
On Thursday, President Trump signed an executive order on health care that includes reforms promoted by Kentucky’s U.S. Sen. Rand Paul. The Bowling Green Republican joined the president for the signing ceremony and said the plan to allow people and small businesses to band together into associations to buy health insurance is “the biggest free-market reform of health care in a generation.” Storm says the senator contends association purchases will lead to lower health insurance premiums

But it’s unclear how that would actually work. Storm says the government would have to change numerous regulations to enable that to happen. Critics also argue that the plan could result in “junk policies” that offer limited coverage for the healthiest people. Storm says the plan could hurt individuals who need higher quality health care coverage.

Paul has been critical of the president and recent Republican efforts to repeal and replace the Affordable Care Act (ACA), says Storm. Last month the junior senator came out against the Graham-Cassidy Bill because he said it did not go far enough in repealing the ACA.

The president signed a separate order on Thursday to end a key part of ACA / Obamacare: subsidy payments to health insurance companies that cover copayments and deductibles for low-income individuals. Storm says the move affects people who are between 100 and 250 percent of the federal poverty level, including thousands of Kentuckians.

Kentucky Attorney General Andy Beshear pledged to join other state attorneys general in a lawsuit against Trump’s action. Storm says Beshear contends the president doesn’t have the authority to make these changes to the subsidy payments.

State Pensions and Budget
Another week passed without the release of a state pension reform plan by the Bevin Administration and legislative leaders. Tom Loftus of The Courier-Journal says an announcement could come today. He says the negotiations are tricky because a number of factors could cause state House members, especially freshmen Republicans, to oppose the legislation.

Meanwhile Gov. Matt Bevin wants to call a special legislation session soon and pass reforms by the end of the month, says Loftus. But that would conflict with House Speaker Jeff Hoover’s promise to give lawmakers 30 days to review the proposal. That would put a special session in mid to late November.

Despite promises by Bevin to protect the benefits already promised to current state employees, many workers are filing for retirement in hopes of locking in their benefits. Loftus says the Kentucky Retirement Systems saw retirements for the month of August increase 37 percent over the same time last year. In September, they were 22 percent higher. He says 120 teachers are also slated to retire by November 1.

The Consensus Forecasting Group released its new budget projection for the current fiscal year. Loftus says the group predicts a $155 million budget shortfall for the year ending June 30. The previous forecast put the shortfall at $206 million. The projection was buoyed by a slight increase in state revenues for the month of September, says Loftus.

Metro Louisville News
Louisville hopes to land a new Amazon headquarters that could mean 50,000 new jobs and a $5 billion investment by the online retailer. Roxanne Scott of WFPL public radio says Louisville faces stiff competition from cities such as Boston, Denver, and San Diego. She says Amazon wants a city with more than a million people and superior mass transportation. Louisville Mayor Greg Fischer acknowledges that the city has room to improve its mass transit infrastructure.

Another program helps immigrants who did a specific job in their home countries get certified to do the same work in Louisville. Scott says the initiatives are designed to help fill 30,000 jobs currently open in the city.

Meanwhile the Doe-Anderson Advertising agency is among the Louisville businesses stepping up to help refugees moving to the city. Scott says agency employees will be allowed to volunteer to assist refugees on company time. 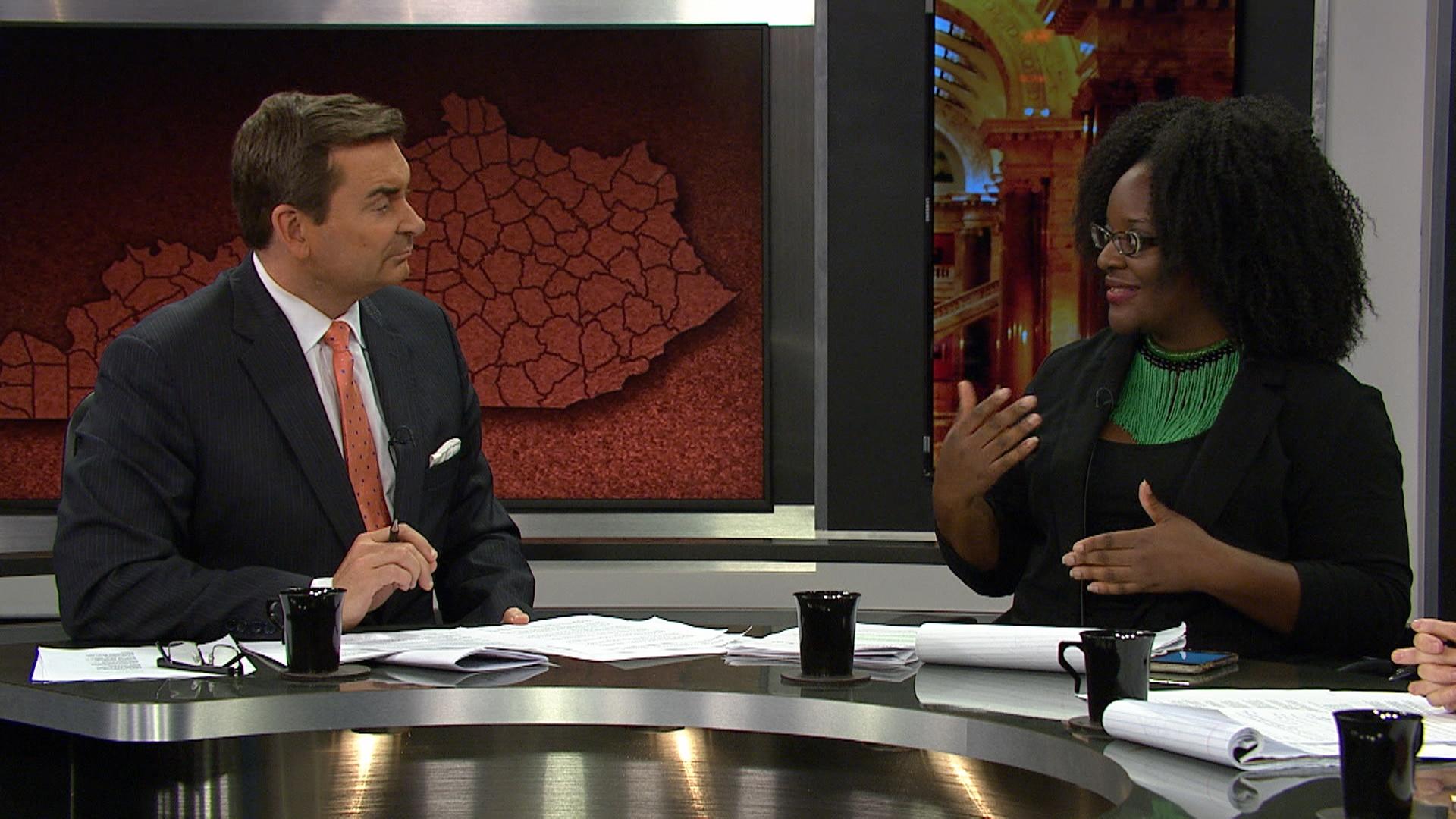