Bill Bryant and a panel of journalists discuss the week's news from the commonwealth, including the announcement by Gov. Matt Bevin and legislative leaders of a proposal to substantially overhaul Kentucky's public pension system. Guests: John Cheves from the Lexington Herald-Leader; Becca Schimmel from Ohio Valley ReSource at WKU Public Radio; and Lawrence Smith from WDRB-TV in Louisville.
S43 E49 Length 26:35 Premiere: 10.20.17

After weeks of anticipation, Gov. Matt Bevin and Republican legislative leaders released their proposal to stabilize and reform the state’s debt-laden pension systems. The plan reserves the most significant changes for future public employees and teachers who would be placed in 401(k)-type retirement plans rather than receive a traditional pension.

The journalists on KET’s Comment on Kentucky reviewed highlights of the reform framework as well as reaction to the proposal. They also discussed state tax issues, the latest in the University of Louisville basketball saga, and challenges facing children in the state.

Pension Reform Proposal Revealed
Under the Republican reform plan announced on Oct. 18, current employees and retirees will keep most of the pension benefits they’ve been promised. The retirement age for current workers will not be increased, and current retirees will experience no clawback of cost-of-living adjustments (COLAs) they have already earned. Newly hired teachers and new, non-hazardous public employees will go into new defined-contribution, 401(k)-type retirement plans.

John Cheves of the Lexington Herald-Leader says once current public employees and teachers reach retirement age or their total years of service, they can retire and take their pensions, or they can continue to work. However, if they remain on the job, their pension accounts will no longer accrue any additional earnings. Instead, the employees will be placed into the new 401(k) plan for the rest of their working careers.

The one exception is for teachers who are already eligible for retirement. Cheves says they will have the option to work and keep building their pensions for up to three additional years. He says that provision is designed to prevent a mass exodus of the 14,000 educators who could retire at the end of this school year.

The reform plan also says the state’s actuarially required contributions (ARC) to the retirements plans will be mandated by statute so lawmakers will no longer be able to short-change pension payments during lean budget years. Instead of setting the ARC as a percentage of payroll, Cheves says the state will now use what’s called level-dollar funding. Officials will determine the total pension liabilities, apply interest to that figure, and then divide the total by 30. Cheves says that will allow the state to plan for set annual payments over the next three decades. The draft legislation, once completed, will include a fiscal note that calculates the total unfunded liabilities, says Cheves.

The announcement of the reform plan did not include a delivery date for the full legislation or a schedule for conducting the special General Assembly session to consider the proposal. The bill will not include an emergency clause, so the legislation, if approved, would not go into effect until July 1, 2018.

Lawrence Smith of WDRB-TV in Louisville says reaction has followed partisan lines: Republicans generally favor it and Democrats don’t. He says teacher groups contend the COLA freezes amount to a cut in benefits. He says they also fear that offering new teachers a 401(k) plan instead of the traditional pension will make it harder to attract good educators to the classroom.

Tax Issues
A new report from The Tax Foundation, a national tax policy organization, ranks Kentucky 33rd among all states for its business tax climate. Becca Schimmel of the Ohio Valley ReSource at WKU Public Radio says the ranking is an indicator of how competitive the commonwealth is with other states.

One big factor in the ranking is the state’s inventory tax, which places a levy on inventories a business holds in the commonwealth. Schimmel says Kentucky is one of only 14 states to use the tax, and it tops the list of taxes that Gov. Matt Bevin wants to eliminate. He contends the tax incentivizes companies to hold their inventories elsewhere, or to simply leave the state altogether.

But ending the inventory tax would hurt local school districts that rely on its proceeds for funding, says Schimmel. For example, Caverna Independent Schools in Barren County gets 15 percent of its budget from inventory tax revenues.

A Lexington Herald-Leader review of the state’s film tax incentives shows that Kentucky has provided more than $90 million in refundable tax credits to companies that produce feature films, documentaries, and commercials in the commonwealth.

Cheves says the program that reimburses up to 35 percent of the costs of filming a production in Kentucky got off to a slow start in 2009, but now the state is approving $5 million a month in tax credits. He says communities enjoy hosting film crews that need to be housed and fed and supplemented with local labor. The state also enjoys the promotional value of having a movie set in the commonwealth.

But Cheves says the problem is there are no economic impact studies to prove that state is recouping its investment. He says it’s hard to justify tax breaks to a Hollywood producer when the state has such limited funding for pension, education, and health care needs.

A number of states that once offered lavish tax incentives to filmmakers have since repealed the credits because they weren’t generating enough return, according to Cheves. Gov. Bevin has promised a thorough review of all tax breaks and incentives as part of an overhaul of the state’s tax codes.

Child Well-Being
The National Survey of Children’s Health shows that 53 percent of Kentucky children have had at least one adverse childhood experience, such as the death of a parent, abuse in a living situation, or drug use in the home. Schimmel says that puts the state above the national average of 46 percent.

The report also says Kentucky children are less resilient in the face of those adverse experiences, so they are more likely to develop behavioral or mental health problems as well as chronic health conditions as they grow older. She says nearly a third of young people in the commonwealth already suffer a chronic health problem.

The number of children going into state foster care is also on the increase. Cheves says 11,387 kids lived in state care in 2016. That’s a 15 percent increase in the last five years. He also says that the number of kids who are ultimately returned to their parents is decreasing. Today only about two-thirds of foster children return to their original families. A few years ago the return rate was closer to 75 percent.

Cheves reports that the state needs hundreds of additional social workers being paid higher wages to deal with the foster care crisis.

Terminations Follow Basketball Scandals
The University of Louisville has officially fired its athletic director and its Hall of Fame men’s basketball coach. Smith says the U of L Athletic Association Board cited a recent pay-for-play scandal and an earlier sex scandal involving basketball recruits and players in ending Rick Pitino’s tenure as head coach.

In a separate action, the U of L Board of Trustees voted 10 to 3 to terminate Pitino’s boss, athletic director Tom Jurich. Smith reports that interim U of L President Greg Postel said Jurich was fired “for cause” but then declined to disclose the specific reasons for that action. 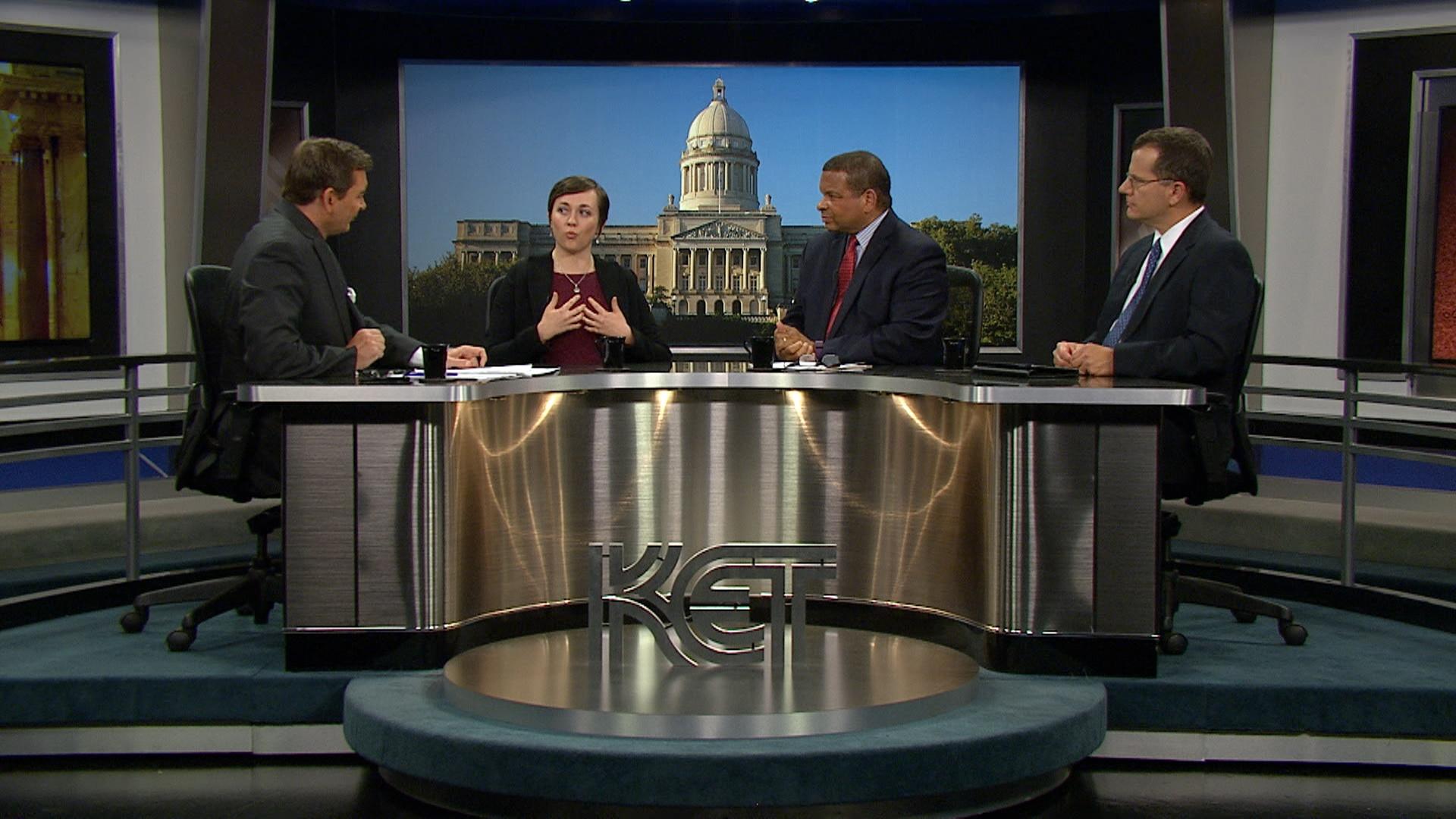