The gubernatorial race that had yet to engage the enthusiasm of many voters may have finally found its spark, albeit one that most people wouldn’t have expected and some might prefer to do without.

The journalists on KET’s Comment on Kentucky discussed the ongoing legal battle being waged by Rowan County Clerk Kim Davis and how it could focus religious conservatives on the November elections.

Davis Goes Free But Legal Issues Remain
Ronnie Ellis of CNHI News Service says an estimated 4,000 people rallied on behalf of Davis last Tuesday at the Carter County jail, where she was being held on contempt of court charges. He describes the scene as a cross between a tent revival and a political rally that featured preaching, music, and Republican politicians including presidential candidate Mike Huckabee and gubernatorial contender Matt Bevin.

Davis had been held for five days for ignoring U.S. District Court Judge David Bunning’s order to issue marriage licenses to gay couples. But just before the official start of the rally, Bunning released Davis. John Cheves of the Lexington Herald-Leader says Bunning was content that justice had been served since deputy clerks in Davis’ office were issuing licenses.

Cheves adds that Bunning warned Davis not to interfere with the licenses or her deputies when she returns to work on Sept. 14. That morning, Davis spoke in front of the Rowan County courthouse. She said she would not order her deputies to refuse to issue marriage licenses, but she also said that the licenses would be issued without her name, title, and authority.

Even if the Rowan County deputy clerks issue marriage licenses, the matter promises to remain front-page news as other legal proceedings are still pending. Cheves says several of the couples who were first denied marriage licenses by Davis have sued her for damages.  And Davis is suing Gov. Steve Beshear over the directive he issued after the U.S. Supreme Court decision recognizing gay marriage. Beshear’s mandate directed Kentucky County Clerks to issue marriage licenses to same-sex couples.

Case Energizes Conservatives
The Kim Davis story has ignited social conservatives who contend the clerk’s religious liberties are being abused. Joe Gerth of the Louisville Courier-Journal says Democrats fear that will boost voter turnout in the November elections for candidates that are supporting Davis. That group includes Republicans Bevin and Whitney Westerfield.

Gerth says Democratic gubernatorial nominee and current Attorney General Jack Conway is trying to say as little as possible about the Davis matter. Conway is politically vulnerable to conservative attacks on the issue since he declined to defend Kentucky’s gay marriage ban after a federal judge overturned it in 2014. Gerth says Conway reasoned that an appeal would be costly and ultimately unsuccessful.

Last week Conway declined to appoint a special prosecutor to explore criminal misdemeanor charges against Davis for not doing her duties. John Cheves says Conway saw no need to get involved since the federal courts are handling the matter.

On the Campaign Trail
Conway released a new campaign ad that attacks Bevin for changing his stance on policy positions and then denying his original statements. But Joe Gerth says he’s uncertain whether the spot will have much impact among voters who seem to favor anti-establishment candidates like Bevin.

In Lexington last week, Bevin told a chamber of commerce group that he’s already vetting potential members of his gubernatorial administration. Ronnie Ellis says the move is seen as presumptuous by some, but he thinks Bevin may be trying to calm Republican leaders who are concerned about who Bevin would install in key government positions. He says Bevin’s lack of political experience has led to some gaffes by the candidate regarding state pension payments and the health insurance exchange Kynect.

Gerth says it’s understandable that Bevin, a Louisville businessman, would want outsiders in his administration. But Gerth also says a new governor can benefit by surrounding him or herself with individuals who have government experience. He says the administration of former Gov. Ernie Fletcher suffered from a lack of such expertise.

Bevin and Conway, along with independent candidate Drew Curtis, will meet for the first televised gubernatorial debate on Sept. 15 at Bellarmine University in Louisville.

Frankfort News
The secretary of the Nevada Senate will be the new director of the Kentucky Legislative Research Commission (LRC). Ronnie Ellis says David Byerman was among 30 applicants for the job that will pay $135,000 a year. Ellis says Byerman impressed the search committee with his knowledge of the audit the National Council of State Legislatures conducted of LRC operations after several staff members accused a legislator of sexual harassment.

And Joe Gerth reports that the Securities and Exchange Commission is charging former Lt. Gov. Steve Pence of fraud. The civil complaint alleges that Pence was the front man for a company actually operated by a convicted felon. Gerth says Pence denies the charges. The Republican served as lieutenant governor from 2003 – 2007 under Gov. Ernie Fletcher. 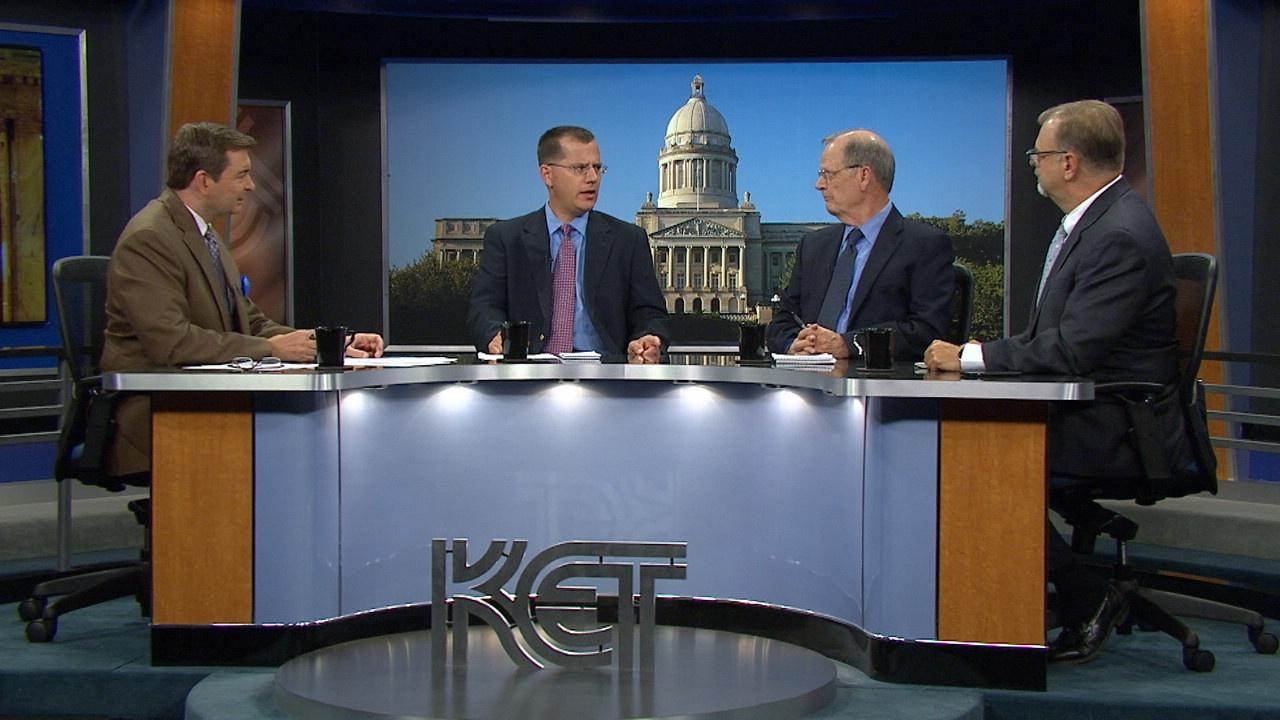