Journalists from around the state discuss news of the week with host Bill Bryant, including a major scandal involving the University of Louisville basketball program and an FBI investigation. Guests: Phillip M. Bailey from the Louisville Courier-Journal; Daniel Desrochers from the Lexington Herald-Leader; Chris Otts from WDRB in Louisville; and John Stamper from the Lexington Herald-Leader.
S43 E46 Length 26:36 Premiere: 9.29.17

The news has not been good for the University of Louisville in the last 15 months: a shake-up of the school’s board of trustees, a president forced to resign, allegations of financial mismanagement at the U of L Foundation, academic probation, and NCAA sanctions against the men’s basketball team for allegedly providing strippers to recruits.

Then more stunning headlines shook the scandal-weary university community last week when the FBI announced an investigation that implicates U of L coaches in funneling $100,000 to a five-star basketball recruit.

The journalists on KET’s Comment on Kentucky detailed the story that could end the careers of the school’s Hall of Fame coach and popular athletic director. They also discussed several recent court rulings on gubernatorial powers and anti-abortion legislation, public school test results, and the latest on the pension crisis.

Louisville Rocked by Another Basketball Scandal
The University of Louisville was among several schools implicated in a 28-page U.S. Dept. of Justice complaint unsealed last week. Phillip M. Bailey of The Courier-Journal says U of L was not mentioned by name, but described as “University-6,” a public research institution in Kentucky with 22,640 students, which fits the profile of the Louisville school.

Interim U of L President Greg Postel later confirmed that Louisville was University-6. Bailey says the player allegedly set to receive $100,000 was Brian Bowen, a five-star forward from La Porte, Ind. Bailey says the freshman has been suspended from the team.

The complaint alleges a U of L assistant coach and another coach were involved in the scheme to funnel money from sports apparel company Adidas to Bowen’s family. Bailey says his newspaper and other media outlets confirmed through law enforcement sources that the identity of “Coach-2” is Pitino. Pitino and his attorney, Steve Pence, have dismissed those allegations. Bailey says Postel knows the identity of Coach-2 but will not disclose it to the media.

This scandal comes while U of L was already on NCAA probation for allegedly providing strippers to basketball recruits. Pitino also came under scrutiny for having sexual relations with the wife of a team equipment manager in 2003. Bailey says the school’s fan base is divided between those who want to keep Pitino and those who want the coach fired for what they see as a third offense.

The scandal could impact the broader Louisville community if the school receives a so-called “death penalty” from the NCAA and is restricted from playing basketball games for a year. Bailey says that would impact the rent U of L pays to the YUM Center, which would affect the center’s ability to make its debt payments. Otts says YUM Center officials got final approval last week to refinance the facility’s bonding and put the center on a more sustainable fiscal path. But he says news of this investigation could lower the investment grade rating the financially-troubled center hoped to receive for its bonds.

On Friday, U of L announced that assistant basketball coach and former Louisville player David Padgett would serve as interim head coach of the Cardinals. Bailey says the players wanted Padgett, but he says Padgett’s connections to Pitino could prove problematic to his long-term job prospects at U of L.

Amid the bribery investigation, Postel reported on the state of his university to Kentucky legislators on Thursday. Daniel Desrochers of the Lexington Herald-Leader says Postel tried to strike a tone of optimism by stressing that the basketball scandal is not the end of the world for U of L. The interim president told lawmakers the school is making gains in diversity and in ACT scores.

Court Rulings
The Kentucky Supreme Court dismissed a legal challenge to Gov. Matt Bevin’s move to reorganize the University of Louisville Board of Trustees in 2016. John Stamper of the Lexington Herald-Leader says the court ruled that Attorney General Andy Beshear’s lawsuit over Bevin’s executive action is now moot because state legislators have since rewritten the law to give governors greater authority to restructure university boards.

Stamper says both sides declared a victory in the matter. He says the Bevin Administration had argued that the case should be dismissed since the General Assembly changed the pertinent law earlier this year. Meanwhile Beshear’s office claimed the court ruling did not validate Bevin’s original move to dissolve and then reconstitute the U of L board.

In a separate matter, the court ruled that a 2016 law expanding the look-back period for drunk-driving cases can be applied retroactively. Stamper says in sentencing DUI cases, judges were able to look back five years to see of the offender had any previous drunk-driving charges. Under the updated law, that look-back period now extends to 10 years. Stamper says the court ruled the longer look-back could be applied to cases that were already in process in 2016.

And a federal judge ruled last week that Kentucky’s new ultrasound law violates the First Amendment rights of doctors. Desrochers says the law passed earlier this year requires that a woman have an ultrasound prior to having an abortion, and that a doctor must show and describe the ultrasound to the woman.

U.S. District Judge David Hale said that violates the free-speech rights of doctors by forcing them to discuss the images with the patient.

The American Civil Liberties Union and EMW Women’s Surgical Center brought the case against House Bill 2. Desrochers says the Bevin Administration’s general counsel, Steve Pitt, argued that the law is in the best interest of the woman.

Stamper says the governor plans to appeal the ruling. Bevin says the 5th and 8th circuits of the U.S. Court of Appeals have upheld similar laws, and he expects the 6th circuit, of which Kentucky is a part, will do the same, according to Stamper.

Education News
The Kentucky Department of Education released the 2017 school testing scores last week. They show graduation rates statewide have improved to nearly 90 percent, but other results are inconclusive, says Stamper. He says this is a transition year in which KDE is moving from rating schools as distinguished, proficient, or needs improvement to implementing a five-star grading system. So the raw numbers issued this year make it difficult to determine if a school’s performance has improved over previous years, or how one district compares to another.

Meanwhile truancy continues to be a major issue for schools and students. Stamper says in the 2015 school year, some 60 percent of students across the commonwealth were labeled as truant for having three unexcused absences. Some 40 percent are habitually truant, he says, for having six unexcused absences. And 22 percent of students are chronically absent, meaning they miss more than 17 days of school.

Stamper says research indicates that missing more than two weeks of school will hurt a student’s achievement. He says truancy is most prevalent in eastern Kentucky districts.

Pension Updates
As many as 6,000 state workers are eligible for retirement and could leave their jobs by the end of the year. If that happens, Stamper says the Kentucky Retirement Systems would lose about $100 million in contributions into the state pension plans.

Officials with KRS and the teachers’ retirement system are requesting $5.4 billion for their plans over the next two years. Stamper says that will amount to $1 out over every $4 in state spending.

State lawmakers are expected to address pension reform in a special legislative session later this year. 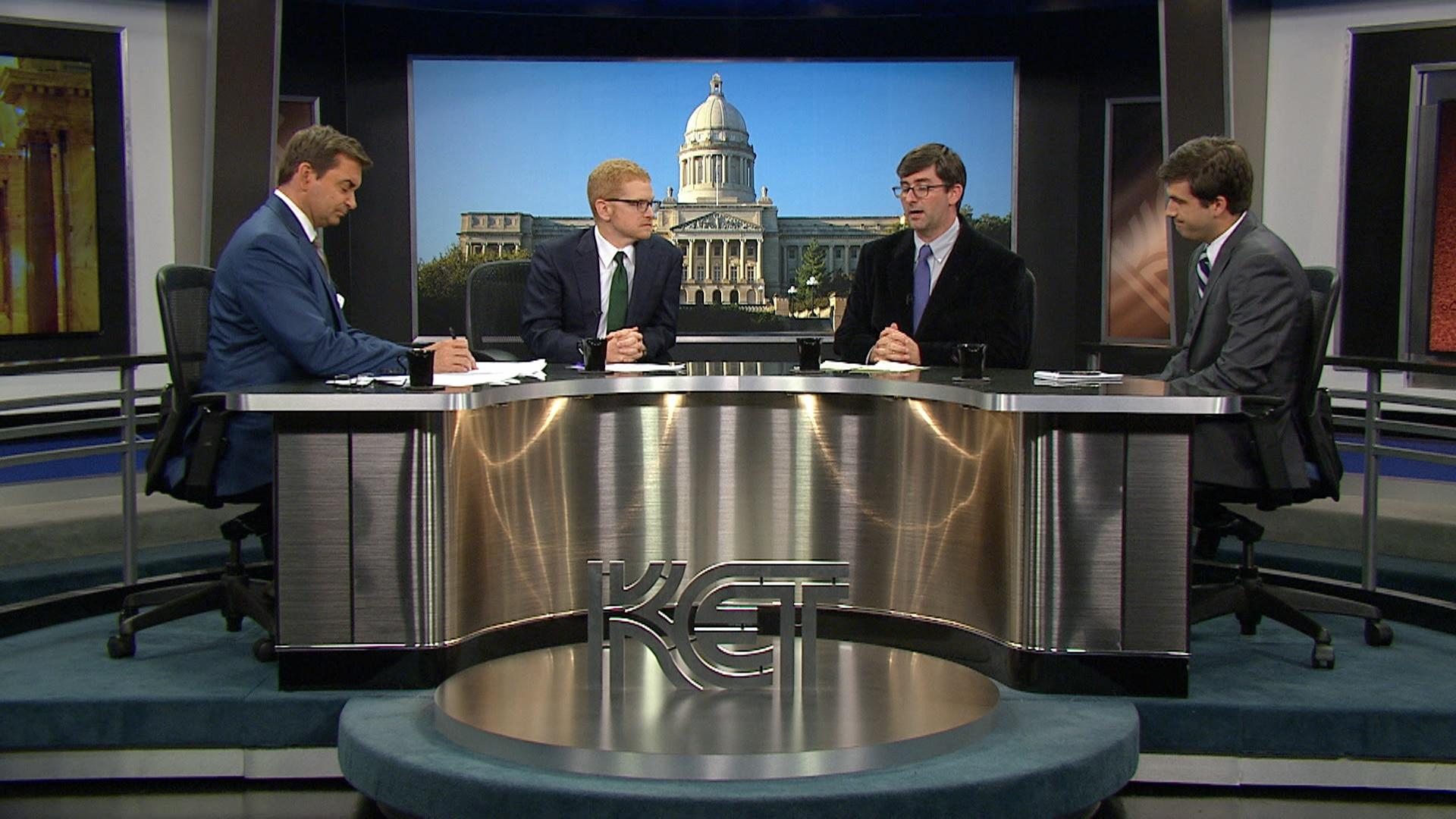