Renee speaks with Republican lieutenant gubernatorial candidate Jenean Hampton. If elected, she would become the first African-American to hold the office of Lieutenant Governor in Kentucky.
S1 E1 Length 29:20 Premiere: 10.18.15

When Jenean Hampton took the stage at the Fancy Farm political picnic in August, she opened her speech by acknowledging her unique position in state politics.

“I’m something you haven’t seen: I’m a black conservative,” Hampton told the western Kentucky crowd. “So you’ll just have to judge me based on the content of my character, my experience, and my qualifications.”

Hampton is running for lieutenant governor on the ticket with Republican Matt Bevin. She discussed her upbringing, her political philosophy, and her historic candidacy on KET’s Connections.

Peer Pressure to Fail
Hampton grew up in inner-city Detroit, the daughter of a single mother who never graduated from high school. She credits her mother with teaching her valuable life lessons like frugality and doing the right thing even when it’s not easy, but Hampton says she also realized that she wanted a different life from what her mother had.

Getting there wasn’t easy, though. Hampton says she faced a great deal of peer pressure from her classmates, not to succeed but to fail.

“Instead of being happy for you, these kids questioned my good grades, they questioned the way I spoke, they questioned the fact that I was reading all the time… and the charge is that you’re acting white,” Hampton says. “I just remember wondering at what point in life I would get to just be Jenean with my own likes and dislikes.”

The young Hampton found inspiration in two unusual sources: NASA and the U.S. Constitution. She recalls curling up on the family couch to watch the space agency’s lunar missions, impressed by the enormity of the undertaking and dreaming of becoming an astronaut herself one day. Then when she read the Constitution in school, Hampton realized it resonated with the bigger dreams she had for her own life.

“I just decided that I had more options,” Hampton says, “and it was up to me to pursue happiness. I believed that no one owed me money or a job or anything, except the pursuit of life and liberty.”

Drawn to Republican Values
Hampton paid for college using grants, scholarships, and money she saved working at General Motors and obtained an industrial engineering degree from Wayne State University in 1985. She declined several job offers and instead joined the U.S. Air Force with the hopes that she still might become an astronaut.

Part of her military tenure was under President Ronald Reagan, whose positive, can-do attitude about America appealed to Hampton. She says she was drawn to the GOP values of respect for life, personal responsibility, and equal opportunity but not equal outcomes.

“I believe I’m perfectly capable of running my own life, of making decisions for me,” Hampton explains. “But the policies of the Democrat Party seems to be that you need government to run your life for you.”

Hampton served seven years in the Air Force. She worked as a computer specialist and did a tour in the Middle East during Operation Desert Storm. During that time she also met her future husband, Air Force flight surgeon Doyle Isaak. The two have been married for 15 years.

“Probably her most important characteristic is loyalty,” Isaak says. “She is one of the most loyal people I know.”

After her military service, Hampton worked 19 years in the corrugated packaging industry in management and sales jobs for companies including Weyerhaeuser and International Paper Company. She and Isaak have lived in Bowling Green for more than a decade.

A Chance to Make History
Hampton’s first foray into elective politics came in 2014 when she ran against Democratic Rep. Jody Richards, a 38-year veteran of state legislature and former House Speaker. Although she only garnered 37 percent of the vote, Hampton says she loved the process of fundraising, writing campaign materials, and doing precinct analysis.

She met Louisville businessman Matt Bevin when he was considering a run in the 2014 U.S. Senate race against Mitch McConnell. Hampton was part of the team that vetted Bevin for that campaign.

But when it came time to support a Republican in this year’s governor’s race, Hampton admits Bevin wasn’t her first choice. She had planned to support Agriculture Commissioner James Comer, but then Bevin called and asked Hampton to be his running mate.

“I chose Jenean because she is somebody who I have tremendous respect for,” Bevin says. “I’ve gotten to know the integrity that she has to the core of her being. She is somebody who is truly wise, and she brings a perspective rarely seen in the Republican political scene in Kentucky or America.”

If elected, Hampton would be the first African American to serve in statewide office in Kentucky. Hampton says Bevin didn’t select her because of her race and she says she doesn’t think much about the groundbreaking aspects of her campaign.

“I’m actually more excited at the opportunity to turn Kentucky around,” Hampton says. “I think that could be truly historic.”

She says improving employment in the commonwealth is the top issue for the Bevin-Hampton campaign. She contends voters need to elect two non-politicians that have private-sector experience at creating jobs.

A Call to Serve
As she reflects on her life, Hampton says she has been driven by her faith, the values of liberty, freedom, and family, and a deep reverence for the Constitution. She says she feels prepared to step in for Bevin if he is unable to serve as governor, but admits she doesn’t aspire to the state’s highest office. She says her faith led her to politics and it will have “a very big place” in how she governs.

“If God was not in my life, I would probably not be doing this,” Hampton says. “But I just felt compelled to accept Matt’s offer because I believe that we have both been elevated to do this.”

And Hampton still hasn’t given up hope on being an astronaut. She jokes that she has warned Bevin that she will immediately resign as lieutenant governor should NASA come calling for her.

A discussion about the 2015 lieutenant gubernatorial race. 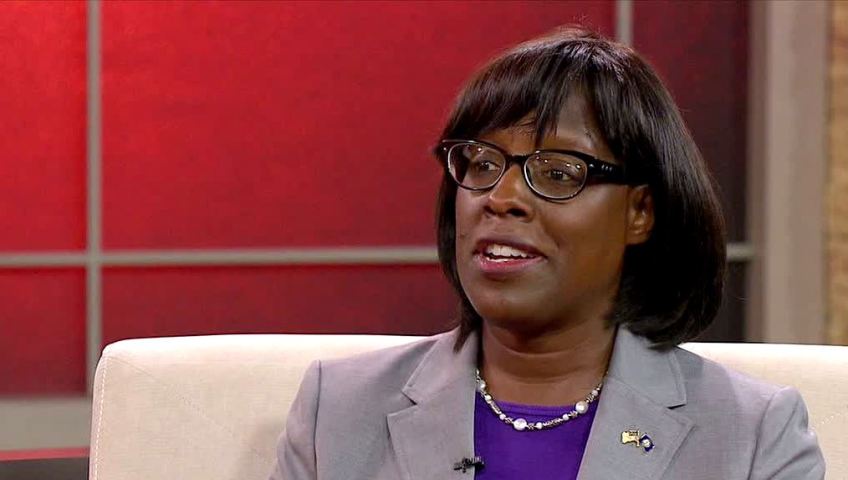