After more than a quarter-century in Frankfort, then-House Democratic caucus leader Joni Jenkins surprised her colleagues and supporters when she suddenly withdrew her candidacy for reelection early last year.

Under redistricting, her 44th state House district in southwestern Jefferson became majority minority with the addition of areas of West Louisville. As a white woman, Jenkins decided to step aside and open the door to more minority representation in the General Assembly.

“I just felt like if we had the opportunity to elect another person of color, because there are so few serving in Frankfort, that I didn’t want to be the person that stood in the way of that,” says Jenkins.

Now enjoying her retirement, Jenkins says she will have more time to devote to sleeping, exercising, and gardening. But beyond that?

Decades of Change and Transition

When Jenkins arrived in Frankfort after her election in 1994, Democrats controlled both chambers of the General Assembly, women office-holders were few and far between, and legislative sessions happened every other year. Jenkins says she appreciated having the off-year of interim meetings to acclimate to the job.

“You had that year to get to know people, to go to committees, and kind of get a feel for it before you really jumped in and had a full-blown session,” she says.

Learning how to navigate the state capitol complex provided its own challenges.

“It took me about five years to figure out where the bathrooms were,” Jenkins adds with a laugh.

She left in 2022 having been elected the first female floor leader of either caucus, and the GOP firmly in control of the House and Senate. In all the partisan jockeying she’s seen over the years, Jenkins says she’s surprised by how the current Republican leadership has moved to strip powers from the executive branch.

“In my time in the legislature, there’s always been a quest to make the legislature relevant and independent and more powerful,” she says. “But there has to be a balance there and I think we may have flipped that balance a little bit, and I think that’s due to political philosophies more than what really works for Kentuckians.”

When it came time in the 2022 session to act on a proposed amendment to the state constitution to allow the legislature to call itself into special session, Jenkins voted to put the proposal before voters. But she says that doesn’t mean she supported the idea of letting lawmakers do something historically only reserved for governors.

“I was a little hesitant even in that vote because I haven’t seen this General Assembly in the years I’ve been there under two different majorities make the most mature decisions about things,” she says.

That amendment failed in the November elections, 54 percent to 46 percent.

As the demands of being a lawmaker grew after annual sessions launched in 2001, Jenkins left her full-time job running a women’s shelter. But victims’ services remained a priority for Jenkins, as did education and help for individuals battling addiction.

The drug scourge hit too close to home when Jenkins lost a nephew to an overdose in 2013. As a result, the Democrat shepherded bills that moved the state to start addressing the opioid crisis and to launch one of the first needle-exchange programs in the nation. Jenkins says those bills made it to final passage because the partisan breakdown of the House and Senate was still closely divided in those days.

“We really hammered out what I think was good policy because we had to listen to each other and we had to compromise,” she says.

Before she retired, Jenkins had hoped to pass an additional harm reduction measure that would have created so-called safe consumption sites where those with an addiction can go and use their drug of choice under medical supervision. The idea is to reduce the risk of overdose or the transmission of disease from an infected needle, and to increase the chance of getting users into addiction treatment.

Jenkins understands resistance to the idea, saying she would’ve opposed it herself a decade ago. But she says data from New York, Canada, and elsewhere indicate these sites successfully move people from addiction to recovery.

On domestic violence, Jenkins says it’s time for lawmakers to think “outside the box” to address the issue. She says interventions that help at-risk families before violence occurs are important, as is providing more trauma-informed care for children.

Jenkins is dismayed at how Frankfort Republicans have targeted the Jefferson County Public Schools. For example, lawmakers passed bills that strip powers from the county’s board of education and to allow charter schools in Metro Louisville. As a public-school advocate, Jenkins says GOP leaders should let parents in Jefferson County decide the future of their schools. She points to how voters solidly rejected far-right school board candidates who ran in the last election.

“Louisvillians are watching and they have made decisions on how they want their public schools run,” Jenkins says. “Leaders in Frankfort should pay attention to that.”

‘Stay True to Your Values’

As she gets used to her new seat on the political sidelines, Jenkins says she hopes lawmakers will take the long view when it comes to policymaking. She says just because Republicans control the legislature now doesn’t mean the pendulum won’t someday swing back the other way.

“I reminded my colleagues many times that what you’re doing today could harm the institution, so let’s make sure we keep it healthy,” says Jenkins.

She’s also curious to see how her legacy might unfold in the future. She recalls a high school student she worked with years ago when the girl was doing a class project on dating violence legislation.

That girl, Rachel Roarx, is now 25 years old, and was sworn in earlier this month as the youngest female legislator in state history. To Rep. Roarx and all her former colleagues, Jenkins offers this bit of parting advice:

“You have to know what your values are and stay true to your values, and everything else kind of falls in place from that,” she says.

Renee Shaw talks with Whitney Austin, who narrowly survived a shooting at a Cincinnati bank three years ago. Now, she's the founder of Whitney/Strong, an organization dedicated to forging common-sense, bipartisan solutions to reducing gun violence.

After more than three decades in the newspaper industry, Rufus Friday talks about his new role as executive director of The Hope Center, Inc. and One Parent Scholar House, which provides comprehensive services to the homeless and those at risk. Friday is a former president and publisher of the Lexington Herald-Leader.

Renee Shaw speaks with hip hop artist, community activist, and motivational speaker Devine Carama about his appointment as director of One Lexington, a program that mobilizes city government and community resources against violence and other topics. 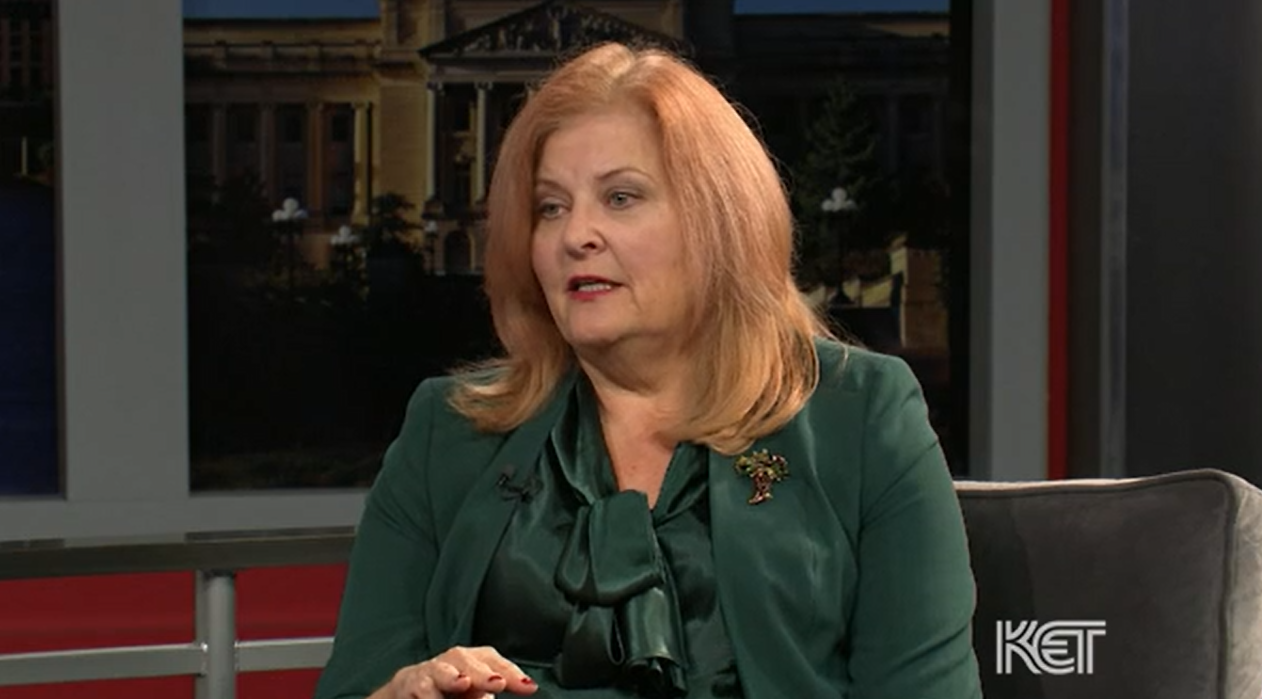