2019 State of the Commonwealth & Budget Address

In his fourth State of the Commonwealth address, Gov. Matt Bevin touted his administration's accomplishments since he took office, and urged lawmakers and Kentuckians to unite to address the challenges that still remain.

Transcript of Gov. Bevin’s 2019 State of the Commonwealth and Budget Address (.pdf)

Gov. Matt Bevin combined a slide show of Kentucky people and places with a checklist of his administration's accomplishments during his State of the Commonwealth address to lawmakers Thursday night. It was the governor's fourth such presentation to a joint session of the General Assembly, and it comes as he prepares for a reelection campaign this year.

"I am delighted to be able to say, as I do when I talk to people all over this country and all over the world, that the state of the commonwealth is strong - very strong," Bevin said. "We have much to celebrate tonight."
Promises Made, Promises Kept
Throughout his speech, Bevin reiterated the theme of “we are Kentucky” to remind lawmakers of the goodness that exists in the commonwealth and the strengths that Kentuckians can draw on to address lingering challenges. He referred back to his 2015 campaign document, Blueprint for a Better Kentucky, to review the promises he made to voters during his first gubernatorial race. He said his administration, with the help of lawmakers, has kept many of those pledges.

– Pro-business legislation: Bevin praised the legislature for enacting right to work, and a repeal of prevailing wage. He said those changes have contributed to nearly $18 billion in new private capital investments and almost 50,000 new jobs for the state.

– Tax Modernization: The governor said the 2018 tax reform bill has increased Kentucky's business competitiveness. But he said lawmakers must continue to transform the state tax system from one based on production and income taxes to one based on consumption taxes.

– The pension crisis: Bevin did not mention the failed special session he called on pension reform in December. Instead he highlighted the funding that has been allocated to the pension plans during his time in office.

“This is the first administration, supported in turn by legislation that came out of this body, that has funded 100 percent of the ARC, ever,” said Bevin of the state’s actuarially required contributions to the pension systems.

But money won't be enough to solve the problem, according to Bevin. He warned that structural changes to the system will be required.

– Reshaping government: Bevin said 562 state regulations have been eliminated and another 571 have been updated. He also touted repairs to the Kentucky Capitol, state parks, and 1,000 bridges in the commonwealth.

– Education Improvements: The governor said the state has allocated the highest per-pupil funding in history, provided more than 16,000 work-ready scholarships for training in job skills most needed in the commonwealth, and provided $15 million for high school students to take dual-credit classes.

– Health care: Bevin said his administration's 1115 Medicaid waiver will empower Kentuckians to improve their own health outcomes. The waiver requires able-bodied adults with no dependents to work, go to school, or volunteer 20 hours a week. The waiver also enables the state to allocate Medicaid dollars for behavioral health needs.

“These are seeds in the ground,” Bevin said. “They will take time to germinate, but expect them to make a profound difference.”

– Fighting federal regulation: Bevin said his administration has fought federal rules on overtime, transgender bathrooms, waterway protection, and other issues. Now he said it's time for a new approach.

“No longer are we pushing back,” said the governor. “We are now being sought out here in Kentucky increasingly as a state to emulate... Now we are leading the nation in regulation reform.”

Protecting the Youngest Kentuckians
In spite of these achievements, Bevin said the state still faces significant challenges. He noted the deaths of two Marshall County High School students in a shooting last year, the suicide of Louisville youth who had been bullied, and the recent overdose death of a college student.

The governor also paid tribute to fallen law enforcement officers and praised citizens who rallied around the members of a Louisville Hindu temple that was vandalized last month. Then he encouraged all Kentuckians to read the sacred texts of their faith tradition.

“I don't know of any [faiths] that would encourage us to not become better versions of ourselves,” he said. “We don't have to agree on everything… but we can sure extend our love to one to another.”

Bevin saved his harshest words for states that have proposed abortion legislation that he described as "straight-up infanticide.” He said he is proud to be the governor of a state where the vast majority of lawmakers are pro-life. He pledged that his administration will continue to promote legislation to limit abortions, and defend those laws in court even when the state Attorney General won’t.

The governor also challenged Kentucky's churches to get their members to provide forever homes for some 2,700 children in state care who are eligible for adoption. He said it may not always be in the best interest of a foster child to return them to their biological families.

“The energy landscape is changing, but guess what: We have hundreds of years of an incredible resource that still provides the cheapest and most reliable electricity in America and in the world,” Bevin said of coal, “and we sit on an abundant supply of it.”

He urged Kentuckians to attend a rally this weekend in Muhlenberg County to protest the planned closure of the Tennessee Valley Authority's Paradise Unit 3. He said the closure of the coal-fired generator would hurt every community in the state and make Kentucky less competitive.

In closing, Bevin returned to his theme of "we are Kentucky," and encouraged lawmakers to tell their constituents about the progress the state has made.

“We are so blessed to live in the commonwealth,” the governor said. “United we stand, divided we fall. We are Kentucky.”

Reaction from Legislators
Senate President Robert Stivers (R-Manchester) and House Speaker David Osborne (R-Prospect) praised the governor for offering a positive, impassioned speech. Stivers said any friction that exists between the legislative and executive branches is natural. The senator said there is broad agreement between the Republican governor and lawmakers on their goals for Kentucky, but he acknowledged they sometimes differ on the methodology to achieve them.

As for legislative priorities, Stivers said he is eager to pass the school safety measure, Senate Bill 1. He praised the bipartisan, bicameral work that led to the legislation.

“It's a testament to what we can do when we sit down, take our time and work in collaborative fashion in both chambers and both parties,” Stivers said.

Osborne said SB 1, and its House counterpart, House Bill 1, show what can happen when lawmakers are willing to work across the aisle.

“[The bill] had outstanding participation from both majority members [and] minority members,” Osborne said. “There was never rhetoric allowed to come into the equation. It was simply about protecting schools and protecting children.”

During the remainder of the 30-day session, Osborne said he also hopes to pass legislation to clean up last year's tax reform package, as well as bills on welfare reform and kinship care. He also said lawmakers will find a solution to the pension crisis, but warned that it may not occur during the regular session. He said whatever bill comes forward must have the votes for passage, respect teachers and public employees as well as taxpayers, and withstand any potential legal challenges.

House Minority Floor Leader Rocky Adkins (D-Sandy Hook) said there are opportunities for bipartisan cooperation on issues like foster care, school safety, and the opioid crisis, but he disagreed with the governor's economic assessment of the commonwealth.

Adkins, who is also a candidate for governor this year, criticized the Republican tax reform bill, which he says raised taxes on 95 percent of Kentuckians. He also opposed what he sees as Bevin's attempt to "privatize" the state pension system, and to rollback the state's Medicaid expansion.

Senate Minority Floor Leader Morgan McGarvey (D-Louisville) praised the efforts of the Public Pension Working Group, and encouraged the body to explore alternative sources of revenue for the ailing retirement systems. He proposed a constitutional amendment to allow expanded gaming in Kentucky, with those revenues going to pensions for 20 years. McGarvey said legalized medical marijuana and a modernized tax system could also generate more revenue for the state,

“It’s good that the governor came in here and attempted to make a somewhat unifying speech,” McGarvey said. “But it’s going to take more than one speech on one night... We need some type of leadership that is going to bring people together to tackle the difficult problems we’ve talked about tonight.”

House Minority Whip Joni Jenkins (D-Louisville) cautioned that any talk of new jobs should focus on creating good jobs. She said she feared that Kentuckians working on infrastructure projects will be underpaid because of right to work and the repeal of prevailing wage. She said her priorities include bills to lengthen voting hours in elections, address sexual harassment among legislators, and resolve the pension crisis.

“I think the newly formed pension working group has been very transparent, has brought stakeholders to the table,” Jenkins said. “I think that’s a good first step as we look forward.”

“What I’m seeing this session is that we are starting to regain that trust, we’re starting to have some more open dialog,” Adams said. “If we’re ever going to come to a conclusion or ever come to some sort of compromise, it is going to begin with us trusting each other and us listening more.” 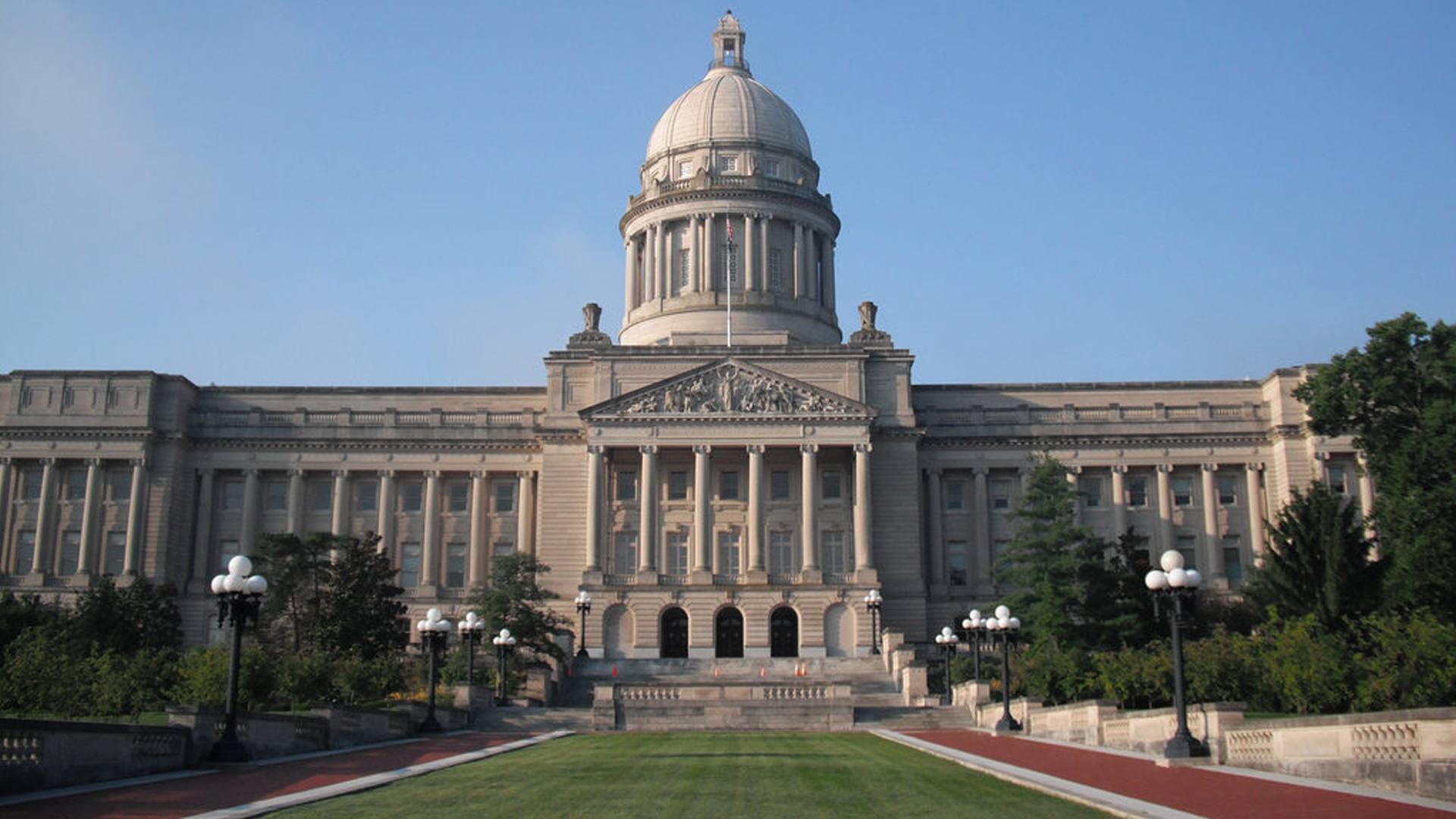