Before his interview with “Tribe” author Sebastian Junger even began, Joe Klein, political columnist for Time magazine, wanted the audience at the Kentucky Author Forum in Louisville to take notice: “I want to start this with an unpaid political announcement. This book is the most important book I’ve read this year,” said Klein.

“Tribe: On Homecoming and Belonging” examines the experience of the soldier through the lens of anthropology. The book’s premise is that combat re-creates the evolutionary past, when survival depended on a small communal group. Combat veterans — as well as the rest of society — struggle to live in a society that is increasingly fragmented.

Junger is author of “The Perfect Storm” and co-director of the award-winning war documentary “Restrepo.” The interview was recorded for KET’s Great Conversations at the Kentucky Center for the Arts in Louisville.

Tested by War
Junger, who grew up in a suburb of Boston and studied anthropology in college, talked about the genesis of the ideas behind the book. “I very much had the sense that young men should be tested, and without that testing they really can’t become adults,” he said. “And I looked around myself in Belmont, Massachusetts, and I realized there was literally no legal way to test myself in that society.” “There were plenty of illegal ways,” Klein added.

“There were plenty of illegal ways, and frankly, that explains a lot of illegal behavior particularly by teenage boys. And I should mention that teenage boys die at something like six times the rate teenage girls do from accidents and violence. They’re testing themselves, whether they say that or not to themselves.”

To test himself, Junger became a freelance reporter in war zones as a short-cut, he said, to becoming a working journalist. He went to Bosnia, then Afghanistan, then Sierra Leone, where he had what he called his first really frightening experience.

“It was the first time that I very, very seriously thought I was about to die,” he said. “I was stopped at a rebel checkpoint, and it looked like they were going to kill all of us. I was with some Sierra Leonian soldiers. And they didn’t. [kill us] But I spent about 15 minutes pretty convinced that they were going to. And that really–I’m an atheist, I don’t have a god to appeal to. I had to reach something in myself to get through it. And that changed me forever,” taking away his naivete about life.

Junger had his first combat experience while filming “Restrepo” at an isolated post in Afghanistan. He was leaning against a sandbag when dirt flew into the side of his face.
“I just had time to think — as you know, bullets go faster than the speed of sound,” he said. “So if you get shot at, you don’t hear the gunfire first, the bullet goes past you first. Some dirt flew into the side of my face, and I just had time to think, what was that? And then I heard snap, then dut-dut-dut-dut-dut. And it was the first round of the first burst of an hour-long firefight. And it hit the sandbag within a few inches of my head.”

The Communal Experience
Junger recalled a Native American mentor he had as a child and the stories he told. “He said throughout the history of this country, along the frontier, white people were always running off and joining the Indians. And he said ‘us Indians never ran off and joined the white people.’”

Years later, Junger remembered that lack of desire to go back to the homeland when the American soldiers from Restrepo wanted to return to war instead of going home. “And I thought, what is it about modern society, that if you are given an alternative, if you experience an alternative to it, you don’t want to return to it?”

Did Junger miss combat? “Yes. It is intense and ultimately it gives you a tremendous sense of urgency and meaning going on. But ultimately, and this is what I think is affecting the vets today – there is an incredibly communal experience in combat. You are sleeping shoulder to shoulder with 30 to 40 other people, taking your meals together, completely dependent on the group for your survival. The group in turn is dependent on your courage and your participation and your altruism to continue.”

Soldiers who’ve experienced that bond miss it on their return home, Junger said. “When you pick those people up and drop them back down in the great American suburb where an awful lot of people live, it precipitates a real crisis,” he said.

Junger said communities come together in crisis, because adversity brings out prosocial behavior needed for human survival. “When you deprive people of the experience of needing others, you are disrupting a very basic kind of human bond,” said Junger. “I grew up in a suburb. Not only did I not need the people in houses around me, I barely knew them.”

Klein said he believes men and boys are most profoundly affected by this alienation. Throughout history, Klein said, when a boy becomes a man, it’s a time for ritual. “We’ve abandoned that entirely, except for the very small fraction of boys and women who join the military. Only 1 percent of the population are combat veterans. You know what they call the rest of us, the 99 percent. Because we haven’t experienced that bond.”

Citizenship
Junger said society cannot ask its men to fight wars just to create a communal bond. Nor will society go back to living in groups of 30-40 people. “We are gathered in a group of 320 million in this nation. Humans have never attempted to bond in groups that large before.” A feeling of community doesn’t happen naturally in that context, Junger said. “We have to go out of our way to make that happen.”

One way to do that, Junger said, is to require national service of some kind. “It’s immoral to ask people to fight in a war they don’t believe in,” he said. But I think it’s extremely meaningful to ask for public service.”

Klein noted that surveys have found 90 percent of combat vets want to work in communities. “That makes them, I think, better citizens than the rest of us. In fact, one of the problems I’ve seen over my years as a political journalist is that we’re trying to do democracy without citizenship.”

Klein said that in his work covering the presidential campaign, he never hears politicians use the word responsibility. Offers of free tuition for college, he said, prompt him to think, “In return for what?”

Junger said that psychologically, people value what costs them more. “The problem with this country is we’ve become so affluent we actually don’t require our citizens to contribute anything. We pay our taxes, and grudgingly.”

Junger recalled his dismay when he got a card in the mail to register for the draft at age 18 back in 1980. He didn’t want to sign it. He was shocked when his father, a lifelong pacifist, told him he had to sign it and explained why.

“He said the United States saved the world from fascism. There are thousands, tens of thousands of Americans buried in his home country of France. … He said, you don’t owe your country nothing. But you might owe it your life. Hopefully not. But you might. We don’t know yet. So you’re signing that card.

Is Junger optimistic that tribal cohesion is possible in modern society? Junger said he believed economic expansion will likely end and society will be reordered. “Between the climate and the politics of the planet at this moment, it’s an extremely frightening time,” he said. “And it may be the beginning of this reordering. I don’t know. I think if there is a kind of reordering, it will go in the direction of something that’s recognizably human.”

Journalist and political commentator E.J. Dionne, a long-time op-ed columnist for "The Washington Post", talks about his book, "Why The Right Went Wrong: Conservatism - from Goldwater to the Tea Party and Beyond". He is interviewed by James Fallows, a National correspondent for "The Atlantic". The interview was recorded at the University of Louisville Kentucky Author Forum.

NPR host Diane Rehm discusses her book, "On My Own", about reconstructing her life after the death of her husband of 54 years. She is interviewed by author Ann Patchett. The interview was recorded at the University of Louisville Kentucky Author Forum.

Joe Nocera, long-time Business and Opinion writer for the New York Times, talks about his book, Indentured: The Inside Story of the Rebellion Against the NCAA. He is interviewed by Buzz Bissinger, author of Friday Night Lights and contributing editor at Vanity Fair. The interview was recorded at the University of Louisville Kentucky Author Forum.

Author John Irving discusses his new novel, "Avenue of Mysteries". His prolific career includes "The World According to Garp", which won the National Book Award in 1980, and "A Prayer for Owen Meany". Irving is interviewed by American historian Sam Tanenhaus, a contributor to Bloomberg Politics and Bloomberg View, and a columnist and associate editor at the British monthly, "Prospect". Tanenhaus is also a former editor in chief of the Sunday Book Review and Week in Review at "The New York Times". The interview was recorded at the University of Louisville Kentucky Author Forum. 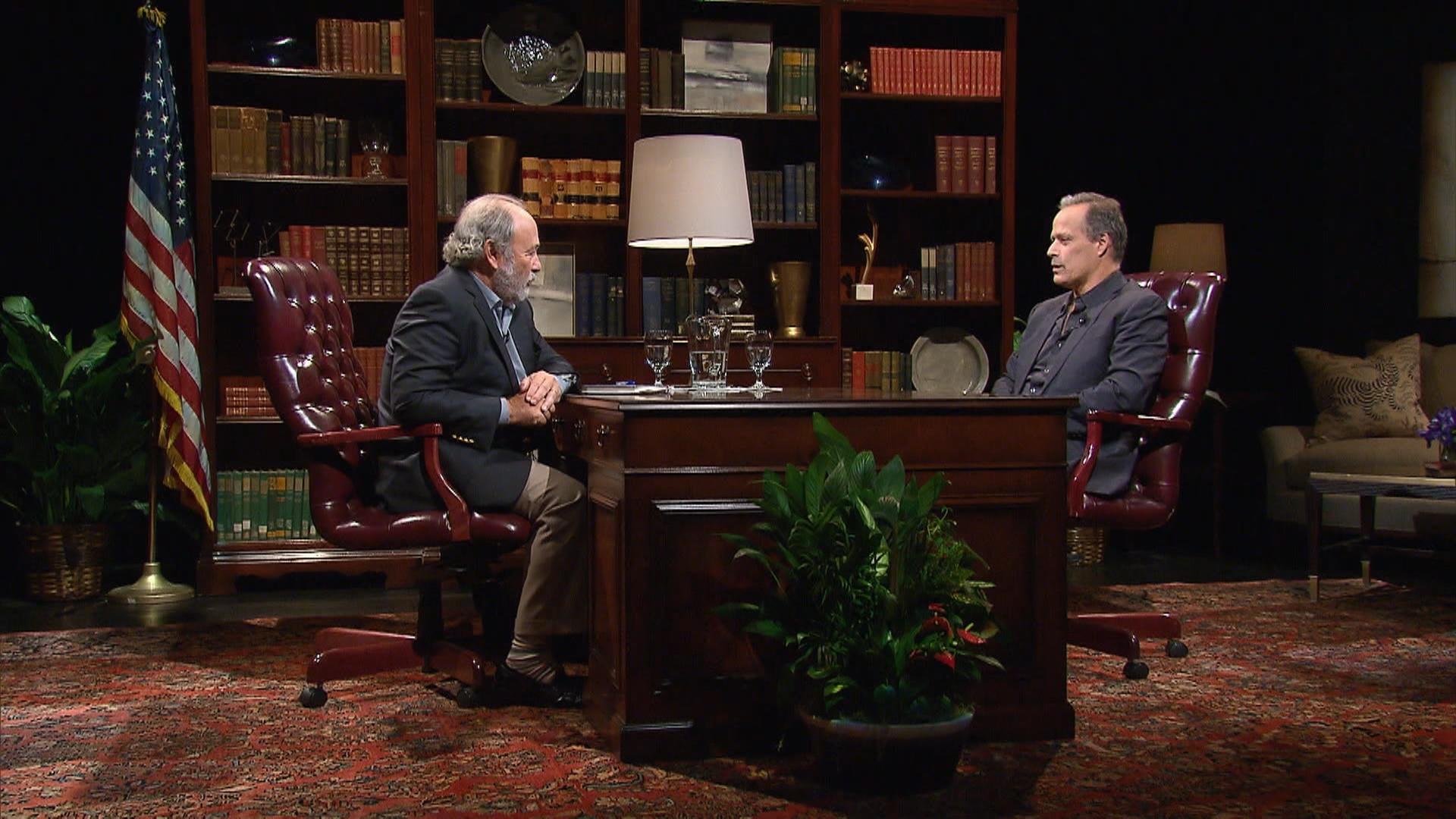