Five-time IBMA Female Vocalist of the Year Dale Ann Bradley performs at the 2013 Festival of the Bluegrass at the Kentucky Horse Park.
S18 E9 Length 58:13 Premiere: 8.4.14

Recognition of Dale Ann Bradley’s talents have been a long time coming, but now she’s getting her due as a five-time IBMA Female Vocalist of Year.

Raised in Williams Branch, a small southeastern Kentucky community outside of Pineville, Bradley didn’t enjoy running water or “safe” electricity until she was in high school, but she always enjoyed singing her entire life, first with hymns in her father’s “Primitive Baptist” church.

Her talents as a vocalist and guitarist were recognized by a high school music director and she was invited to perform with his family’s band, Backporch Grass, on the weekends at Pine Mountain State Park – initiating her long career, with a few starts and stops, as a bluegrass musician.

After a stint at Renfro Valley and with the band “New Coon Creek Girls,” Bradley set out on her own and has recorded a number of solo records, including 2011’s “Somewhere South of Crazy. The collection was a 2011 IBMA nominee for Album of the Year, and the titular track was a nominee for song of the year.

Here, during two sets at the 2013 Festival of the Bluegrass at the Kentucky Horse Park, Bradley, backed by vocalist and guitarist Steve Gulley, dobro player Phil Leadbetter, mandolinist Greg Hodge, bassist Bryan Turner, and Mike Sumner on banjo, delights audiences with a handful of original compositions, including the aforementioned “Somewhere South of Crazy” and the riotous “Run Rufus Run,” and with tasteful covers of bluegrass standards and even the pop gem “Summer Breeze.” 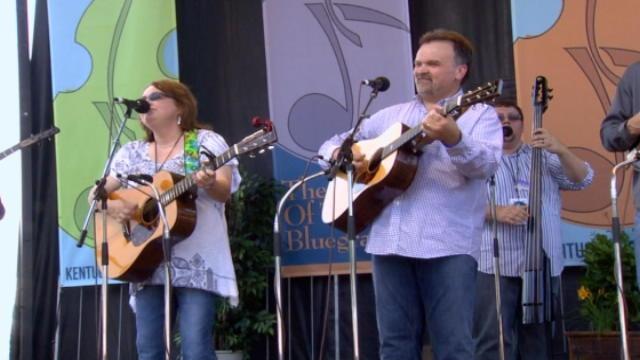