Lexington, Kentucky-based NewTown, led by vocalist and fiddle player Katie Penn, and Coaltown Dixie, an all-female group from Eastern Kentucky, perform at the 2013 Festival of the Bluegrass at the Kentucky Horse Park.
S18 E4 Length 57:53 Premiere: 6.30.14

Lexington, Kentucky outfit NewTown, fronted by the talented and versatile vocalist and fiddler Kati Penn, offers a tasty Newgrass sound without betraying any traditional bluegrass sensibilities. Backed by her husband, Jr Williams, who adds a layer of harmony vocals and his banjo to the lineup, the band, which also includes guitarist C.J.Cain and and mandolin player Clint Hurd, has been a popular local fixture, and enjoys performing in front of their hometown in this performance at the 2013 Festival of the Bluegrass at the Kentucky Horse Park.

Kati began playing the fiddle at the ripe age of 10 years old and quickly moved through a number of bands, including The Young Acoustic All Stars and the Dale Ann Bradley Band, before taking a stab at a solo career, albeit as country singer. Fortunately she was always happier pickin’ and grinnin’ with local bluegrass musicians and made the appropriate genre shift more befitting her skills as a musician.

Coaltown Dixie is a lively all-female troupe out of Eastern Kentucky, making their debut performance in this program from the 2013 Festival of the Bluegrass in Lexington, Ky. Founded by bassist Stephanie May Rose and mandolin player (and co-worker) Kris Bailey Preston, the two scouted out guitarist Kayln Bradford and banjo player Melanie Turner to round out the quartet.

Since forming in 2009, Coaltown Dixie has been performing their energetic, “high-heeled” take of bluegrass music at a number of renowned festivals and has released two albums of original songs, as well as a DVD live concert, “Live at the Sipp Theater.” 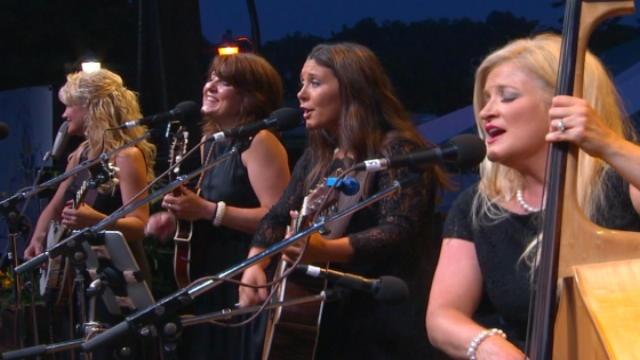