From the West Virginia foothills of Kanawha County, The Grass Stains have been crafting their progressive take on contemporary bluegrass since the late ‘90s when founding members guitarist Matt Poff and banjo player Bill Bagby got the ensemble together. Today, along with Poff and Bagby, members of the band include fiddle player Linda Cochran, guitarist Jarrod Saul, and bassist Valerie Gabehart.

The lineup includes a stellar assortment of seasoned songwriters, instrumentalists, and vocalists who showcase their musical prowess by instilling a wide variety of musical tastes and genres into their own brand of bluegrass music. The band has released two studio albums, 2002’s “Stains of Blue” and 2010’s “Still Stained.”

With more than a dozen albums recorded by a host of rotating band members through the years, Dry Branch Fire Squad has a large collection of bluegrass front-porch standards and modern ballads. While the band’s musical talents are always first and foremost, their live performances are renowned (and highly anticipated) due to Thomason’s witty on-stage antics, self-deprecating humor, and, of course, his ability to dance a jig.

Joining Thomason on stage for this performance at the 2013 Festival of the Bluegrass is guitarist Brian Aldridge, banjo player Tom Boyd, and bassist Dan Russell.

Mike Carr and Mike Hammonds, who go by the stage names Lardo and Burley, are better known throughout the bluegrass world as The Moron Brothers.

The overall-clad duo has been performing together since the mid-’90s, after playing off one another during spontaneous jam sessions that often spilled into the streets in front of Fire Station No. 5 in Lexington, Ky. Since that time they have unleashed a home-spun stage act, chock-full of humorous songs like “If My Nose was Runnin’ Money (I’d Blow It All on You).

While there might not be a dry eye in the audience during their live shows (and it’s not from the sad songs), the Moron Brothers’ musical talents are no laughing matter, as can be seen from their performance here at the 2013 Festival of the Bluegrass at the Kentucky Horse Park. 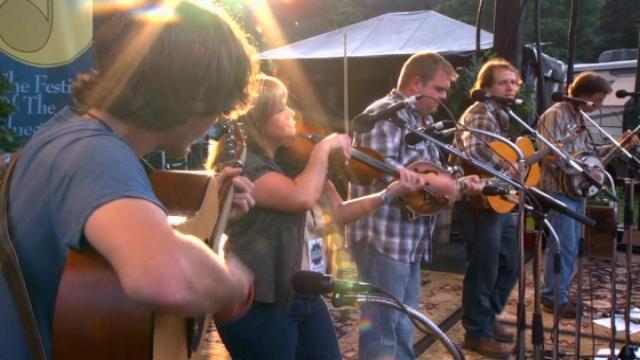