Town Mountain thundered down from the hill of musically fertile Asheville, North Carolina, with a cultivated style that’s traditional bluegrass, but with a trucker hat grit that gives the band its distinct sound.

Consisting of lead vocalist and guitarist Robert Greer, banjo player Jesse Langlais, bassist Nick DiSebastian, fiddle player Bobby Britt, and Phil Barker on mandolin, Town Mountain first started playing together during all-night jam sessions in the mid-2000s and has gone on to garner acclaim as IBMA Momentum Award recipients (2013 Band of the Year and 2013 Vocalist of the Year, for Robert Greer).

With three studio albums under their belt, including 2012’s “Leave the Bottle,” the band pays slight homage to their roots on the recordings, but has flexed their creative muscle with an ongoing catalog of original compositions that give a nod and a wink to quintessential bluegrass subjects: murder ballads, heart break, lonely highways, and even the outlaw moonshiner.

Here, the quintet burns through a collection of songs, delighting audiences with passionate, finger-bleeding strumming, at this live performance at the 2013 Festival of the Bluegrass in Lexington, Kentucky. 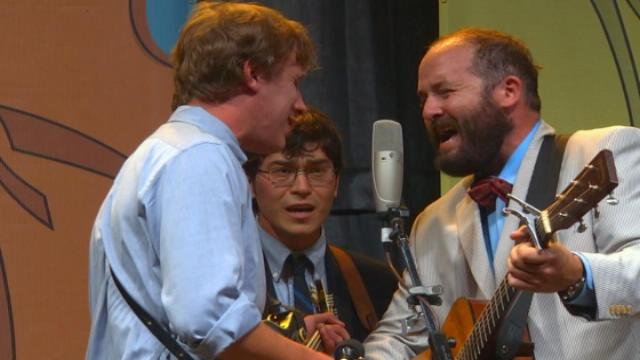