Cancer in the Commonwealth: Are We Winning the War?

Most people familiar with Kentucky’s recent history relating to population health know that year in, year out, the commonwealth ranks in the top 10 among all states in incidence rates for lung, breast, and colorectal cancer. According to statistics from the National Cancer Institute, Kentucky led the U.S. in cancer deaths per 100,000 people in 2012 with 201.2.

The causes behind Kentucky’s high ranking are numerous and complex, and have been present for decades. Still, due to persistent efforts by medical professionals to improve screening, diagnosis, and treatment methods, most cancer incidence and mortality rates in Kentucky have fallen over the past dozen years.

In this week’s Kentucky Health, host Dr. Wayne Tuckson speaks with the director of the Kentucky Cancer Registry about the advances Kentucky’s health care community has made in reducing cancer’s impact on its citizens and about the challenges that remain.

Dr. Thomas Tucker, PhD, MPH, is the associate director of cancer prevention and control at the University of Kentucky’s Markey Cancer Center. Dr. Tucker has worked at UK since 1984 and has over 40 years of experience in public health policy.

Tucker has been the director of the Kentucky Cancer Registry since 2000. The KCR collects information on all cancer patients in the commonwealth (save those who have squamous and basal cell skin cancers, which are very common and treatable). The KCR organizes the data according to rigorous, uniform criteria that are shared by all state registries. This wealth of statistical information is essential to support the innovative work doctors and researchers are doing to combat the disease.

“Over the years, [cancer registries] have become very sophisticated tools that are part of the heart of our science,” Tucker says. “It’s how we understand where we have high rates of cancer, where we have low rates of cancer, where cancer’s higher by race, by gender, by age. Without that system of gathering information on all of the cases of cancer that occur in a whole population, we could not answer those questions.

“But now, we can go much beyond that,” he adds. “We can understand variations in treatment based on [the incidence rates], variations in characteristics of people who are more likely to benefit from that treatment, [which is] something we are now calling precision medicine.”

Cancer is abnormal, uncontrolled cell division that forms tumors and often rapidly spreads from its point of origin to other sites in the body. Long one of the most devastating and confounding diseases known to mankind, cancer is the subject of 2015’s three-part PBS series “The Emperor of All Maladies.”

“Unlike a bacterial infection, which can have a specific pathogen that causes it, or a virus, cancer’s a little bit different,” Tucker says. “It’s usually a confluence of multiple things that lead to the onset of cancer.”

Tucker notes that while a person’s genetic predisposition, surrounding environment, and/or lifestyle may contain risk factors for cancer, he or she may still escape the disease during their lifespan. However, he says that combining risk factors vastly increases one’s chances of eventually contracting cancer. He also points out that lifestyle traits such as obesity and especially smoking are the main contributors to Kentucky’s high cancer incidence rates. These rates disproportionately affect two particular demographics in the state.

“In Kentucky, we have two very vulnerable populations,” he says. “The first is the African-American population, and there are very specific cancers that this relates to. … We also see very high, in fact extraordinarily high rates [among] the Eastern Appalachian population in the state. So it does vary considerably by both characteristics of race and place.”

A pie chart breaks down four specific types of cancer incidence in Kentucky from 2008-2012 that combine to total 42 percent of all cancers in the commonwealth among both genders of all races: Lung (19 percent); female breast (12 percent); colorectal (10 percent); and cervical (1 percent). “The reasons these cancers are important,” Tucker says, “is because there are evidence-based interventions that we can use to either prevent or reduce the risk of dying from these diseases.”

The same four cancers account for 52 percent of deaths from cancer in Kentucky across the same time period and among the same population. Tucker presents a graph which correlates the close relationship between poverty levels and high school education among each of the populations in the 15 Area Development Districts in Kentucky. He says that this correlation is important in forming effective cancer prevention strategies for the state because research has shown that people who live below the poverty line and lack a high school diploma participate in lifestyle behaviors that place them at risk for certain types of cancer. They also are less likely to get preventive screening for cancer.

“We have extraordinarily high rates of lung cancer in the Appalachian area,” Tucker says. “These are probably our most challenging rates. We’re looking at areas that have 130-plus cases [of lung cancer] per 100,000 population. The rate is 60 [cases per 100,000] in the U.S. So, [here] it’s more than twice that [rate].”

Kentucky’s high incidence and mortality rates for lung cancer were recently discussed in depth on Kentucky Health by Louisville oncologists Drs. Goetz Kloecker and Jorge Rios. Dr. Tucker says researchers are also examining the ways in which exposure to environmental carcinogens such as arsenic and chromium can provide a “synergistic effect” to smokers in Eastern Kentucky, leading to even higher rates for lung cancer.

Three final graphs reveal Kentucky’s biggest success in fighting cancer so far this century. The first shows the incidence of colorectal cancer among four populations in Kentucky from 2000-2009: white men, black men, white females, and black women. All incidence rates have declined, with the most precipitous drop occurring among black women. The incidence rates for colorectal cancer among black men remain stubbornly high compared to the other three demographics.

This remarkable improvement was the result of a prevention and control program developed by several organizations, most prominently UK’s Markey Cancer Center and the James Graham Brown Cancer Center at the University of Louisville, and under the direction of Dr. Whitney Jones, MD, of Louisville. Its success in screening the statewide population for colorectal cancer (which can reveal precancerous polyps that are then removed) is reflected in the final graph. This graph shows that the mortality rate for colorectal cancer in Kentucky has dropped from 24.6 percent in 2002 to 16.5 percent in 2012. This is the largest percentage decrease of colorectal cancer mortality in the U.S. over the time period, according to Tucker.

“We have had a 25 percent decrease in the incidence of colon cancer because of the screening,” he says. “Along with that, you find earlier disease, which can be treated more effectively, and we’ve had a 30 percent decrease in mortality. That’s really a major public health success story.” 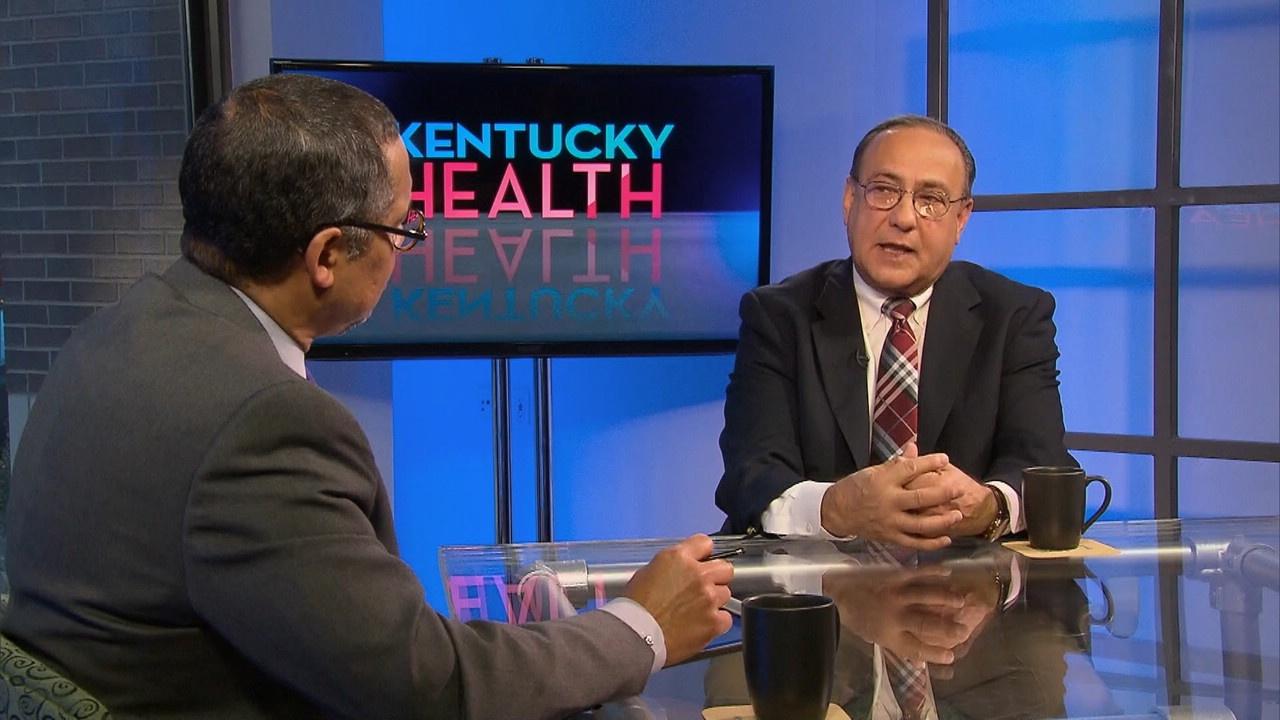