Health Ministries: Meeting the Unmet Needs at Home and Abroad

The phrase “think global, act local” has been a common call to action for organizations in all fields of service in hopes of summoning volunteer and funding efforts to address a particular social concern. In the public health field, there is no shortage of nonprofits devoted to aiding at-risk populations around the world. For one Louisville-based organization, it was a logical next step to take their initial successes providing housing, education, and health care in Latin America and apply their outreach to communities in need within the commonwealth.

In this episode of Kentucky Health, host Dr. Wayne Tuckson speaks with the CEO and a board member of the Louisville-based Hand in Hand Ministries, which has helped people in Latin America, eastern Kentucky, and Louisville gain independence and improve their quality of life and health by assisting with medical needs, housing, and education.

Marla Cautilli is the CEO of Hand in Hand, headquartered in west Louisville. Dr. Cynthia Rigby, MD is an OB-GYN and a board member of the nonprofit.

“Hand in Hand is a local nonprofit that was started back in 1999 by a priest and his brother, and it started with a trip to Jamaica,” says Cautilli. “The ordinary folks went and did some work for an orphanage there in Jamaica, and it had a profound effect on the people on that trip, looking after these kids living in poverty, and it was a way that people without a lot of money who couldn’t write a big check could do something that really made a difference for someone.”

That initial visit led to the creation of Hand in Hand, which today sends approximately 1,200 people a year on trips to Belize, Nicaragua, and eastern Kentucky. In 2017, Hand in Hand started a program in Louisville and moved their headquarters to the Portland neighborhood west of downtown as part of a revitalization project for the area.

Changing Views on Poverty, Fostering Relationships
Hand in Hand’s mission focuses on creating new volunteers and fostering a lifetime commitment to helping others and strengthening communities. “We get the volunteers involved in the work so they view poverty as a people thing, not as ‘other folks.’ We build relationships through that work, and that’s really how we do what we do, and it’s grown a lot over the years,” Cautilli says.

In the Latin American countries of Nicaragua and Belize, Hand in Hand has helped families and children rise out of poverty through housing and education programs that also strengthen public health. In Nicaragua, the primary mission is on education. Currently, the ministry is helping about 90 children receive a private school education. Their program has been in operation long enough to where now several students are in college, and one is in law school.

“In addition to going to school, we provide family counseling, meal support if needed, transportation, swimming lessons, English lessons, anything that’s going to help these kids move out of their neighborhoods where they’ve grown up, and actually have jobs as professionals,” Cautilli says.

Hand in Hand also collaborates with the Nicaraguan government to help build concrete houses as part of their education program, working alongside the future tenants in constructing the homes. Last summer, Cautilli says that she worked on building a house in Managua, the capital city, which was constructed at a higher elevation due to the city’s ground existing below sea level. Several in the tenant family, including children, had suffered with asthma when living in their former residence due to the excess moisture. Now, they will live healthier as the kids pursue their education.

Rigby became involved with Hand in Hand in 2011 after a colleague invited her on a volunteer trip. She works through the Greater Louisville Medical Society’s partnership with the ministry by offering her services to kids enrolled in the education program in Nicaragua.

“We got to visit the hospitals, we got to visit the families, we got to take care of them, we got to hear what obstacles they have,” Rigby says. “Health care is free in Nicaragua, but you have to spend a day sitting in a crowded waiting room and that means your home is not secure. So we talked about access, we talked about not having the resources to get ahead in the world, and we found out the value of education through this program, how the children in the program could actually have a chance to get out of the environment of extreme poverty and make a better life for themselves in Nicaragua.”

In Belize, Cautilli says Hand in Hand’s primary focus is on housing construction. Prospective residents in Belize sign a ten-year contract with the ministry – they own the land, but the ministry owns the house for the time span. The resident must stay involved with Hand in Hand through the duration of the contract and participate in community building, and after ten years they become the sole homeowners.

Hand in Hand also runs an HIV outreach clinic in Belize, focusing on children. Cautilli says that the country has the highest incidence rate of HIV/AIDS in central America, and that the ministry treats about 75-85 percent of all known HIV/AIDS cases in Belize involving children.

“We work alongside the ministry of health,” Cautilli explains. “They provide the ARVs (anti-retroviral drugs), we provide the nurses to make sure the kids are taking the ARVs. We’ve got money from The Global Fund that helps us with nutrition support – kids don’t want to take the meds if the meds make them feel sick, and if they get a little food in their stomach, they’ll take the meds. And so we provide care for those kids. We have an outreach center, and we start off with a pre-school daycare for kids.”

Cautilli says that their efforts have helped lessen the stigma of HIV/AIDS in Belize. This has led to more cases being identified since more people are to admit that they are afflicted, but also has led to much better treatment. “We and the ministry of health have been able to really elevate the awareness of the disease and stopping more of the mother-to-child transmission by giving the ARVs and trying to reduce that stigma about AIDS, so it’s working,” Cautilli says.

Building Outreach in Kentucky
Cautilli and Rigby are very excited about Hand in Hand’s recent expansion of services into their home city of Louisville. Rigby says that the Greater Louisville Medical Society is committed to supporting Hand in Hand through its missions committee. The GLMS also supports a variety of other nonprofits and funds medical scholarships, and many of Louisville’s medical service organizations use the Supplies Over Seas redistribution center. Supplies Over Seas started through the GLMS but is now independent, and assists many medical providers who do charity work abroad by supplying them with equipment that is left over from hospitals and clinics.

Rigby says that the GLMS has broadened its vision of service in recognition of the fact that improving public health means much more than just practicing medicine. “Over the past couple of years, the mission committee has grown – we’ve become a clearinghouse for organizations in the community who are looking to improve the overall health in the community, not necessarily in providing health care, but in involving physicians as advisors and participants,” she says.

To that end, Rigby and Cautilli have been involved in helping Hand in Hand help build up the Portland neighborhood in the aftermath of the ministry’s recent relocation there, in a similar fashion to the way Hand in Hand has helped to improve the quality of life in neighborhoods in Belize City and Managua.

“We made a commitment to try and make the entire city part of Louisville. Some neighborhoods are forgotten,” Rigby says. “So we’ve partnered with the city and mayor with some of the cleanup operations. We’ve got a space now in the headquarters that can be used for outreach. There’s an immersion project going on where groups come in and do neighborhood projects partnering with some of the other organizations.”

Cautilli reflects on a recent visit from a group who spent the weekend at Hand in Hand’s new headquarters in Portland. They worked with a family who had a bedroom closet with full mirror doors that had broken, posing a health hazard. The group replaced the mirrors and painted the bedroom, and then did a driving tour around west Louisville. They visited with another volunteer group who had just returned from Houston aiding hurricane relief, and attended a local church.

“We’re all a part of one community, one Louisville, and so what we hope to do is to bring people who may not normally go to Portland to come and see what is going on in the neighborhood and feel a part of it – to understand the challenges but also recognize that human beings are living there,” Cautilli says. “And that’s what we try and do everywhere we go.”

Hand in Hand’s ministry work in Eastern Kentucky is just as ambitious. The organization helps replace roofs, builds wheelchair accessible ramps, and operates an emergency food pantry that serves 30-40 families per month, Cautilli says. Recently, a group of students from Seneca High School organized a dental drive and collected toothbrushes, floss, and other supplies; they brought those supplies down to eastern Kentucky and distributed them at the food pantry. 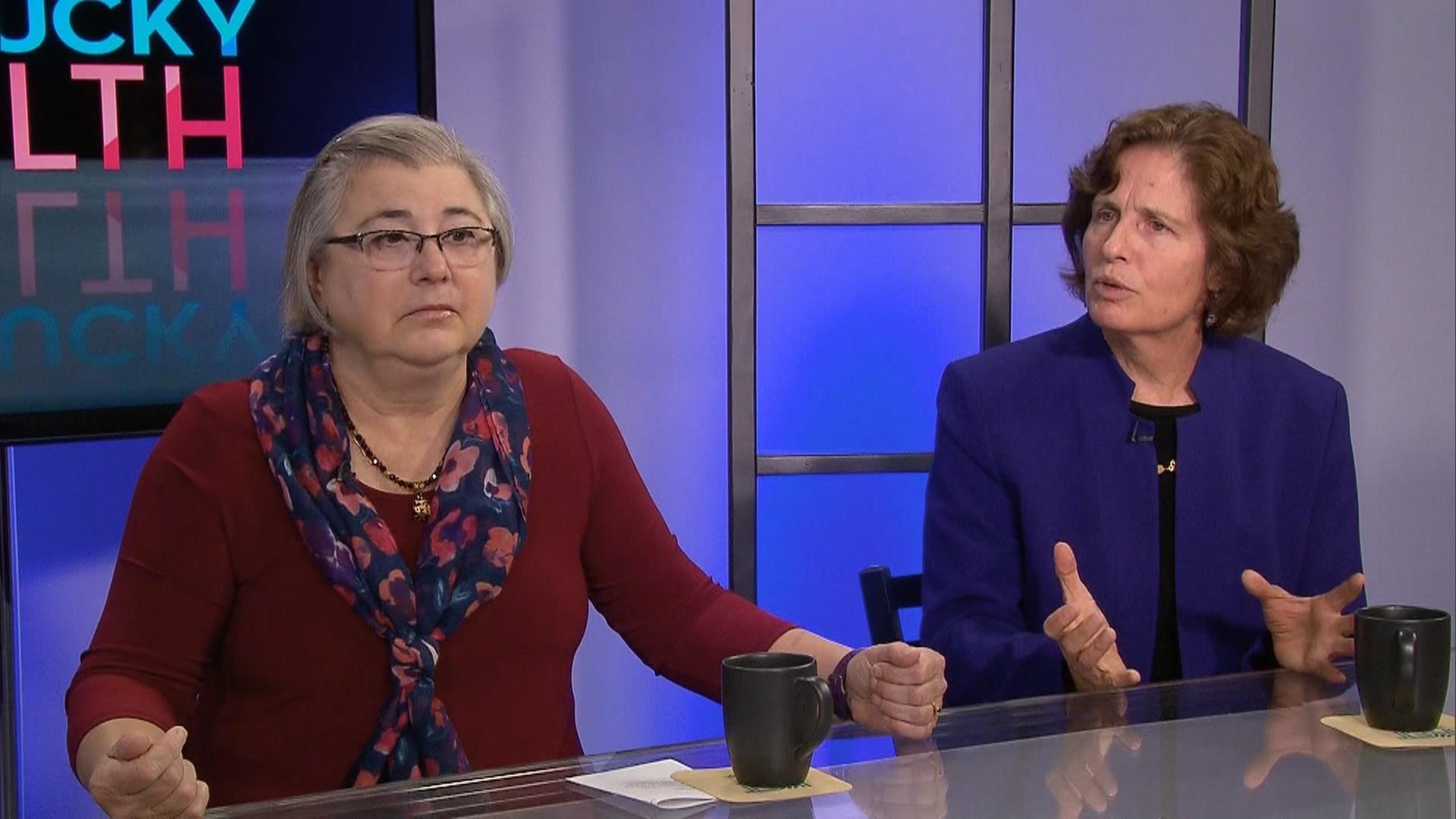