Though lung cancer remains the leading cause of death from cancer in the United States, there is cause for optimism. Dr. Tuckson talks to Jason Chesney, M.D., director of the UofL Health-Brown Cancer Center in Louisville, about new developments in the treatment of lung cancer.
Season 17 Episode 2 Length 26:55 Premiere: 10/10/21

Fighting to Prevent and Treat a Devastating Disease

Lung cancer for many years had very high mortality rates if diagnosed in late stages. It remains ranked No. 1 in cancer deaths per year in the U.S., accounting for roughly a third of cancer deaths, equating to about 200,000 people.

However, mortality rates have decreased by over 6% since 2005, according to data compiled by the American Lung Association. Several factors have played a role in this encouraging trend: fewer and fewer Americans are smoking, more Americans are getting screened early for the disease, and new and effective treatments have been developed.

“The treatments are very different,” he adds. “With small cell lung cancer, you have to treat it with chemotherapy very aggressively early on, and with non-small cell it’s okay to use less toxic chemotherapy.”

A history of heavy smoking is the number one risk factor for lung cancer, but Chesney notes that non-smokers can also get the disease. “If you think about what’s going on, you’ve got cells that line your lung that are constantly being exposed to carcinogens,” he says. “Every breath we take, we have the potential to breathe in carcinogens, which is why about one in six lung cancer patients have never smoked a cigarette.”

Another risk factor for developing lung cancer is radon exposure, Chesney says. This odorless gas is a by-product of radium, which is found naturally in rock and soil. When radium breaks down, it forms radon gas that then can enter living spaces through cracks in a foundation or an opening from a basement or crawl space. A high concentration of radon gas has been proven to cause cancer if inhaled over an extended period of time, Chesney explains.

“There are radon abatement programs, and I encourage all of my patients to get their basements checked,” Chesney says. The cost to remove radon from a home is expensive – around $1,500 – but worth it, he adds. “Every little thing you can do to prevent (lung cancer), you should do.”

Chesney says that most lung cancer diagnoses occur when patients are visiting the doctor to seek treatment for another health issue. “The vast majority of (patients with initial diagnoses) are not symptomatic, and those are the ones that do the best,” he explains. “There is also a population of patients who get low-dose CT screening. If you are a heavy smoker, I highly encourage this. If you’re a non-smoker, it’s not a bad idea.”

These annual preventive CT scans of the lungs, given at a very low dose, are becoming more commonplace, Chesney says. The scans pick up small lesions that can be biopsied. “I think it’s very important to note that virtually every type of cancer, if it’s caught early, is curable – meaning normal life span,” he says. “And so, as we get more aggressive with the screening, with diagnostic imaging, I think we’re going to drop the death rate, which is the ultimate goal of the Brown Cancer Center.”

To that point, Chesney says that several other preventive tests for lung cancer, including a blood screening, are in clinical trials and hold great promise. He notes that UofL Health is participating in a large, multi-center national study to detect cancerous cells in the blood of healthy individuals – if any cancerous cells are detected the blood, patients participating in the trial are administered a free PET scan.

“This is real, it’s happening, and I believe that in the next five years that when you go see your primary care physician, they’re going to be doing this test,” Chesney says.

The Promise of Immunotherapy

The blood test trial UofL Health is participating in connects to what Chesney views as the most exciting field of research into cancer, one that may lead soon to major advances in treatment: immunotherapy. He explains that recent breakthroughs in discovering the genetic properties of cancer cells have allowed oncologists to formulate drugs that target and attack the specific DNA mutations by summoning the immune system’s response to foreign invaders.

“There’s going to be a time in the future where we don’t care if the cancer came from the lung, colon, breast, prostate, or melanoma, what we care about is what mutations the cancer has and what the immuno-phenotype is,” he says. “That will dictate what type of treatment we provide.”

Chesney describes the differences between the three leading drug therapies for lung cancer: chemotherapy, targeted therapy, and immunotherapy. He says that chemotherapy, which has been used to treat cancer for over 65 years, targets rapidly dividing cancer cells and damages their DNA when they do split. Targeted therapy, he explains, seeks out specific proteins in a cancer cell and suppresses them.

“The way immunotherapy works is by activating your immune system – and by that I mean T-cells, the same T-cells that go after SARS COVID-2 infected cells or cells from the common cold or herpes simplex virus 1 – those T-cells are actually being activated to go after the cancer cell and kill it,” Chesney explains.

All three of the approaches have side effects, but there are big differences. “Chemotherapy is much more difficult for a patient to handle, typically, because it’s much less specific,” Chesney says. “I said that targeted agents go after one protein, but chemotherapy goes after DNA. All of the cells in your stomach and colon and small intestine are dividing, and that’s why patients get nausea and loose stools, we’re damaging all of those cells.”

As for immunotherapy, Chesney says that the main side effects occur when the T-cells marshaled to attack cancer cells instead strike normal cells in the body, similar to an autoimmune disease. “It happens, depending on the drug, in about 5 percent of patients, and they need to be managed when it happens because it’s serious; people can die,” he cautions.

Chesney says that breakthroughs in immunological research have led to exciting new approaches to treating cancer. Oncologists have found that cancer cells are able to delete a specific targeting protein on their surface that T-cells use to recognize mutations, and have engineered drugs to reverse that deletion and thus enable the T-cells to work.

In addition, during the 2000s researchers discovered that T-cells have specific proteins that, as Chesney says, serve as “off switches” or “brakes,” which block them from attacking certain types of cells, including cancer cells. Drugs were developed from this research to release the brakes and treat a growing number of cancers, Chesney says, and new discoveries are ongoing.

“We’ve had a 30 percent reduction in the cancer death rate in the past 30 years, and we believe that in the next five years we’ll have [another] 30 percent reduction,” he says. “We’re already seeing it. We’ll be reporting it in the next five years, but we’re seeing it. People are not dying of cancer like they used to because they’re getting aggressive immunotherapy drugs today.”

Chesney is optimistic enough to state that he believes lung cancer will become a chronic disease that people manage for a normal life span within the next five years. “I believe that targeted therapies will be less important than immunotherapies” in making this happen, he says. “We have about a 10 to 15 percent population that have actual mutations that we can use targeted therapies for. The other 85 to 90 percent? That’s where the immunotherapies are going to help out. Every day that I come to work, I pinch myself – it’s a miracle happening.” 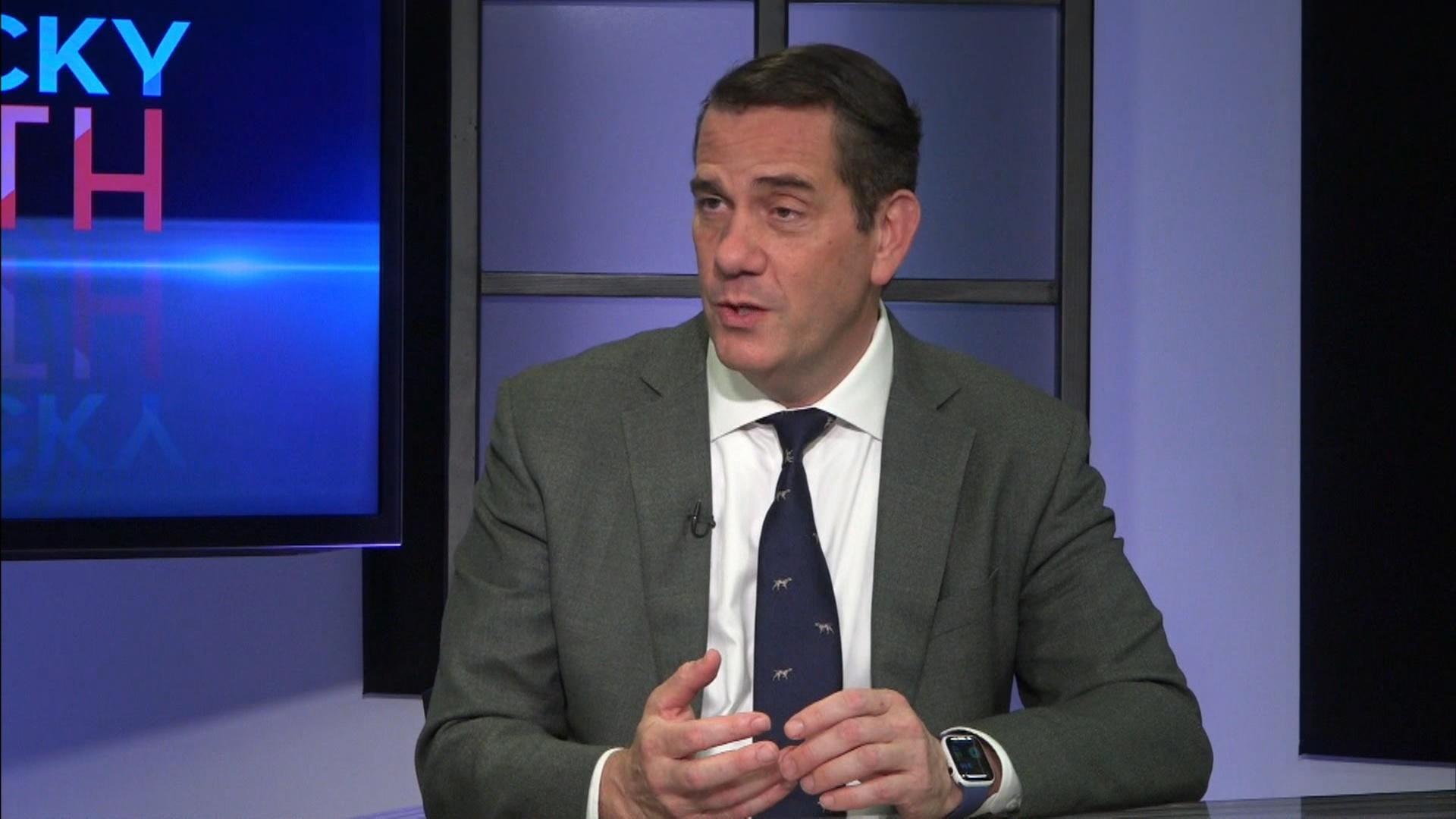