It is a depressingly familiar statistic: Kentucky ranks first in the U.S. in new cases of lung cancer per year. Not surprisingly, given Kentucky’s cultural history as a tobacco-producing state, it also ranks first in the percentage of adult smokers. Tobacco use is common for nearly one-third of all adult Kentuckians, despite several smoking bans enacted in cities and counties over the previous decade.

In this week’s Kentucky Health, host Dr. Wayne Tuckson speaks with two Louisville-based oncologists about the persistence of lung cancer in Kentucky and about advances in treatment. The guests are both members of a collaborative formed by Kentucky health care providers that aims to reverse the state’s statistical trends.

Drs. Jorge Rios and Goetz Kloecker, MDs, are both with the University of Louisville’s James Graham Brown Cancer Center and specialize in lung cancer.

They are well aware of the grave numbers associated with lung cancer – about 80 percent of those diagnosed with the disease die from it – and of Kentucky’s status as the national leader in lung cancer mortality. Dr. Tuckson notes that approximately 3,500 Kentuckians will die of lung cancer this year.

A Deadly and Often Preventable Disease

Traditionally, lung cancer – which begins as a malignant lesion in the airways – has most often been diagnosed in an advanced stage, Dr. Kloecker says. If not detected early, the lesions grow and spread, and eventually overrun the lungs and metastasize to lymph nodes and other organs.

Spreading awareness about the dangers of tobacco use is one of the transformative events in modern health care, resulting in lower smoking rates even in tobacco states like Kentucky. That being said, both doctors stress that it will take even more work to turn the tide against lung cancer in the commonwealth. Dr. Rios notes that one in every five patients diagnosed with lung cancer has either a minimal history or no history of smoking.

Furthermore, Kloecker says, “The sad truth is, even if we get rid of all the tobacco in the world right now, there will be cancer caused by tobacco for decades to come. So, there is a lot of cleaning up to do. And, unfortunately, now already half of the patients [that are] diagnosed with lung cancer did the right thing – they stopped smoking – but it caught up with them years later.”

“Any exposure to tobacco smoke will be harmful, in any way,” Rios adds, and this includes secondary smoke from nearby lit cigarettes or even what Tuckson refers to as tertiary smoke from residue on clothing or furniture.

Kloecker says that it is important to know that radon exposure is the second leading cause of lung cancer in Kentucky. This radioactive gas is released into the air from chemicals such as uranium as they decay. Its prevalence in Kentucky can be attributed in part to the state’s history of underground mining, but radon can also be present in house basements. Kloecker advises homeowners to test their residences for radon.

Lung cancer’s correlation with smoking and its high mortality rate have given the disease a stigma that makes treatment even more difficult, Rios says: “There is a nihilism, a preconceived notion that this was a self-inflicted disease, and therefore, it is sort of like a punishment that you might have, and that affects certainly the odds of benefiting from any therapy that is available.”

Despite this fatalistic outlook, Kloecker and Rios note that treatment options continue to improve for patients, even those with advanced-stage lung cancer. And more effective screening programs have enabled oncologists to diagnose more lung cancer patients when their disease is in its early stages.

In the program, Kloecker displays a series of low-dose radiation CT scan slides of patients’ lungs, showing various stages of cancer. These low-dose CT scans provide highly detailed pictures of the lungs and are now widely used as effective early screening instruments, he says. They are recommended for patients with any smoking history, even if they quit years ago.

Patients who are diagnosed with early-stage lung cancer (shown in the first CT scan slide as a small, hazy “ground-glass lesion” isolated in the lung) can often be effectively treated and have a good long-term prognosis, Kloecker says.

Even for those with stage 3 or 4 lung cancer, treatment methods can prolong life, Kloecker adds. He shows a slide of a patient with stage 4 lung cancer that had spread throughout both lungs. This patient was treated with targeted therapy, which kills cells that possess certain genetic defects. The patient was given a pill that targeted the EGRF (epidermal growth factor receptor) mutation, and the cancer went into remission.

Targeted therapy and immunotherapy (discussed below) represent the next generation of treatments for advanced-stage lung cancer. Still, given that only 15 to 20 percent of lung cancers are detected at stage 1 or 2, Rios and Kloecker believe that establishing a comprehensive early screening program is the best way to fight the disease in Kentucky.

Lung cancer screenings at certified centers are covered under the Affordable Care Act, Rios says. The screenings must be paid for by insurance companies if a patient is determined to be a member of the at-risk population.

“There is a revolution in the way we will attack cancer in the future,” Kloecker says, “where we stimulate the body’s own immune system to fight the cancer.”

Kloecker’s final before-and-after slides show a patient with a single large lesion that was treated with an immunotherapy drug just approved by the Food and Drug Administration this year. The patient, who had undergone prior chemotherapy without success, responded well to the new treatment.

Kloecker says that “the good thing with immunotherapy is, the remissions can last for a very, very long time – so the survival rate will also be much longer.” Rios adds that the side effects from immunotherapy are usually far less invasive than those associated with chemotherapy and can be well tolerated by most patients.

Innovative new treatments such as immunotherapy will not have a lasting impact unless both the public and the medical community are fully educated about lung cancer, Kloecker says. He notes that Rios recently presented a research paper at the World Lung Cancer Conference which found that about 20 percent of stage 4 lung cancer patients never see an oncologist to receive treatment. Those are the sort of statistics that brought together medical professionals from all areas of the commonwealth to form the Kentucky LEADS Collaborative, which both Drs. Kloecker and Rios participate in.

The Kentucky LEADS Collaborative is funded by a grant from the Bristol-Myers Squibb Foundation. Its partners are headed by the University of Louisville, the University of Kentucky, the Lung Cancer Alliance, and the Kentucky Cancer Consortium, and individual participants include physicians, psychiatrists, educators, and project managers. The collaborative’s mission can be divided into three broad areas of emphasis making up the middle acronym: Lung cancer Education and Awareness, Detection, and Survivorship.

Rios and Kloecker are excited about the progress they’ve already made with Kentucky LEADS. The collaborative has already conducted research that has disproved certain stereotypes about Kentucky’s population and its relationship to lung cancer, Rios says, including ones that linked poverty and lack of education to high mortality rates. These findings will help physicians refine their approaches to screening for and treating lung cancer, and Rios believes that enlisting primary care physicians in the fight will be essential going forward.

“I like to think of the primary care physician as the quarterback of the team; they are the ones who have the wide vision as to what’s going on in the field,” he says. “What we’re trying to do, is we’re trying to provide the tools that they need to take better care [of their patients] in terms of lung screening, in terms of smoking cessation tools, in terms of more up-to-date information about the novelties in lung cancer therapy, so they can help their patients make educated decisions.” 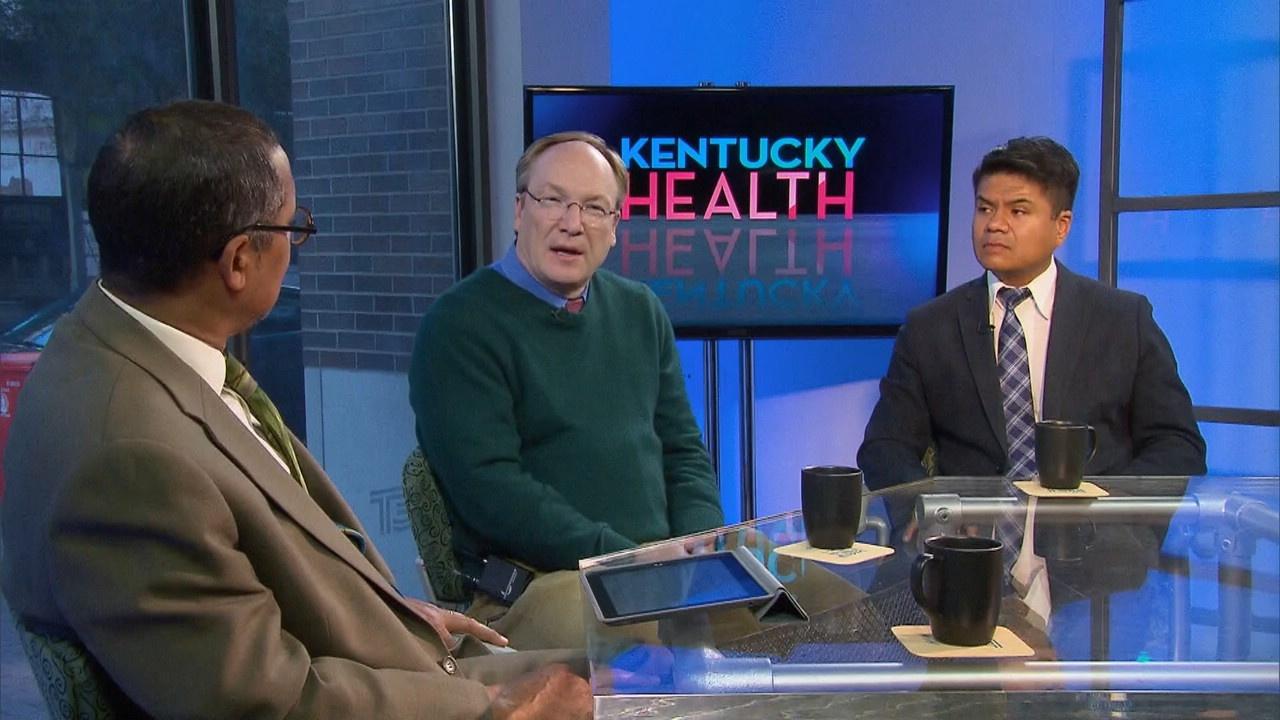