Dr. Neal Moser, a pulmonologist and president of the Kentucky Medical Association, discusses the most common threats to our lungs and the best ways to protect them.
Season 17 Episode 9 Length 27:36 Premiere: 12/12/21

On this episode of Kentucky Health, host Dr. Wayne Tuckson speaks with Dr. Neal Moser, a pulmonologist and the president of the Kentucky Medical Association, about the burden of lung cancer, COPD (chronic obstructive pulmonary disease), asthma, and other respiratory diseases in Kentucky.

High Rankings for the Commonwealth in Lung Disease

“We have very, very poor lung health in Kentucky,” says Moser. The primary cause? “Number one, two and three, it’s tobacco.”

Moser recalls that in the 1960s, the surgeon general finally announced that using tobacco was bad for personal health. This contradicted messaging from just a decade earlier, when physicians appeared in 1950s ads touting the health benefits of smoking. “We’ve now had 50 or 60 years or so where the message has continued that anything you inhale that isn’t oxygen or air is probably going to damage your lungs,” he reflects.

Still, Moser says that the advice has yet to fully take hold in the commonwealth, which has a long economic and cultural connection to tobacco. “We probably have the tobacco smoking rate as low as it’s going to get,” he reasons. “We’ll continue to strive to educate, and hopefully we’ll whittle it down. … We’d love to get it down to 5 to 7 percent (smokers), but there are just some folks that will not quit. Medical literacy is a problem.”

In addition to tobacco use, Moser cites environmental factors behind the high rates of lung disease, such as using a coal-burning or wood-burning stove, and he adds that there are also some genetic factors, particularly among persons of Scotch-Irish descent in eastern Kentucky. “The epicenter for lung cancer rates in the United States is actually Flatwoods, Kentucky,” he says.

Once a person quits smoking, Moser says that they will quickly recover a small amount of lung function, and eventually they will experience a decline in capacity equal to a non-smoker as they age. “The slope of the curve is probably three times faster for those people who continue to smoke compared with those who do not,” he explains.

Areas with high industrial zones tend to emit more environmentally hazardous particulate matter, Moser says, and that drives up higher rates of emphysema and asthma in the surrounding community. He recalls working in Louisville years ago on efforts to mitigate the environmental pollution spewed by coal-fired power plants in the west end of the city, which has a predominantly African American population. Moser also notes that while black lung disease still exists in Kentucky, its incidence is far lower than in the 20th century, primarily due to the coal industry’s adoption of automation for mineral extraction.

Moser says that many of the people who have COPD are also at higher risk of developing lung cancer. “Asthma is a little bit different,” he adds. “Asthma, most of the time more of an organic, inhaled antigen or irritant is causing it. It might be dust in the home, it might be mites, it might be cockroach excretions in the inner cities.”

As the acting president of the KMA during 2021-22, Moser focuses on public health and crafting policies and campaigns designed to reach the entire population. As a practicing pulmonologist, however, he treats each patient individually and will give them advice based on their unique profile and risk factors. He relates an experience with a patient he had just prior to the show’s taping, where he reconnected with a lady with severe asthma who had not been in his clinic for several years and was referred by her family. “With her, it’s her parakeets – it’s her birds,” he says. “She is going to be so sad if I find out that the birds are the cause, because she loves them. But more than likely, the birds are causing her bad asthma.”

Moser also explains that people in Kentucky are at a higher risk of contracting histoplasmosis, a lung infection also known as Ohio River Valley Disease. This infection is caused by inhaling fungal spores found in bird and bat droppings, and it can be spotted by identifying nodules on the lungs through X-ray imaging.

Preventing and Treating Lung Disease, and the Impact of COVID-19

“Treatment for emphysema is really symptomatic,” Moser says. “Once you’ve damaged your lungs, once you’ve destroyed them with tobacco smoke or industrial smoke, they’re already damaged, they won’t come back.” That means that it’s very important to identify lung damage early and motivate the patient to cease exposing their lungs to the irritant, whether it be tobacco smoke or an environmental pollutant.

Rehabilitation for patients with chronic lung disease is a collective endeavor, Moser says, enlisting physical and occupational therapists, nutritionists, and wellness coaches. They teach patients energy conservation techniques and how to use medications (and bronchodilators for those with asthma). “All of these concepts are taught to the patients so they can get some autonomy and learn how to deal with (their disease),” he explains.

“The hardest part about rehab – these folks, we’ve been taking care of them a long time,” Moser says. “So the staff, myself included, tend to bond with them, and they improve, but (their disease) does continue to progress. So, there’s a decision at some point to talk about end of life. … We are getting better at it, but it’s very, very hard.”

For some patients, a lung transplant is an option, Moser explains. That is a major surgery that usually has a good outcome, but it’s only performed on persons who have developed emphysema or COPD relatively early in their lifespan and have no other organ damage.

The COVID-19 pandemic is still ongoing as of fall 2021, and Moser notes that roughly 1 percent of unvaccinated patients are still dying of the viral disease, despite improvements in treatment. The disease causes inflammation in the lungs: “They turn into a wet, soggy sponge that just will not process oxygen,” Moser explains. For patients with extreme COVID, placing them on a mechanical ventilator that provides extracorporeal membrane oxygenation (ECMO) is required. Lung damage “happens very quickly, and it’s very difficult to predict,” he says.

The impact of COVID-19 on patients is far worse if they have a pre-existing lung condition, Moser says. When his regular patients are stricken with COVID, Moser says that their mortality rate skyrockets – up to 20 percent. Furthermore, some of his patients who do survive the initial COVID infection end up developing long-term pulmonary complications from the virus. “You know, we’re 18 months into this now, and from a breathing point of view the patients have just not recovered,” he says. “They have a persistent cough and are more short of breath, and we’ll evaluate them.”

After Moser was installed as president of the KMA in late August 2021, he selected lung health as the association’s area of emphasis for his term. The KMA’s Breathe Better Kentucky initiative is a partnership with the Foundation for a Healthy Kentucky and Anthem and will include several programs on KET airing in early 2022. “Lung health is still probably the greatest health problem in Kentucky that is preventable,” he says. “We’ve been very, very busy with COVID, but we have to remember that these other health issues still exist.”

Breathe Better Kentucky will promote tobacco cessation, lung cancer screening, and other methods designed to help Kentuckians improve their respiratory health, Moser says. “We’ve made some really great progress with cancer screening in smokers in order to catch their cancer at an earlier stage,” he explains. “If we can catch lung cancer at stage 1, your success and survival is going to be at 90 percent or better.”

Moser says that preventive low-dose CT scans for lung cancer are covered by insurance and are recommended for persons between the ages of 55 to 77 who have smoked one pack a day for at least 15 years; even if they have quit, there is a time frame going back 15 years that qualifies them for screening. “It’s amazing the amount that we’ve picked up early, and our thoracic surgeons are thrilled that they’re able to provide some cures,” Moser says.

For his take-home points, Moser instructs viewers to pay attention to their respiratory health and to consult with their primary care doctor if they experience persistent shortness of breath. And he reemphasizes the need for people to quit smoking. “We’ll do everything we can to get you off inhaling tobacco smoke,” he says. “Because that is, without a doubt, number one, two and three.” 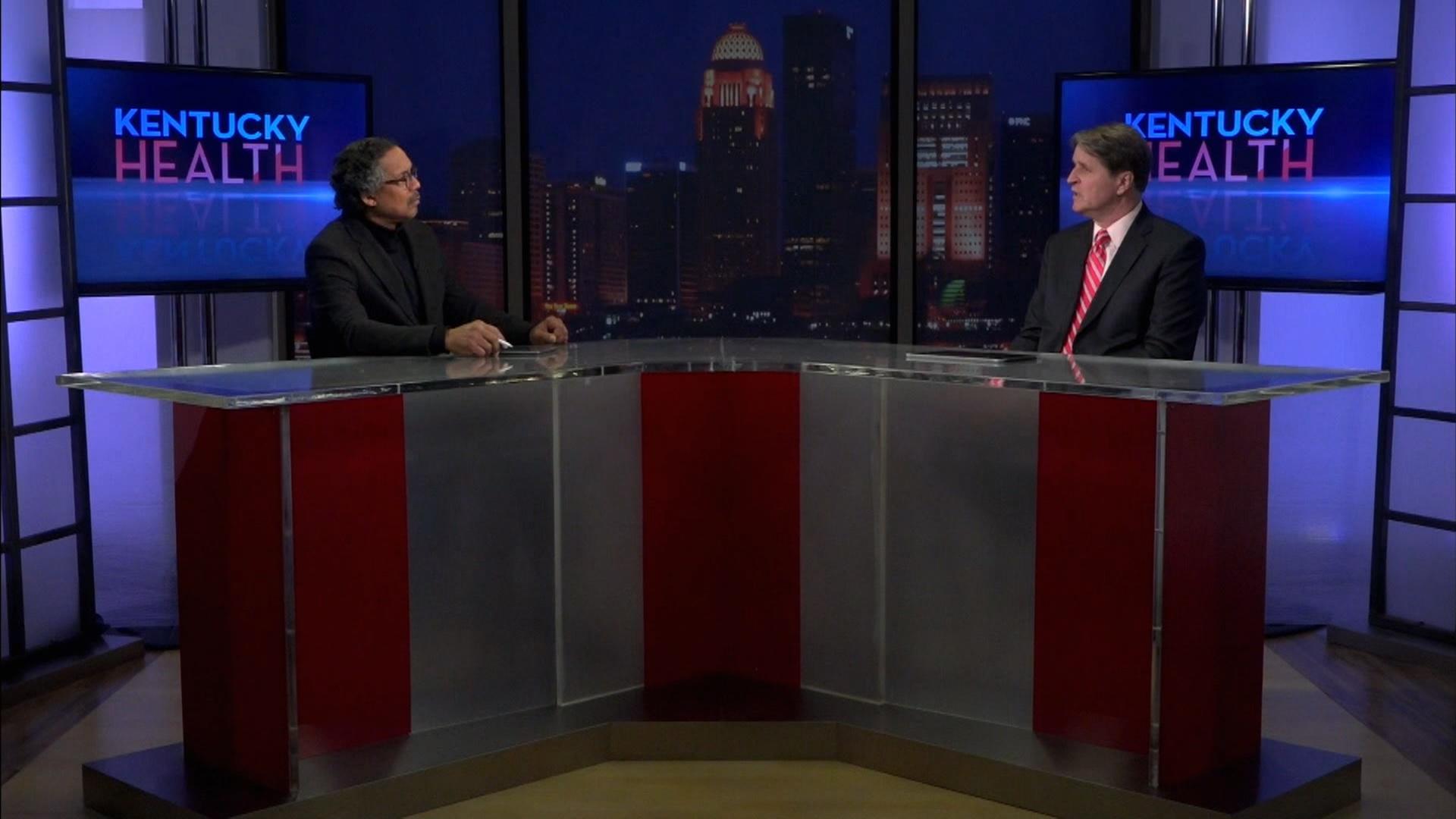