Diagnosing and Treating a Common Cause of Hearing Loss in Children

On this episode of Kentucky Health, host Dr. Wayne Tuckson welcomes Dr. Swapna Kartha Chandran, MD, an otolaryngologist with UofL Health, who discusses the causes and treatment of recurrent otitis media – commonly known as an ear infection. She discusses how adults are affected but primarily focuses on otitis media’s impact on early hearing and learning in children.

Otolaryngologists are usually referred to as ear, nose, and throat specialists (ENTs) by their patients. Dr. Chandran says that it’s very important for parents of young children to not overlook testing their child’s hearing when going to regular checkups, as otitis media is more common in children than adults.

Otitis media, Chandran says, is an infection of the middle ear space. “With the ear itself, you’ve got your ear canal where the sound comes in, and that’s where everyone puts their Q-tip or their finger to scratch their ear,” she says. “At the end of that canal is an eardrum, and behind that eardrum is where the otitis media occurs.”

The pediatrician or ENT should be able notice otitis media immediately when shining an otoscope (light probe) into the ear and examining it, as a fluid collection will be visible behind the eardrum, Chandran says. Sometimes the fluid may not be infected – it may just be mucus – but it still needs to be removed, she adds. When it is otitis media, she says that it can be caused by a bacterial or viral infection, with the latter more common.

“You’ll see a child running around with an upper respiratory infection or cold, and the cold goes into the ear because there’s a tube which connects the ear to the nose,” she explains. “Sometimes you’ll get reflux of that, or inflammation in that tube that causes otitis media.”

Children are predisposed to getting otitis media for multiple reasons, according to Chandran. “Number one: their immune system is not as developed as adults – they’re developing their immune system, so that’s why they get more colds in general,” she says. In addition, children’s faces are smaller, which means that the connecting tube between nose and inner ear – called an eustachian tube – is not positioned well to drain fluid.

As children grow into adolescence and their heads increase in size, the eustachian tube’s position becomes more gravity-dependent, Chandran explains, improving drainage. “It’s made of cartilage and muscle, and so as that cartilage and muscle matures, as our face grows, as our immune system gets more robust, we see that we get less ear infections,” she says.

Chandran says that pediatricians usually don’t see inner ear infections in children until they reach six months of age. When it does appear after that point, most children present with symptoms such as fever, irritability, poor ability to sleep or eat, and tugging on their ears.

“The pediatrician takes a look, and will often see kind of a bulging eardrum because of the fluid, or maybe a red eardrum, and then sometimes behind that eardrum they’re noticing a white fluid or just a general thick fluid that would indicate an ear infection,” Chandran says. “Children are really fussy because that ear space is filled with fluid pushing against that eardrum, and that eardrum is then experiencing pain.”

It's important that parents keep regular ear exam appointments for their young children, Chandran says, because if left untreated, repeated long-term ear infections can lead to hearing loss. This can also occur if fluid builds up behind the eardrum and is not drained – even if there’s no associated infection, she adds. When a child experiences permanent hearing loss at an early age, this in turn can affect speech development.

“From the get-go, we want to make sure children are hearing well, and that’s why we give the newborn hearing screen to begin with,” Chandran says. This screen is given before the infant leaves the hospital.

Treatment Methods for Otitis Media and Other Forms of Hearing Loss

While Chandran says that having one ear infection develop for a child does not mean that more will occur, some children do have multiple ear infections, and those kids make up the majority of her patients. Some of them have not been treated and may present with speech issues.

“Everyone’s saying, ‘We can’t understand what (the child) is saying,’ or ‘They’re not really saying as much as big sister is saying at this age – why is that?’” Chandran says. “So the first thing I try to evaluate is their hearing – is it affecting their speech development?” She will order a pediatric-trained audiologist to give the child a hearing test, and then consult with the parents about next steps if an infection or fluid buildup is found.

Children who have recurring ear infections may be fitted with an ear tube to equalize pressure and improve drainage, Chandran says. The ENT will first make a small incision in the eardrum and then, using a microscope, insert the tubes from outside and fit them properly so fluid can be extracted. Guidelines have been established for ENTs and pediatricians to follow that will help them decide when it’s best to insert ear tubes, and they recommend inserting them if a child has either three ear infections in six months or four in 12 months.

“There also are guidelines on how and when to treat the infections,” Chandran adds. She proceeds cautiously with most children when prescribing antibiotics to keep them from developing resistance. “If they seem like they’ve got a relatively uncomplicated ear infection and they’re about two years old, you wait and see,” she says, “… but if they’re not getting better after 48-72 hours and they’re showing signs of fever, irritability and pending bacterial infection, then you would go on to kind of a baseline antibiotic, and you can escalate from there.”

Inserted ear tubes are not permanent, Chandran says, but rather a short-term solution to pain, fluid buildup and pressure that can be removed once a child matures and their facial structure develops – around age 5. They’re typically inserted for a year, she explains, and after that Chandran will reevaluate the child’s situation. If the infections have ceased and the inner ear structure is maturing smoothly, there’s no need for re-insertion.

Regarding hearing tests, Chandran says that they can be done at any age and that for newborns, the audiologist will insert a tube into the ear that emits a sound which should then be sent back by the cochlea. The cochlea is an organ in the inner ear that produces the sensation of hearing. If the infant fails the initial test another one is ordered, and if hearing loss is still detected, Chandran and her team will conduct what is called an auditory brain stem response test.

“We have a whole series of more sophisticated tests that we can administer, looking at brain waves, looking at sound waves to see what is emitted and what is received in the hearing pathway,” Chandran says. Once a child reaches age 2, however, the audiologist can give them what Chandran calls a booth test, where the toddler sits in a booth and his or her responses to various sounds are documented. “These audiologists are pretty skilled at getting even the most difficult patient to determine whether they’re hearing or not,” she says.

Adults can experience hearing loss from a variety of causes, according to Chandran, ranging from wax buildup to overuse of headphones playing music at loud volume. Hearing loss can also be caused by genetic factors or a dormant virus from childhood becoming active again, similar to the way chicken pox can lead to shingles decades later.

Viral-caused hearing loss can be reversed if treatment is started early, Chandran says, using antivirals or steroids that will reduce inflammation. Conversely, some types of hearing loss caused by genetic factors cannot be reversed, Chandran says. It’s very important to identify any genetic cause of hearing loss as early as possible, she explains, in order to plan for the future and explore the possibilities of using hearing aids or getting a cochlear implant.

“If you’re talking about an adult, if you’ve got a prolonged earache, you probably should get it evaluated,” she says. “I think more important, if you’ve got a hearing loss, and you know some decreased hearing on one side in particular, I think you really should have that evaluated, because not all hearing loss is related to a remediable ear infection – it could be something greater.” 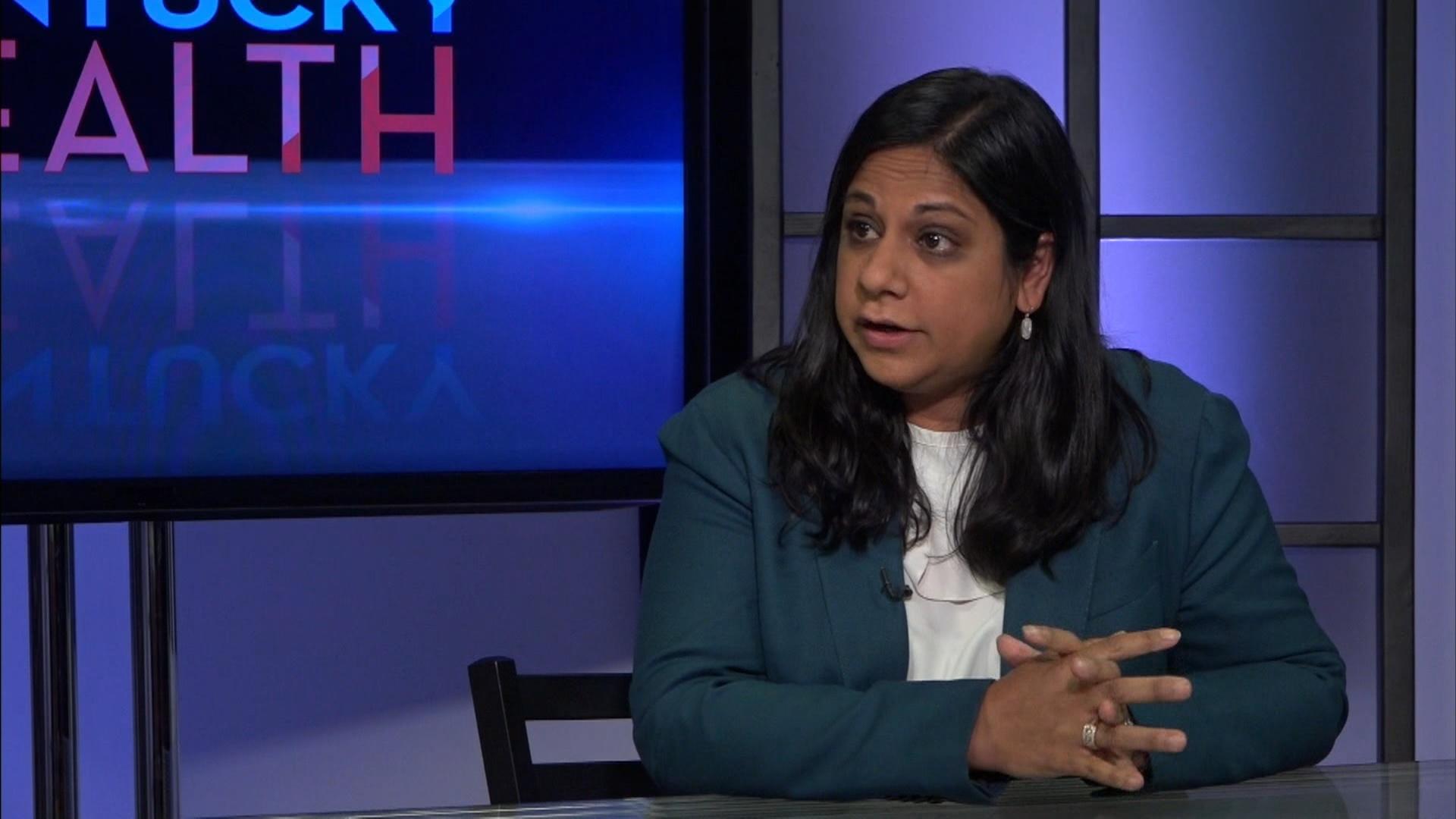