Skin Diseases: How to Spot Them and How to Treat Them

As the initial line of defense against the outside world, our skin is one of the first markers we check for signs of distress. Skin can be affected by many different things, from bacteria to chemicals to the constant exposure to sunlight. Our skin is designed to protect us and can handle many invasive elements, but problems still can occur quickly or build up over time. Fortunately, there are a lot of effective treatments for most skin diseases that enable people to recover quickly or manage chronic conditions.

In this episode of Kentucky Health, Dr. Wayne Tuckson speaks with a Louisville dermatologist to learn about the types of skin diseases, including various cancers, and in particular how to spot warning signs of serious maladies. We also learn some tips for protecting your skin against sun and the weather.

Denise Puthuff, MD, practices with Brownsboro Dermatology in Louisville. She graduated from the University of Louisville Medical School and completed a residency in dermatology at Ohio State University.

“The skin’s the largest organ of the body, and it’s the one that everybody sees, and so they know when something’s gone wrong,” Puthuff says. “Something looks different, something’s bothering them, something’s itching or hurting – then they know that they need to go see a doctor about it.”

Causes of Skin Diseases: Genetics, Environment Play a Role
Puthuff says some of the most common skin conditions are treatable, even if they are chronic. With the aid of slides, she discusses several well-known diseases:

Psoriasis: This inflammatory skin disease is hereditary and manifests itself in a scaly red rash that can be aggravated by lifestyle or environmental factors.

“People ask me all the time, ‘Does stress make this worse?’” Puthuff relates. “I say, I don’t know anything that stress makes better, and skin diseases in particular are made worse by stress. Infections anywhere in your body can cause psoriasis to flare up. There are all kinds of reasons that people get psoriasis.”

Treatment is with topical steroids, and if the psoriasis spreads over a large portion of the body, there are new drugs called biologic agents on the market that are very effective, although expensive. These drugs are “really great for the dermatology community because we’ve had all these patients for years that we couldn’t do much for, but now they can lead normal lives, and they’re so happy because their skin’s clear,” Puthuff says.

Rosacea: Bright red inflammation of the skin on the face, often with blisters, that is often referred to as “adult acne” and is stereotypically (and wrongly) associated with alcoholism. Puthuff says that rosacea is not acne but results when blood vessels in the face leak inflammatory molecules into the skin. Rosacea can be aggravated by drinking alcohol, but not caused by it. Stress and certain foods can also cause flare-ups. Puthuff says that there are effective topical ointments and medicines for rosacea.

Impetigo: This skin rash with bumps is the result of a bacterial infection. A different form, called bullous impetigo, displays in larger, more discrete lesions. Puthuff says that impetigo is seen most often in children and people with suppressed immune systems. It is infectious but easily treatable with antibiotics, and goes away in a few weeks at most.

Abscesses: These collections of pus can be caused by a variety of bacterial infections, and Puthuff says that she always checks first for methicillin-resistant Staphylococcus aureus, a bacterium that is resistant to most antibiotics. She adds that MRSA infections are becoming more common in the general public, where they formerly were usually confined to hospitals and nursing homes. When Puthuff and her staff identify MRSA, they know that they must prescribe one of the few existing antibiotics that will treat the infection and the abscess.

Shingles: This infectious disease is caused by the same virus that causes chickenpox. People who have chickenpox as children are susceptible to getting shingles later on.

“Shingles usually come out along the distribution of one nerve, or dermatome, and first you get pain, and you don’t know why you have this pain,” Puthuff says. “Then they get these little blisters popping up in a linear type of fashion, and it tends to be quite painful and irritating. It can last several weeks, and cause a lot of nerve irritation, and afterwards, you can have pain even after all of the skin lesions are gone.”

If you think you have shingles, it’s best to call your doctor immediately, Puthuff advises. There are medications that are effective in treating the disease, and it’s best to begin using them as soon as possible.

Cancers: Basal-Cell Carcinoma and Melanoma
There are several different types of skin cancer, the most common being basal-cell carcinoma, and the most serious melanoma. Puthuff says basal-cell carcinoma is the most common form of cancer in the U.S. overall, and is usually first seen as an elevated blister or lesion that may bleed. This cancer affects the outer layer of the skin and is usually the result of prolonged sun exposure.

Puthuff reflects on how many of her older patients grew up in a time when there was a lack of education on the risks of sun exposure and says she can recall her mother telling her to “go outside and get some sun on you.” While there are healthy benefits to being out in the sun, such as getting Vitamin D, Puthuff says people can get the same from a dietary supplement, without the risks.

Treatment for basal-cell carcinoma is almost always surgery, with radiation and medication also options for some patients. “Statistically, if you have a basal-cell carcinoma, you’ve got about a 50 percent chance of having a second one within two years,” Puthuff says. “And that has to do with your global sun damage. They don’t spread, per se. But you can get another one in another spot because of your global sun damage.”

Melanoma, a cancer that grows in skin pigment cells called melanocytes, is the most dangerous kind of skin cancer and is primarily caused by exposure to long-wave ultraviolet (UVA) rays from the sun. These UVA rays penetrate to the deeper layers of the skin and can, over time, cause lasting and serious damage. Puthuff says that dermatologists use the easy-to-remember acronym ABCDE to help identify melanoma and inform their patients:

A – Asymmetry, one side of the lesion does not match the other;
B – Border, which will be jagged and irregular.
C – Color, which will be different within the lesion, ranging from light brown to dark black;
D – Diameter, six millimeters or larger;
E – Evolving, changing shape over time.

“If you have some combination of those letters, on a lesion which you have on your body, that would make you suspicious that you may have a melanoma, you should see your physician immediately,” Puthuff says.

Fair-skinned people are at higher risk for melanoma, as they have less skin pigmentation, but it can occur in persons of all skin colors. People who have a lot of moles and freckles on their skin are at a higher risk, as are redheads. Excessive sun exposure during childhood is a high risk factor as well, Puthuff says. While melanoma usually appears on exposed skin areas, it can grow anywhere there are pigment-producing cells, including the lining of the brain and eye retina.

The main treatment following diagnosis is surgical excision performed to one centimeter surrounding the lesion. Puthuff says follow-up exams for patients with melanoma are mandatory every three months for the first year after surgery, then every six months for the next five years, and then either annually or bi-annually at the patient’s discretion after that.

Tips for Sun Protection and Self-Care
Puthuff advises her patients to check their skin thoroughly once a month and maintain a rigorous regimen for sun protection. She explains that while short-wave ultraviolet (UVB) rays that damage the skin’s outer layer may lessen during fall and winter, deeper-probing UVA rays are present at roughly the same levels year-round.

Sunscreen prevents both UVB and UVA rays, and Puthuff says there are many good products on the market. It should be applied at 1.5 ounces for the entire body, and re-applied every two hours – more if a person is getting in and out of water.

For those who don’t like sunscreen, Puthuff says that wearing protective clothing is a must. “I always tell my patients, you may think that you’re not getting much sun in day – ‘I’m not outside very much,’ they’ll say to me – well, if you’re outside 10 minutes unprotected, that’s over 70 minutes, over an hour a week,” she notes. “And that’s a bunch of hours a year, and you’re making deposits to your sun damage account and you’re going to start getting interest.” 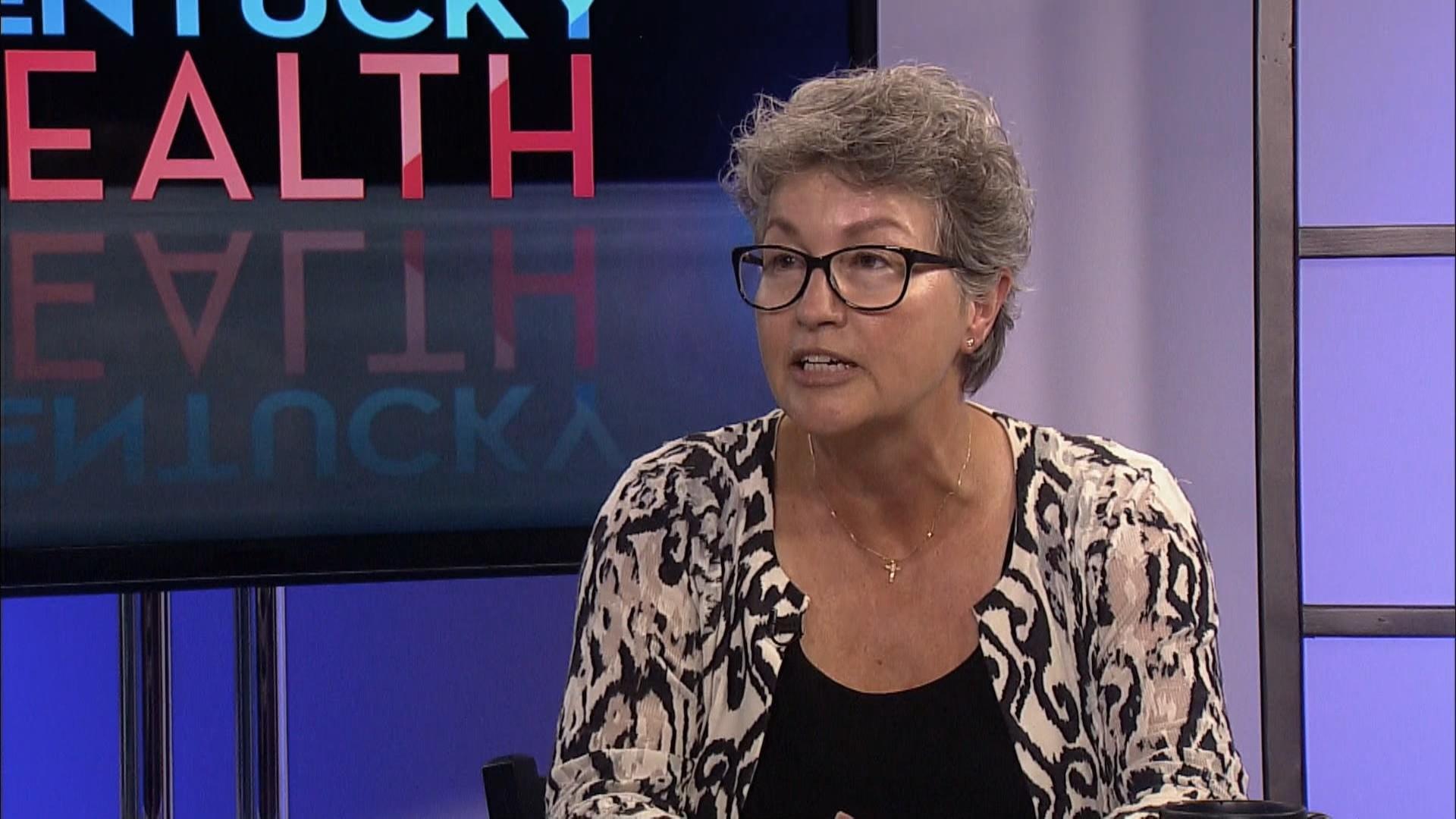