Stephen Cunanan, CEO for the American Red Cross Kentucky Region, talks about the many ways in which the Red Cross responds after disasters and other misfortunes, including the recent tornadoes in western Kentucky.
Season 17 Episode 23 Length 27:32 Premiere: 4/3/22

On this episode of Kentucky Health, host Dr. Wayne Tuckson interviews Stephen Cunanan, CEO for the American Red Cross Kentucky Region, about the many ways the organization responds after disasters and other misfortunes, including the December 2021 tornadoes in western Kentucky.

In 1881, nurse Clara Barton founded the American Red Cross. Based on a movement that originated in Switzerland, the American version of the Red Cross offers impartial aid to those suffering from war, natural disasters, or other crises.

Cunanan says the Red Cross is a complex organization that has a worldwide reach. He explains that the American chapter, headquartered in Washington, D.C., is part of the International Federation of Red Cross and Red Crescent Societies, which has 192 member countries. Within the U.S., there are 50 regional chapters, most of them corresponding to state geographies. The Kentucky chapter, based in Louisville, also serves communities across the Ohio River in southern Illinois and southern Indiana. Each chapter works in concert with others to provide assistance in a rapid, coordinated process whenever and wherever the need arises.

According to Cunanan, almost 90 cents of every dollar donated to the Red Cross goes directly to its mission. The number 90 also reflects the percentage of Red Cross workers who are volunteers.

“There are many, many opportunities to volunteer with the Red Cross,” Cunanan says. “We have a lot of folks that are disaster volunteers. They are deployed for two weeks a year. We call them up and say, ‘We need you in California, or we need you here in Kentucky, or we need you in Louisiana with the hurricanes.’”

Other volunteers work an hour at a time assisting with blood drives. Cunanan says all volunteers undergo training, the duration of which depends on what they’ll be required to do. He explains that the most sophisticated disaster volunteers may receive up to 80 hours of training before they are deployed, and biomedical volunteers may go up to 300 hours.

The Red Cross administers first aid and provides food and shelter, but those are only its most well-known services. Cunanan says volunteers also help victims process the initial shock of a tragic event and then support them as they rebuild their lives in tangible ways and on a mental and emotional level.

“There are two parts to the mental health (support),” Cunanan says. “One is community outreach. So we are literally walking house to house, with a team of people and a mental health person is on it, saying ‘How are you doing?’ They know the signs, they know the indicators where somebody may be having difficulty. And then we also have a team back at our headquarters that will go and arrange appointments for more intense issues that we have, and if we need to make referrals, we will.”

Another core part of the Red Cross’s mission, according to Cunanan, is to develop effective preventive strategies for natural disasters, violent conflicts, and other harrowing events. He says the organization has a suite of preparedness training that starts at the elementary school level, where Red Cross instructors teach kids basic measures for getting through an unforeseen, random crisis.

“We call it the Pillowcase Project,” he says. “We give (students) a pillowcase and say that this is what you need to fill up in your pillowcase, and if anything happens to you, you grab it. It contains things like a flashlight, a bottle of water, a blanket. That preparedness is very, very important.”

The Red Cross also has a Making Homes Safer program, where instructors educate the public about threats such as fires, chemicals, and misuse of appliances.

“Over the course of the last couple of years, we’ve installed about 5,000 smoke alarms in homes around Kentucky,” Cunanan says. “We have 94 confirmed saved lives through that program.”

Two other Red Cross initiatives seek to reunite families and support the armed forces. Restoring Family Links works to help recent immigrants and refugees to cities such as Louisville and Bowling Green find their closest relatives as they settle into a new country and community. Cunanan adds that Congress has authorized the Red Cross to be the official agency tasked with helping members of the military during crises.

“When people go into the armed forces, they are instructed that if anything were to happen, you call the Red Cross first,” he says.

Reflections on Helping Western Kentuckians During a Catastrophe

Two hours after tornadoes swept through several communities in Western Kentucky during the overnight hours of Dec. 10-11, Cunanan was on the ground in Mayfield, a town in the Jackson Purchase region. Many areas of the community, including its historic downtown, were utterly devastated by an EF-4 tornado.

Around midnight, Cunanan was contacted by the regional disaster officer for the Kentucky Red Cross, who informed him about the severe weather.

“About 3 or 4 a.m., I got another call from her, and she said, ‘It’s very bad – we don’t understand everything that has happened, but I think you should go (to Mayfield),’” says Cunanan. “I was on the road, and I was able to go down there and oversee some of the initial response.”

In his supervisory role, Cunanan initially coordinated relief assistance, providing shelter, food, medicine, and emergency supplies. Within about 48 hours, there were 450 Red Cross volunteers on the ground in Western Kentucky.

“It’s a very sophisticated organization,” he says. “You bring your own communications equipment, so you have the ability to have Internet conversations and telephone conversations because none of that was existing down there. You bring food, and it’s a self-sustaining operation.”

The tornado event activated an emergency response unit in every affected county, Cunanan explains. Each county has an emergency manager who calls in the Red Cross, National Guard, Kentucky State Police, and any other group that can and will provide assistance.

“Once every morning and once every afternoon there’s a meeting,” he says, “and you go and you coordinate your services. Red Cross, what are you doing, what do you see, what needs to happen? The hospitals will be there also, so you’re able to have a coordinated set of care with everybody in their lane, so there’s no duplication and everybody is getting what they need.”

Based on his experiences over the past months and many other events during his career, Cunanan reminds viewers that Kentucky is situated in a disaster-prone region that’s highly susceptible to wide-scale flooding, tornadoes, winter storms, and even earthquakes.

Cunanan encourages people to download the Red Cross disaster app from the Apple Store or Google Play, which gives subscribers warning notifications as well as safety tips. He also recommends getting a transistor radio and extra batteries, since often times cellular phone towers are damaged in major weather events.

In general, people should set aside a three-day supply of water and food, and have blankets and flashlights available, Cunanan says. Any prescription medications also need to be secured. Lastly, if possible, folks should reserve enough cash to last for several days, since many bank services may be disrupted if the local power grid goes down.

The recovery in towns like Mayfield and Dawson Springs will take years, and Cunanan says the incredible generosity shown by Kentuckians in the days and weeks after the tornadoes struck must continue.

“They can do two things. One is providing financial support, and the next is volunteering, that’s very important also,” Cunanan says.

On the other hand, he advises against donating goods such as food, clothing, and toys unless those are specifically requested. Cunanan says that folks who want to donate to or volunteer with the Red Cross can visit www.redcross.org, call 1-800-RED-CROSS, or visit their local office. 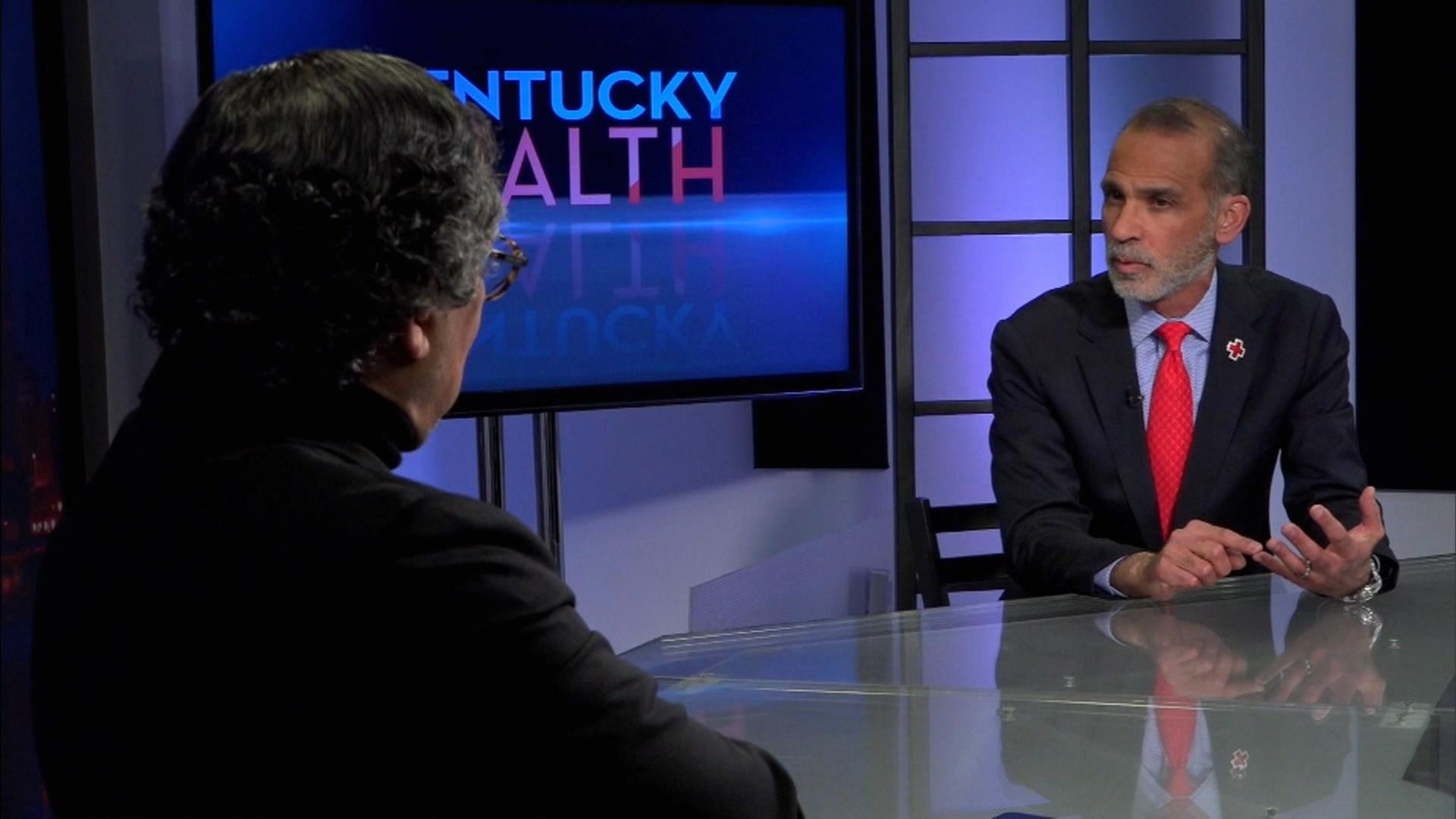