A Preview of the 2015 General Assembly

With the start of the 2015 General Assembly session just three weeks away, a group of state representatives gathered on KET’s Kentucky Tonight on Dec. 15 to discuss their legislative priorities.

The panel included Democratic lawmakers Reps. Denver Butler of Louisville and Terry Mills of Lebanon, and Republican Reps. David Floyd of Bardstown and Brad Montell of Shelbyville. Here’s a selection of the issues they explored on the program.

Charter Schools
After promoting charter school legislation for several sessions, Rep. Montell says he hopes the idea can finally pass the General Assembly. He says 43 states allow for the publicly funded, privately operated schools and Kentucky can learn valuable lessons from their experiences.

“The success of charter schools is largely tied to the law that created those charter schools and the accountability that we place on those schools,” Montell says. “We need to look at the schools that have been great successes and emulate that in Kentucky.”

“I don’t think our education should be for profit,” Butler says. “I find it very difficult to make money off of our children.”

Mills says he sees casino gambling as a possible solution to the pension problem. He supports dedicating gaming revenues to fund the retirement system.

Rep. Floyd notes that the Kentucky Teachers’ Retirement System recently proposed a bonding measure to shore up its under-funded plans. He says he usually dislikes pushing debt off onto future generations, but he does see merit to the KTRS proposal.

The Death Penalty
The Bardstown Republican says another issue he wants the legislature to revisit is capital punishment. In previous years Floyd has co-sponsored legislation to abolish the death penalty and replace it with a sentence of life without the possibility of parole. In addition to being a faith-based issue for Floyd, he says he’s concerned about mistakes that lead to death-row inmates being exonerated as well as the expense and inequitable application of death sentences.

“If we can accept a system that occasionally kills an innocent person--and I cannot--then there are many other arguments why the application of the death penalty as it currently exists in Kentucky has so many problems that it’s beyond repair,” Floyd says.

Rep. Mills also opposes the death penalty, which he calls a faith-based view consistent his pro-life stance. “The problem I have is how can you justify being pro-life at the beginning of life and then somehow change that justification and start putting conditions on it at the end of life.”

Rep. Montell says there are some offenses so heinous that the death penalty is warranted. He believes better use of technology and eyewitness testimony can avoid wrongful convictions.

Louisville Democrat Butler, who is a law enforcement veteran, says he supports capital punishment in cases where a police officer is killed. But he argues for a hold on future death penalty convictions until the state can devise a better system of checks and balances to prevent the execution of the innocent.

The Heroin Scourge
As a former Louisville Metro Police sergeant, Butler says he’s personally seen the toll of heroin on addicts, their families, and the community. He advocates for legislation to allow first responders to administer drugs to reverse the effects of a opioid overdose, as well as a Good Samaritan law that would enable addicts to call 911 for an overdose victim without fear of facing prosecution themselves.

“It’s not one bill that’s going to fix [the heroin crisis]; it’s going to have to take a comprehensive approach that involves treatment,” Butler says. “We punish them for the crime they commit to support the habit, but we never deal with the habit.”

Rep. Mills agrees the approach must help users overcome their addition in addition to punishing those who sell heroin and other drugs. He believes the Affordable Care Act may contain a provision to help pay for some treatment.

Other Pending Legislative Issues
The panel was united in supporting passage of enabling legislation for local option sales taxes (LOST). That would allow residents in specific communities to vote on an additional, time-limited sales tax to fund construction of a distinct project. The LOST proposal would have to be approved by Kentuckians as a constitutional amendment on the 2016 ballot.

The lawmakers were split on a statewide smoking ban with Rep. Butler supporting it, Rep. Mills undecided, and Reps. Floyd and Montell opposing it. “I’m still of the opinion that we let local governments act and speak in this area, and I think if we do that, it works quite well,” says Montell.

The legislators say they also expect to revisit legislation regarding a minimum wage increase, public-private partnerships, and gasoline taxes that support the state road fund. 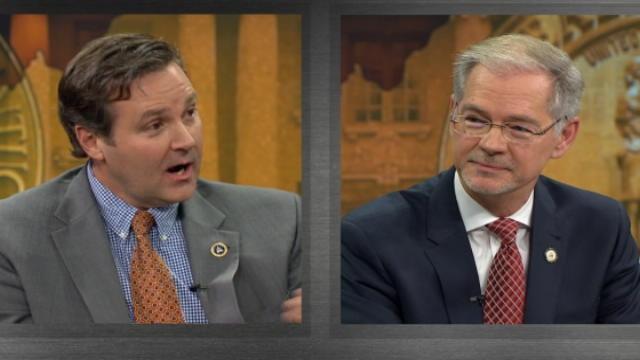