Every two years, Kentucky lawmakers face the duty of crafting a budget that details billions in state spending.

This session, lawmakers will have a new player in their budgeting work. Voters elected Democrat Andy Beshear to the governor's office last November. Beshear succeeds former Gov. Matt Bevin, a Republican who had mixed relations with the GOP-controlled legislature during his single term.

Beshear attended the House Republican caucus retreat in December, and he's met with other GOP leadership. Still, the Democratic governor faces a veto-proof majority of Republicans in both chambers. House Speaker Pro Tem David Meade (R-Stanford) says there are potential points of collaboration between Republicans and Beshear.

“We're willing to work... together to make our state better,” says Meade. But he adds, “We know that the majority of our voters have those conservative, pro-life, pro-jobs issues at hand and that’s what we’re going to concentrate and focus on, and we hope that the governor comes along with us on that.”

Meade says House members have already started their budget discussions, and Beshear is expected to present his spending plan to lawmakers on Jan. 28. Both parties agree the state needs more revenue to pay its obligations. The question is, how will policymakers try to generate those funds?

Beshear campaigned on boosting the state coffers through casinos and other forms of expanded gaming. Advocates of that idea say it could generate as much as $250 million in new revenues.

Senate Republican leaders say that any legislation to allow casino gambling is "dead on arrival" in their chamber. Meade says support is lacking among House Republicans as well. He also questions the revenue projections that proponents have touted.

But McGarvey says the state can't afford to dismiss potential gaming revenues, even if the proceeds are only half the projected amount.

“Why are we turning down $125 million annually when we’re wondering how we’re going to build our roads, fund our schools, and keep our pension promises?” asks McGarvey. “I don't want casino gaming in Kentucky because it’s my lifelong dream to have that kind of gambling here. It is here, and because it’s here we are getting all the burdens from it and none of the benefits.”

Proposals to allow wagering on sports events like football and basketball games may have better traction in the General Assembly. But sports betting alone would generate less than a tenth of the revenue for Kentucky that casinos might, according to some estimates.

“$20 million in an $11.2 billion annual budget is a rounding error,” says Senate President Pro Tem David Givens (R-Greensburg). “So if you want to talk about sports betting, step away from [arguing] it's going to raise money.”

Then there's the option of raising money through taxes. Republican lawmakers pushed through a first round of tax cuts two years ago, when they lowered the individual and corporate tax rates while expanding the sales tax base. Meade wants to continue the shift from income taxes to consumption taxes.

Givens says he can't advocate for eliminating the income tax until the state is on a solid financial footing. But he says the budget and tax changes the Republican majority has fostered so far have paid off with record business investments, which he says are generating strong income and sales tax revenues. He says the state also has one of the lowest debt ratios in years even while making significant payments to the ailing pubic pension system.

“So we are doing really good things to address the fundamental core things that make this commonwealth great,” says Givens, “and we’ve got to continue to do that.”

Democrats argue that the tax cuts already enacted, as well as the continued march to replace income taxes with sales taxes, disproportionately hurts poor and working families. House Minority Floor Leader Joni Jenkins (D-Shively) agrees that the business climate has improved, but she notes that 20 percent of Kentucky's children still live in poverty.

“We all want business to do well, but we also need to be considering how the average Kentuckian is doing,” says Jenkins. “We think that Kentuckians working is a good thing... but we also want people working in jobs that they can raise their families on and don’t have to rely on entitlements and services from the government.”

Jenkins wants lawmakers to review the estimated $13 billion in tax exemptions and economic incentives on the books to ensure that the state gets the "bang for the buck" its been promised. But she says such a comprehensive tax overhaul isn't likely.

“In an election year when all of the House and half of the Senate are up for re-election, It’s probably unrealistic think that’s going to happen,” she says.

During his campaign, Gov. Beshear also pledged to give all public school teachers a $2,000 pay raise. While many lawmakers agree that educators and public employees deserve a boost after years of no increases, the question again becomes, where does that money come from? The teacher pay hike alone would cost the state about $84 million a year, according to Jenkins.

Lawmakers must also find money to fund security improvements mandated in Senate Bill 1, the school safety legislation passed in the 2019 session. Givens says that price tag is about $19 million.

Schools are also required to hire more counselors and resource officers, which could cost an additional $80 to $85 million. The Senate President Pro Tem says a new school safety measure could ease the personnel mandates in SB 1 by requiring each campus to have a school resource officer, instead of each school. Givens says the requirement for one certified counselor for every 250 students could be changed to a counselor, mental health professional, or other qualified individual.

“We could talk about ways to leverage Medicaid money in providing those services,” says Jenkins. “There’s a great deal of cost savings for the state that brings down federal dollars to do that.”

“We've actually surpassed the rate of inflation as it relates to education funding,” says Givens.

He argues the per-pupil calculation should also include what lawmakers have allocated to teacher pensions and health insurance benefits. Current SEEK funding is $4,000 per student. Givens says adjusted for inflation, it would be $5,500. But when teacher benefits are included, he says the state's contribution amounts to $7,294 per student.

At the same time, though, the current state budget also cut about $80 million from public education for textbooks, professional development, student transportation, and other services.

“It was just a shell game of moving money around,” says McGarvey. “We have not held the education budget harmless.”

Other Issues and Priorities

Meade says House Republicans will continue to focus on issues that can improve the lives of families and protect children. He says that will include welfare reform legislation.

“How can we continue to provide that safety net for families who need public assistance, while yet helping them get the things that they need to get out into the workforce and create a better living for their families,” explains Meade.

House Democrats are focused on education issues, according to Jenkins, including bills to reduce class size and fund universal pre-kindergarten.

In the Senate, Givens says Republicans will also be focused on the budget, as well as the new school safety measure and an updated school accountability bill to bring Kentucky in line with federal Every Student Succeeds Act requirements. McGarvey says Senate Democrats will look at budget and revenue options.

In light of several controversial pardons issued by former Gov. Bevin during his final weeks in office, lawmakers may also consider ways to limit gubernatorial pardons and clemencies. Sen. Chris McDaniel (R-Taylor Mill) has a bill that eliminates the ability to issue pardons from a month before Election Day until the governor's swearing-in day.

Givens says that would restrain a governor's power to pardon without fully revoking it.

Such a change would require a constitutional amendment to be approved first by lawmakers and then by the general public. McGarvey says he's glad lawmakers and investigators are taking the issue of Bevin's pardons seriously, but he also wants to avoid what he calls a "knee-jerk reaction" to limit the executive branch.

“It needs to be carefully drafted,” says McGarvey. “I don’t want to see the legislature just go in and curb constitutional executive powers simply because of the way one person behaved.”

Renee Shaw talks with her guests about the future of policing in America. Scheduled guests: Peter Kraska, Ph.D., professor in the School of Justice Studies at Eastern Kentucky University; Keturah Herron, policy strategist with the ACLU of Kentucky; Ryan Straw, governmental affairs chair of the Kentucky State Fraternal Order of Police; Joe Monroe, Chief of Police at the University of Kentucky Police and president of the Kentucky Association of Chiefs of Police; and Walter Katz, vice president of criminal justice for Arnold Ventures (via video call).

Recap of the 2021 Kentucky General Assembly 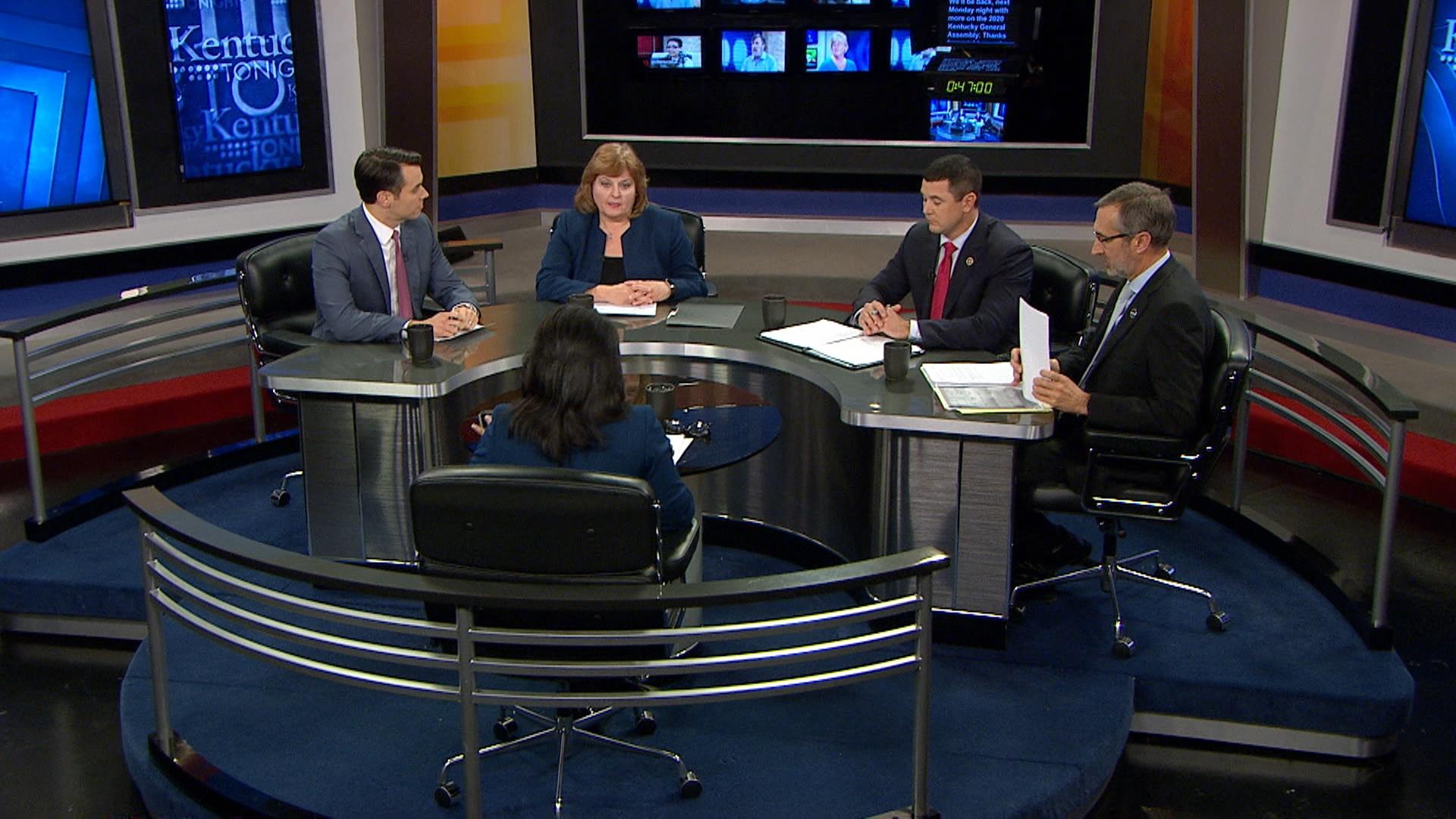