Kentucky Tonight hosted the fourth in a series of discussions about the 2020 primary elections as Renee Shaw spoke with two candidates for Congress: incumbent Rep. Andy Barr in the 6th district and Republican challenger Todd McMurtry in the 4th district. They talked about racial injustice, policing, pandemic response, health care and more.

The Republican incumbent is a Lexington native who studied government and philosophy at the University of Virginia, and law at the University of Kentucky. He worked in private practice and served as legal counsel for Gov. Ernie Fletcher. Barr is a member of the House Financial Services Committee and Veteran Affairs Committee, and co-chair of the Congressional Horse and Bourbon Caucuses.

The Republican primary also includes Chuck Eddy and Geoff Young, both of Lexington.

Barr says his goals are the same today as when he first ran for Congress in 2012.

“The cause is still to save America from bankruptcy and to restore prosperity for the American people,” he says.

But Barr admits the American dream remains elusive for many citizens, and the federal debt continues to mount. While he often supports measures designed to curb the debt, Barr says he voted for four of the five pandemic relief bills approved by Congress this year, which totaled more than $3 trillion.

“As a fiscal conservative it was, on the one hand, painful to do that,” says Barr. “But on the other hand, I think it would’ve been even more costly to our economic recovery had we not given that lifeline to those small, mom-and-pop businesses that were built over a generation.”

As a member of the House Financial Services Committee, Barr says he made it possible for more small businesses in central Kentucky to get relief through the Paycheck Protection Program. But the Republican voted against the most recent relief proposal, the $3 trillion Heroes Act, which includes funding to help state and local governments. He says the earlier bills contain substantial aid for struggling cites, counties, and states, some of which hasn’t been disbursed yet. He contends all of that money needs to be paid out before Congress considers additional relief for those government entities.

The Congressman praises President Donald Trump’s handling of the COVID-19 crisis, and he applauds the administration for withdrawing support from the World Health Organization. He is also a member of a Congressional task force assigned to investigate China’s actions during the pandemic.

“The American people deserve answers, not only for the origins of the pandemic and the virus, but the cover-up that enabled its spread,” says Barr. “Nothing is more important than getting to the bottom of why you have over 110,000 Americans who are dead now because of this pandemic.”

On the recent protests that have erupted nationwide over acts of police brutality, Barr says the deaths of George Floyd in Minneapolis and Breonna Taylor in Louisville are “horrible tragedies” and that convictions need to be brought in those cases. He also says the voices of protesters need to be heard.

“This country has a very painful and long history of racism, and it needs to stop,” the Congressman says. “I believe that there is racism in this country in virtually, unfortunately, every institution that we have.”

Barr agrees that there needs to be greater transparency and accountability in law enforcement, but he opposes calls by some protesters and politicians to defund police departments. He says that would put people, businesses, and communities in jeopardy.

“I think what we need if anything is more training of law enforcement to make sure that these horrendous tragedies and injustices don’t occur again,” says Barr. “Under-resourced police departments is a very dangerous situation where you could actually exacerbate the problem that we saw in the case of George Floyd.”

He says the federal government could also use the “power of the purse” to direct funding to departments that implement better training and reform their policing practices.

Covington trial attorney Todd McMurtry is a graduate of Centre College and the Chase College of Law at Northern Kentucky University. He worked as a paid intern for Sen. Mitch McConnell and as a fundraiser for the Republican National Committee before entering private practice. McMurtry represented Covington Catholic High School student Nick Sandmann in his 2019 libel suit against news outlets. He served two terms as a Ft. Wright city council member.

McMurtry says he is running because he says the district deserves a representative who will be an effective advocate for constituents and work to address infrastructure needs in the region.

“I intend to be the type of person who has a seat at the table, a voice [in] the conversation that uses my skills as an advocate for my clients to be able to advocate for the people of Kentucky,” he says.

The candidate also pledges to help enact President Trump’s agenda. But McMurtry’s loyalty to the president has been called into question over Facebook posts the candidate wrote in 2017 criticizing Trump and his policies. McMurtry admits it took a while for him to realize that the president’s agenda was good for the state and nation.

“Like a lot of Kentuckians, when President Trump was first elected I was unsure if he was going to govern as a conservative,” the candidate says. “Like so many people in Kentucky, I changed my tune and now consider myself a staunch supporter of the president’s policies.”

McMutry also drew criticism for tweets he posted late last year that some people considered racist and anti-immigrant. The candidate confirms he did write the tweets in question, but he says they were taken out of context. He points out that his wife is Puerto Rican and that his three children were raised in a household where Spanish was spoken daily. The Republican says it’s part of the left’s political playbook to label someone a racist.

While he credits President Trump for his “excellent record” of working with blacks and other minority groups, McMurtry also says that racial injustice is a “massive problem” in the United States. He says Americans who are protesting inequity and police brutality have a message that needs to be heard.

“We’ve been at this for 50 years and we haven’t really solved the problem,” says McMurtry. “It’s not that long ago that we had Jim Crow laws, and we have to work through that and we have to create a society that offers equal opportunity.”

Like President Trump, McMurtry calls for a wall on the southern border and for a fair system of immigration that supports economic growth.

“Legal immigration is vitally important to our country,” he says. “We need to continue to bring in top quality people into this country.”

On health care, McMurtry says people should be able to exercise their own judgment about insurance coverage. He also wants to repeal the Affordable Care Act, implement wider use of telehealth services, and allow doctors to be licensed to practice in multiple states.

“Let the free market be the better guide of health care as compared to government regulation exemplified by Obamacare,” the candidate says.

McMurtry says he also supports the president’s right to launch military actions, arguing the United States Constitution gives the chief executive broad war powers. In January, incumbent Rep. Massie was one of only three House Republicans to vote for a resolution to limit Trump’s ability to engage military force against Iran. 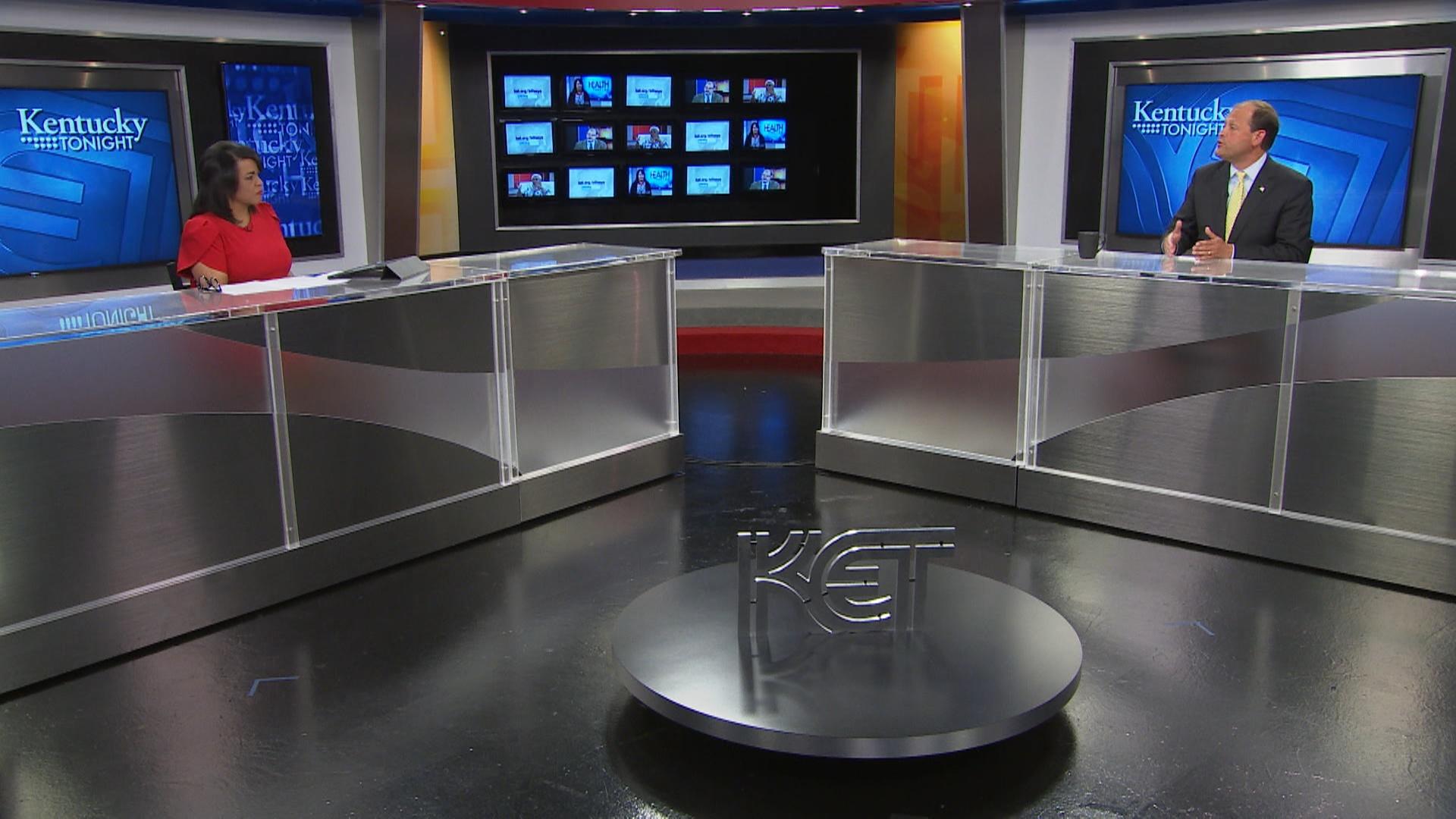