Renee Shaw moderates a discussion with the Democratic candidates from the 4th congressional district, and then welcomes four policy analysts to discuss the new budget, tax reform, and pension legislation passed in the 2018 General Assembly.
Season 25 Episode 16 Length 59:04 Premiere: 04/16/18

Candidates competing in the Democratic primary election for the U.S. House of Representatives in the state's 4th Congressional district appeared on Monday's edition of KET's Kentucky Tonight.

This was another in a series of discussions with congressional candidates in contested races across the commonwealth this election season.

The second half of the program featured a review of pension, budget, and tax legislation passed by the 2018 General Assembly.

Seth Hall was raised on family cattle and tobacco farms in Henry and Shelby Counties and now lives in La Grange. He has 30 years of experience in business development and information technology work for the health care industry.

Christina Lord is a single mother living in Milton. She had her first child at age 17 and worked full time instead of going to school. She eventually attained a degree in business administration and helped run a nursing home.

Patti Piatt held down three jobs to put herself through college as a single mother. She lives in Bellevue and has managed commercial food services for several universities. The 2017 Women’s March inspired her to run for office.

Economic Policy
All three candidates support increasing the minimum wage to at least $15 an hour. Lord says it should be $22 per hour, if it had kept up with worker productivity over the years. Hall says all middle-class workers deserve a raise, while Piatt says she wants to address income inequality and access to education and job training.

“There is an assault on our working poor and our middle-class families,” says Piatt. “Education is not being funded, the programs that help families... are being taken away.”

Hall says infrastructure investments can create jobs and lift people out of poverty. He says many roads, bridges, and buildings in the district need to be repaired or replaced, which would create good-paying union jobs.

The three Democrats say the federal government should step up to fund a new Ohio River bridge to Cincinnati. Lord contends that money would be easy to find.

“We need to cut the military spending in order to get more money into infrastructure,” says Lord.

Instead of placing tariffs on goods made by other countries coming into the United States, Lord says she wants to put levies on products that American companies produce overseas where they can avoid paying U.S. wages.

Piatt says she fears other countries will respond with their own tariffs on imports of American corn, soybeans, and bourbon, which she says will hurt Kentucky farmers. Hall says the tariffs proposed by President Donald Trump will result in a net job loss for American workers and create more chaos in the domestic economy. He says more should be done to help stabilize agricultural production.

“We need to have price supports back for our farmers,” Hall says. “If we want to have security for our nation, we need to secure our food supply.”

Health Issues
To address the opioid crisis that has ravaged northern Kentucky, Hall supports wider availability of the overdose reversal drug Naloxone and more education programs to help people avoid developing an addiction. Piatt says she wants to increase the number of treatment beds and crack down on how pharmaceutical companies distribute painkillers.

The three candidates indicate their support for legalizing medical marijuana. Lord says that would help curb illicit drug use.

On health care coverage, Piatt says she would fix the Affordable Care Act and work towards a single-payer model. Lord advocates for Medicare for all, which she contends could be funded with a small tax and would help stem rising medical expenses.

“If we took out for-profit [health care], then we could actually lower the costs,” Lord says.

“I support health care for all,” Hall says, but he adds, “I don’t know whether the economy is ready for single-payer.”

Hall says he would maintain the ACA but overhaul it so it functions better. He would also restore the risk corridor program payments that encouraged insurers to offer coverage in less attractive markets.

On gun safety, Hall says he supports the Second Amendment and would not take away anyone’s weapons, but he also contends that military-grade guns should only be available to military personnel.

Piatt describes herself as a gun owner who supports the Second Amendment. But she also lost a son to gun violence when he committed suicide in 2013.

“I support a ban on assault weapons,” says Piatt. “I support looking at the size of the clips and the magazines that are allowed to be purchased.”

Lord would ban high-capacity gun magazines because she says they are not needed.

Winkler says the KEA disliked aspects of the tax and budget bills passed by lawmakers but ultimately supported both measures. The budget provides for record levels of per-pupil funding and restores state support for local school district transportation costs. To pay for that, Winkler says they also had to support the revenue bill, which drops corporate and individual tax rates to a flat 5 percent and expands the sales tax to cover a number of services. But Winkler fears that will impact some wage-earners more than others.

“Unfortunately this is the revenue bill that we were presented,” says Winkler. “It’s not necessarily what we liked or what we would have created, but we have to support public education funding and that’s the end goal.”

The final tax measure passed on Saturday is estimated to generate nearly $400 million in new revenues. (That’s about $80 million less than the original tax overhaul lawmakers approved earlier in the session.) The non-partisan Tax Foundation says the plan will take Kentucky from 33rd in the nation in terms of competitiveness to 18th.

Watts says the tax package includes many things the business community wanted, such as a higher cigarette tax and a phase-out of the inventory tax. She calls it a good first step towards more tax improvements in the future even as she acknowledges that many small businesses will now have the burden of collecting sales taxes.

“Is it perfect? Probably not. Could there be unintended consequences down the road? Maybe,” Winkler says. “That’s why we’re going to be vigilant and looking at this and making sure that everything goes according to plan.”

Harris says the tax measure moves the commonwealth towards a more consumption-based tax system. He contends that change is crucial to Kentucky’s future.

“The status quo in our state has produced an economy that grows too slowly and that doesn't work for working families,” Harris says. “Over the last 40 years, Kentucky is 45th in economic growth; our average household income is 18% below the national average.”

He says Frankfort lawmakers did not repeat the mistakes that Kansas legislators made when radically remaking that state’s tax system in 2012. Harris adds that he hopes Kentucky will continue to lower its individual and corporate rates as the state of Indiana has done.

But Bailey argues the changes will shift the tax burden from the wealthiest to poor and middle-income families. He acknowledges that his organization has advocated for broadening the sales tax base, but not as a way to fund a $7,000 tax cut for the top 1 percent of Kentuckians.

“What this does is weaken our strongest sources [of revenue] over the long term and rely more on cigarettes, bowling, and car repair, and other things that are not exactly the leading edge of where the economy is going,” says Bailey.

Pension Reform
The KEA and other education groups remain concerned about the potential impacts of the pension reform plan that Republican leaders pushed through the General Assembly in a matter of hours. Newly hired teachers will no longer get a defined-benefit pension, but will instead be placed into a hybrid cash-balance plan that has aspects of a traditional pension and a 401(k) plan. Winkler says that will make it harder for the state to attract and retain quality teachers to Kentucky classrooms.

The state police retirement system switched to a cash-balance plan in 2013. Ever since then, according to Bailey, the force has experienced lower recruitment and higher turnover. He contends the state should maintain the existing retirement benefits.

“Defined-benefit plans are still the standard in most every state around the country,” Bailey says. “They work when you fund them.”

Harris contends the new plan will give teachers better retirement benefits than they would’ve gotten with a traditional pension. He says he supports efforts to change the federal law that prevents teachers from drawing Social Security, and the state requirement that teachers have a master’s degree.

From a macro perspective, Watts says the pension reform bill will benefit the entire state.

“This was a moderate step, I think, to get our financial house in order,” Watts says. “Even Moody's [Investors Service] just last week said that with these reforms, it’s already going to improve our credit rating.”

Charter School Funding
The budget and tax bills omitted specific funding for charter schools in the commonwealth. Bailey and Winkler say the state’s first priority must be to adequately fund traditional schools.

“We have a constitutional right to support public education first,” Winkler says. “We should not be allowing businesses to come in and make profits off the back of our public schools.”

The Kentucky Chamber has advocated for charter schools, but Watts says this year the group made public education funding the priority. She and Harris argue that the alternative school movement is not about profits for charter operators, but about improving educational attainment.

“We know that some students in our state are being underserved and that there are options and opportunities to better serve them, says Harris. “We need to explore every possible avenue to serve the students of the commonwealth properly.”

-----
KET’s candidate invitation criteria and deadlines are available at http://www.ket.org/candidate-invitation-criteria. 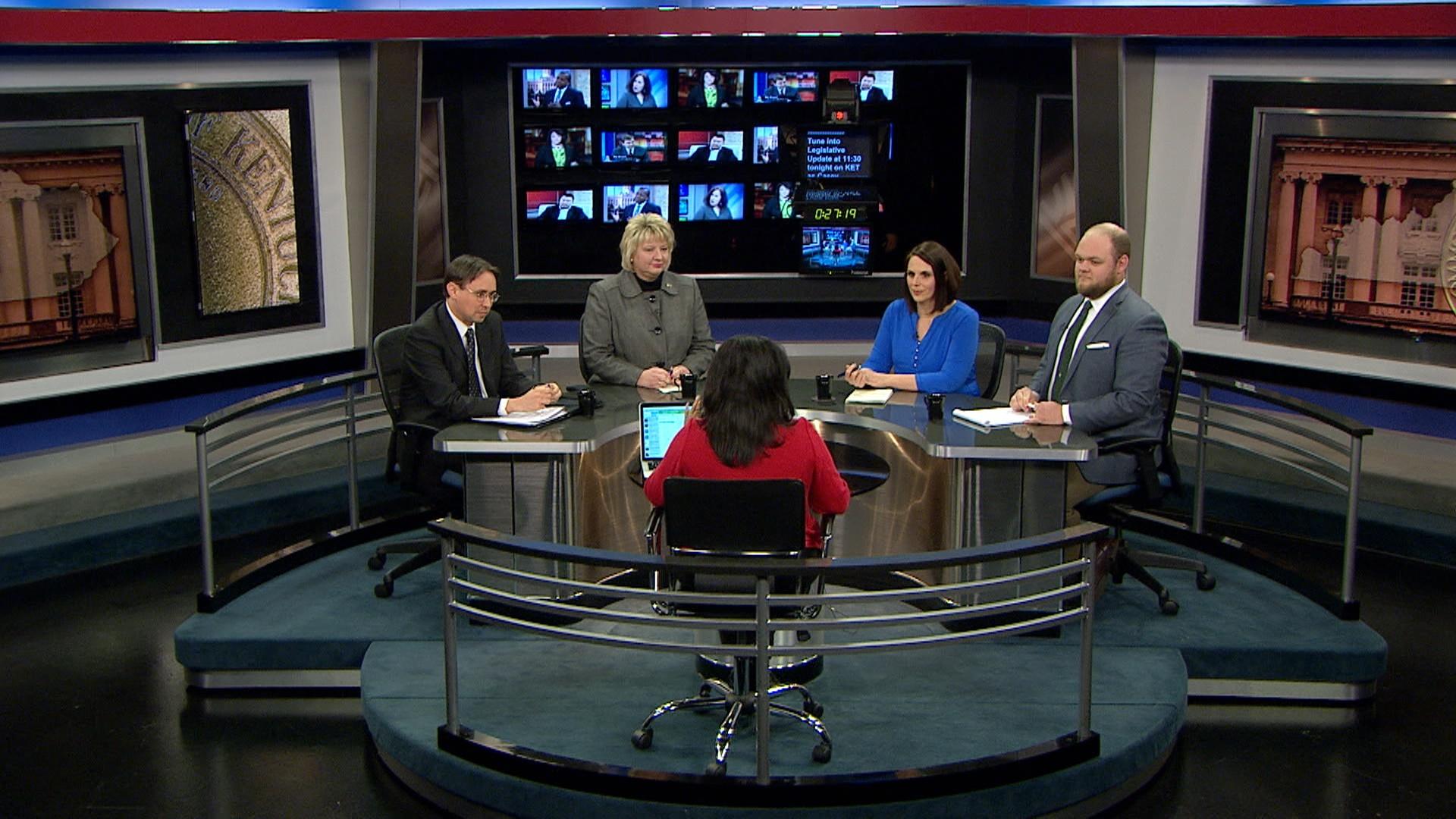