Among the many bills racing to the finish line this General Assembly session are two measures dealing with abortion: an omnibus House bill that addresses a range of abortion limits, and a Senate bill that bans the procedure after 15 weeks.

House Bill 3 is the product of discussions during the interim last year. It regulates how abortion pills are dispensed, the disposition of remains after the procedure, complaints against doctors who provided an abortion, and access to abortions by minors. Rep. Nancy Tate (R-Brandenburg) says her measure seeks to protect the health and welfare of women and young girls.

“One of the things that our vital statistics tell us is that on an annual basis we have as many as 13 or 14 children under the age of 14 that are actually seeking abortions in the commonwealth,” says Tate. “At the time where we don’t even want our children to take an aspirin at school without our consent, I think it’s very important for the parents to be involved in such a life-impacting decision as an abortion.”

If a minor is to have an abortion with parental consent, both legal guardians must present state-issued identification. Tate says child sex trafficking is at an all-time high, so doctors should verify the identities of the adults who accompany the young patient. But Tamarra Wieder, Kentucky state director for Planned Parenthood Alliance Advocates, says that requirement fails to consider parents who may not have a current driver’s license or other ID or who may be undocumented.

“There are barriers that are being put in place that are going to further hinder individuals seeking care,” says Wieder. “There’s no consideration for the real lived costs and experiences of Kentuckians in this bill.”

HB 3 also lays out the process by which a minor can seek an abortion without her parents’ consent through a process called judicial bypass. The youth would have to present clear and convincing evidence to the court why her parents should not be involved, such as in an instance of sexual abuse.

“The current process for judicial bypass is already a very burdensome process and this bill is making it even more onerous,” says Jackie McGranahan, policy strategist for the ACLU of Kentucky.

Although judicial bypass is already an option for minors who seek an abortion, HB 3 would require the judge to determine that the girl is credible, emotionally stable, understands the risks of the procedure, and can assess the current and future life consequences for having an abortion.

“We want to make sure that they are not making a rash decision based upon a traumatic situation,” says Tate.

When a minor has an abortion, HB 3 would require documentation of the patient’s age and place of residence, the name of the father, the full name and address of the provider, as well as details about the location of the procedure and any referring physicians. Tate says none of the patient information will be publicly available. Opponents fear the information could be used by anti-abortion activists to target patients or providers.

The House measure also seeks to limit mail-order access to pills that women can take to induce an abortion at home, a process known as chemical or medical abortion. Traditionally those pills could only be dispensed in person by a provider. During the COVID pandemic, the U.S. Food and Drug Administration made the drugs available by mail. In December the FDA made that policy permanent.

Tate says about 54 percent of abortions done in Kentucky are chemically induced. HB 3 would ban mail delivery of the pills to women in the commonwealth. It also calls for certification requirements for providers who dispense the pills, and data tracking requirements for when they do. Kentucky is among a number of states seeking to impose limits on the pills, according to Katie Glenn, government affairs counsel for Americans United for Life.

“We’re seeing states all over the place really feel like they need to take health and safety very seriously this year because the FDA has said we are getting out of this business, we are not going to provide a backstop anymore,” says Glenn.

Kentucky Right to Life Executive Director Addia Wuchner says it’s simply too risky to allow women to get abortion pills by mail without seeing a doctor who can assess them for other health risks or monitor them for complications after taking the pills. Glenn says the United Kingdom recently reversed their policy of distributing the pills by mail after emergency room doctors and emergency medical technicians reported a steep rise in patients experiencing complications.

Wieder contends research from the FDA and the American College of Obstetricians and Gynecologists shows medical abortions are safe and effective.

“This is the most reported on drug in the United States with 22 years of research and efficacy behind it,” says Wieder. “The FDA is following the science.”

McGranahan says Kentucky law already requires a doctor to be present during an abortion procedure, so banning abortion pills by mail isn’t necessary.

Opponents also worry that the new rules will be overly burdensome on doctors and pharmacies. For example, Wieder says the Kentucky Board of Pharmacy has reported it will be unable to follow provisions in HB 3 around certifying and regulating its providers. She also fears the new rules will make the drugs in question less available to women who need them for other reproductive health issues outside of abortions.

“You are going to have a chilling effect on pharmacists who are not going to be dispensing these medications for fear [of] being out of compliance,” says Wieder.

Tate says the tracking requirements are simply a matter of protecting women.

“We do think that it’s very important for us to know as a legislative body…. who is certified and who is going to be distributing, then dispensing these abortion-inducing pills,” says Tate.

HB 3 has other provisions that require death certificates for the aborted fetus, and for patients to collect the remains and pay for proper disposal. It would also establish a portal by which women can report concerns or complaints against doctors or other providers who assisted their abortions.

While the bill does have exemptions to protect the life of the mother, it offers no exceptions for women who are the victims of rape or incest.

That is especially troubling to Rep. Rachel Roberts (D-Newport), who was beaten and raped when she was 14 years old. She says Kentucky is already one of the toughest places in the America for women to get health care. She argues that HB 3 is “extremist” and will make access to reproductive services even worse.

“I can understand the frame of mind of a young woman who might be needing to go through that and I feel that it’s especially cruel and cumbersome,” says Roberts.

“What is more government overreach than laws banning women’s access to health care?” Roberts adds. “What is more local control than me having control over my own body?”

Roberts offered a floor amendment to HB 3 that would protect victims of rape and incest, but Tate deemed it an unfriendly amendment and the Republican supermajority in the House voted it down.

Wuchner, who is a former state representative, says it doesn’t make sense for lawmakers to add such an amendment to HB 3 at this late hour. She says they should consider that issue during the forthcoming interim period instead. As for the other provisions in the legislation, she says it’s part of state government’s job to regulate abortions.

“The Supreme Court of the United States has upheld that the states do have an interest in restricting or providing guidelines for abortion, and that’s really what the legislature is doing,” says Wuchner.

House Bill 3 passed the House earlier this month on a 77 to 20 vote. It is scheduled to be heard in the Senate Health and Welfare Committee on March 23.

Senate Bill 321 would ban any abortion after 15 weeks of gestation. It passed the Senate 31 to 6 and awaits action by the House. Tate says she would be open to folding that measure into her omnibus bill.

SB 321 mirrors a law that Mississippi passed in 2018 that bans abortions after 15 weeks. It is the subject of a constitutional challenge currently before the U.S. Supreme Court. Wieder says it is “political theater” to propose similar legislation in Kentucky before the Mississippi case is decided. 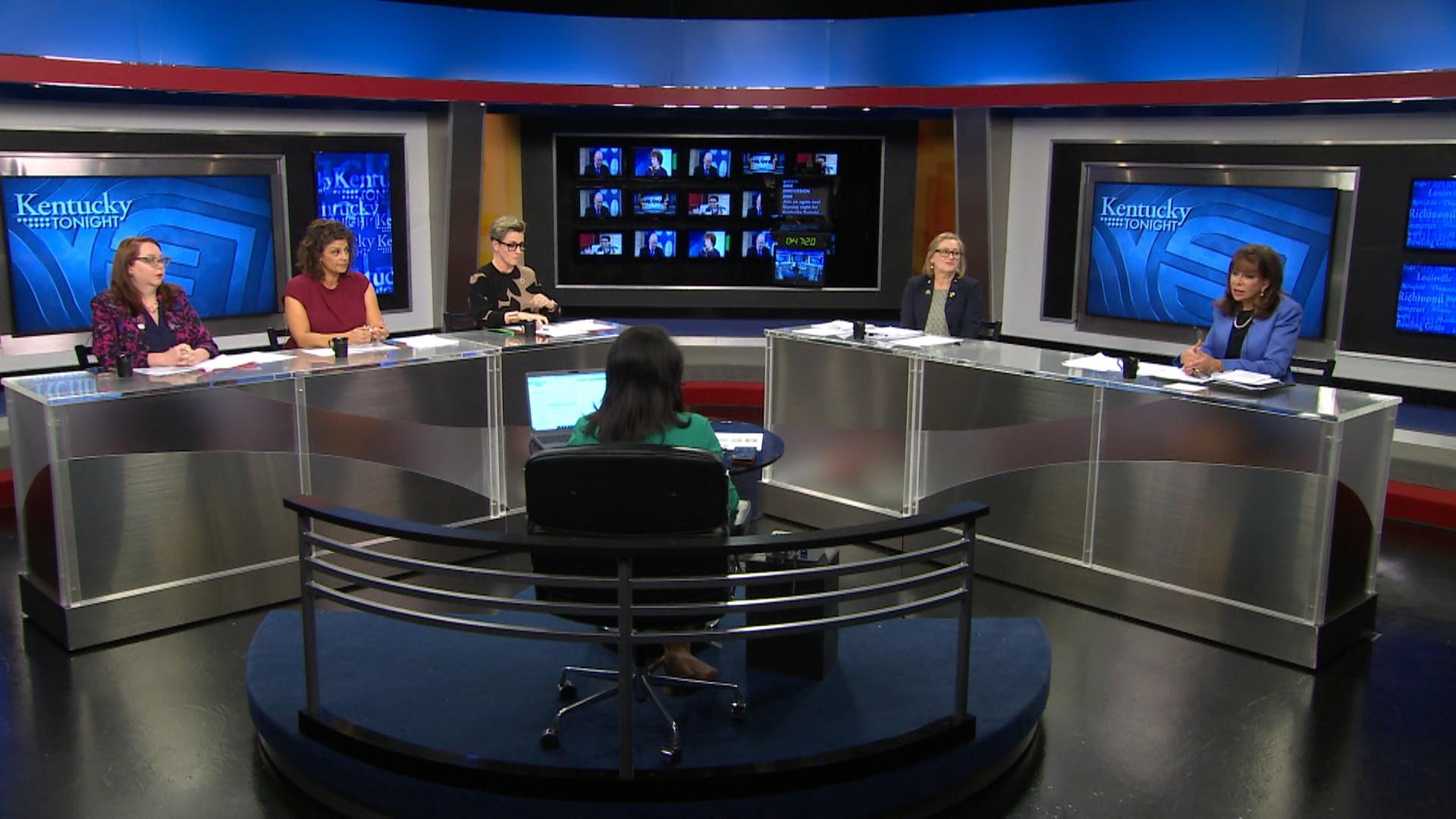