This week, advocates for public education and school choice appeared on the program to continue the discussion about funding, teacher pay, site-based decision-making councils, and charter schools.

The guests were Brigitte Blom Ramsey, executive director of The Prichard Committee for Academic Excellence; Martin Cothran, senior policy analyst for The Family Foundation of Kentucky; Tom Shelton, executive director of the Kentucky Association of School Superintendents; and Jim Waters, president and CEO of the Bluegrass Institute for Public Policy Solutions.

The State Budget and Public School Funding
Gov. Matt Bevin’s proposed state budget maintains basic per-pupil funding for schools (called SEEK) at the same dollar amount as the previous budget. The governor touts this $3,981 per K-12 student as the largest investment in public education in the state’s history. But school advocates argue that keeping SEEK funding flat doesn’t account for inflation or other education cuts that Bevin also proposed.

His plan does reduce the state’s contribution to student transportation costs and health insurance coverage for current teachers. That would force local districts to find the money elsewhere in their budgets to make up the differences in those areas. The governor’s budget also trims funding for programs that cover teacher professional development, textbook purchases, and some after-school programs.

In all, the Bevin Administration would cut about $200 million in public school funding in both years of the new state spending plan. House and Senate Education Committee Chairs Rep. John Carney and Sen. Max Wise told KET last week they hope to restore as much of that money as possible as legislators work to craft their version of the budget.

Tom Shelton of the Kentucky Association of School Superintendents says local districts can’t handle funding reductions in any amount. Some could even be forced into insolvency.

“Districts have already cut so much over time and our funding has lagged substantially over the last few years that there’s just simply no way to manage these type of cuts,” he says.

As for the flat SEEK dollars, Shelton says per-pupil spending in Kentucky has actually decreased 15.8 percent since 2008, according to a study from the nonpartisan Center on Budget and Policy Priorities in Washington, DC. Only Texas and Oklahoma saw bigger decreases in per-student funding.

Even while budgets are stagnant, Kentucky officials have pushed ambitious new goals to close persistent achievement gaps among students and tighten accountability standards for schools

“So to cut funding for education at the same time we’re putting more pressure on schools and districts to increase student outcomes with a great deal of urgency feels to be in conflict,” says The Prichard Committee’s Brigitte Blom Ramsey.

The achievement gaps between certain demographic groups is also a concern for Jim Waters of the Bluegrass Institute for Public Policy Solutions. For example, he says black children significantly lag their white peers in being college and career ready when they graduate high school. But he argues that changing those outcomes isn’t a matter of funding. He contends total per-pupil revenues from local, state, and federal funding to school districts has actually increased about $3,500 since 2008.

“I think you’re hard-pressed to say that just putting more money into education or even restoring these cuts is somehow going to magically improve our education system,” Waters says. “It definitely takes money to educate students, but the question is what are we getting in return for that?”

Martin Cothran of The Family Foundation of Kentucky echoes that concern about efficiencies and returns on investment. He says he works with private schools that do more with less funding, so public schools should be able to do the same, especially when the commonwealth has other financial obligations.

“We spend almost 50 percent of the state budget on education and that should be enough,” Cothran says.

Shelton says he thinks there may be opportunities to make student transportation more efficient, but he says that would have to be district specific. In urban and suburban areas, more parents drive their kids to school, according to Shelton. But rural counties and districts in eastern Kentucky are more dependent on school busses to transport students.

The state has funded 58 percent of the transportation costs incurred by local districts. Under the governor’s proposed budget, the state’s share drops to 25 percent. For a rural district like Hickman County in far western Kentucky, that change would increase transportation costs $358 per student, according to Ramsey. In contrast, she says the Beechwood Independent School District in suburban northern Kentucky would only have their bussing costs increase by a dollar per pupil.

Shelton applauds the governor’s commitment to address the pension crisis, but he opposes the move away a defined-benefit plan for retired educators.

“We think that that is one of the best recruiting tools we have to bring people into the profession because it’s certainly not the pay that we can offer,” says Shelton.

Ramsey adds that if lawmakers proceed with shifting new teachers into a defined-contribution plan, then they should also get a boost in pay to compensate for the more modest retirement benefits they will receive at the ends of their careers.

Cothran agrees that compensation is an important issue.

Waters contends Kentucky’s public school teachers are in the top half of the nation in terms of pay. He says some veteran educators in the Jefferson County Public Schools, the state’s largest school system, earn upwards of $85,000 a year.

He says he would support paying the best teachers more to take jobs in the worst-performing schools, where they could do the most good at improving student achievement. But he says superintendents don’t have the authority to make those decisions because of school system laws and union contracts.

Shelton agrees that teacher placement is an issue, but he says union rules aren’t the problem. He says only three of the state’s 173 school districts have union contracts.

“The real reason we don’t have our best teachers being placed into the lower performing schools is because schools and school-based decision-making councils also hire the teachers, rather than superintendents and districts,” Shelton says. “Districts, we certainly would agree, need to be able to have the ability to place the best teachers in front of our most needy kids.”

One bill currently before the legislature, Senate Bill 55, would shift control over hiring teachers and principals from site-based decision-making councils to district administrators. The Kentucky Education Reform Act of 1990 created those councils, comprised of parents, teachers, and a school administrator, to help set school policy.

Waters, who also supports SB 55, contends the councils were well intentioned, but haven’t performed as they should because teachers have a greater representation in the groups than parents. Ramsey says the councils were created as a way to engage more people in school operations and to foster more autonomy and innovation in the classroom. She admits some councils work better than others, but she is concerned about the potential impacts of SB 55.

School Choice
In 2017 state lawmakers enacted legislation to permit charter schools to operate in the commonwealth. But Rep. Carney said last week he doubts whether the General Assembly will appropriate any money in the new state budget to help fund the launch of those schools. Carney said funding traditional public education should be the state’s first priority.

He also questioned the prospects for another school choice option being considered this year. Two proposed bills would provide tax credits to individuals and corporations who donate to non-profit organizations that provide scholarships to students who want to attend a K-12 private school.

Ramsey says the tax credit would cost the state $200 million. She argues the state simply can’t afford to spend that kind of money to, in effect, support private schools when public schools are struggling.

Cothran says he believes the state would actually save money by helping parents enroll their children in private schools.

“If you pay the full tuition of child to go to a private school, it’s going to be usually about half of what you would be paying for the child to go to the public school,” Cothran says.

As of last year, some 17 states had scholarship tax credit programs, according to the National Conference of State Legislatures. Waters says wealthy Kentucky families can afford to send their children to private schools, and the tax credit scholarships would extend that option to lower income families, He says state lawmakers shouldn’t fear trying the credits because he contends more school choice options are the best way to improve student performance.

“We think that scholarship tax credits and charter schools are important components in terms of creating the kind of environment that we want to see for actually closing the achievement gap and being more efficient and effective in our education system,” Waters says.

Traditional schools have made significant improvements since KERA, says Ramsey. Even with lingering shortcomings in math and reading proficiency among some Kentucky students, she says the commonwealth remains competitive with states that have had charter schools for years.

“We’re not behind because we haven’t adopted the choice model,” Ramsey counters. “Maybe we need to think more closely, more intently about the promise of public education as opposed to wide open choice across the state.”

Shelton says he’s not opposed to competition from charter schools, but he argues that public schools should be fully funded first. Plus he contends the innovation that charter school advocates promote is already happening in traditional classrooms.

“The flexibility that our public schools have here is unprecedented compared to many other places,” Shelton says. “If you would look at many of our ‘public’ schools here, they would be considered charter schools in many other states.” 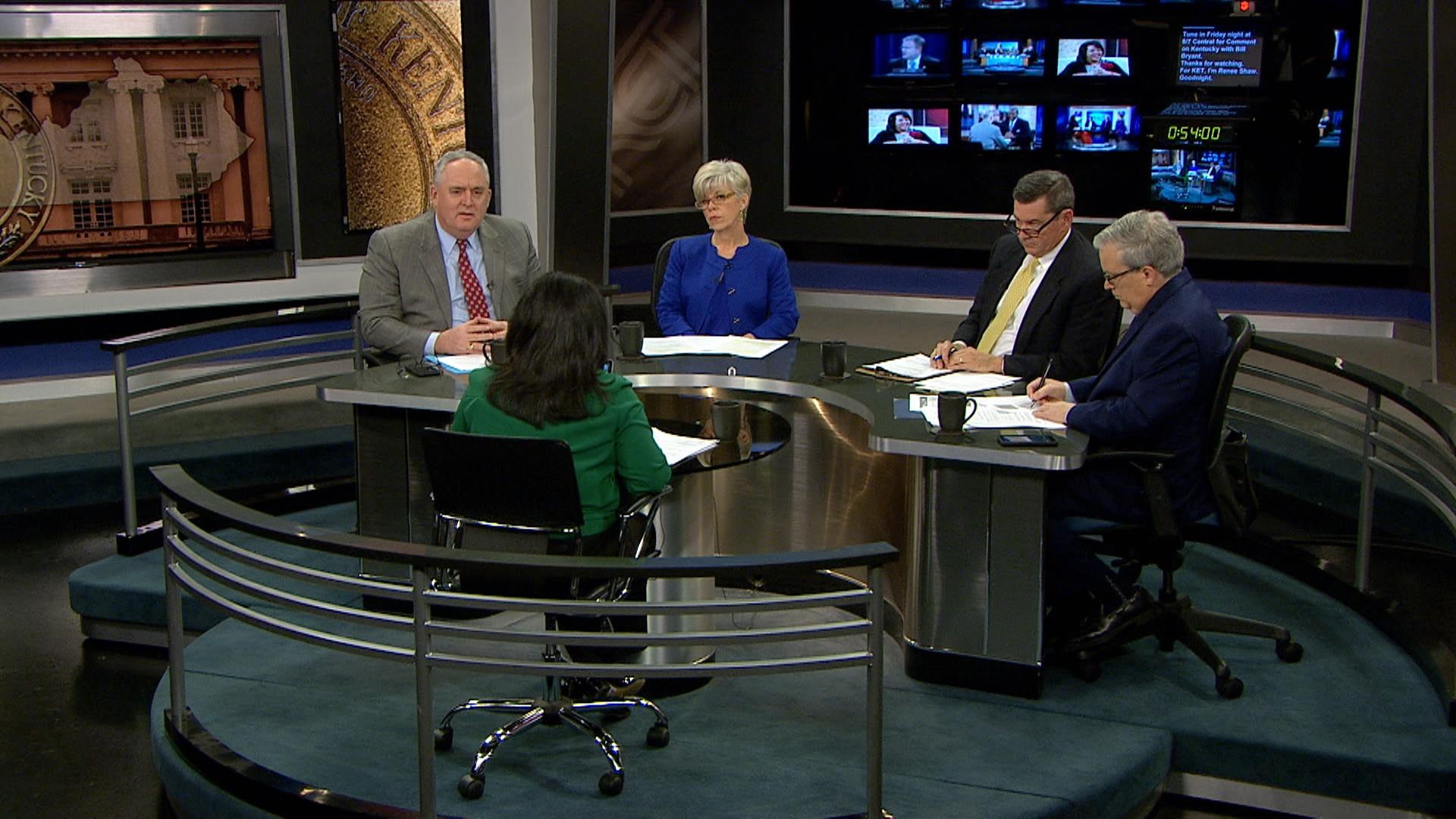