Candidates competing in the race for governor of the commonwealth appeared on KET’s Kentucky Tonight.

This was the last in a series of discussions with candidates running for statewide constitutional offices in the 2019 election season.

Democrat Andy Beshear is a graduate of Vanderbilt and the University of Virginia School of Law. He worked for an international law firm in Washington, D.C., and in private practice in Louisville before being elected Kentucky’s attorney general in 2015. Beshear previously served on the boards of the University of Louisville and Greater Louisville, Inc.

Incumbent Republican Matt Bevin is a native of New Hampshire, a U.S. Army veteran, and a Louisville businessman. He has owned or invested in multiple companies that range from manufacturing to investment services to medical devices. Following an unsuccessful bid for U.S. Senate in 2014, Bevin was elected to the governor’s office in 2015.

Support for Public Schools and Teachers

The governor touts the investments he’s made in public education, including fully funding the Kentucky Teachers’ Retirement System, increasing per-pupil funding for schools to record levels, and allocating all Kentucky Lottery proceeds to education. He also dismisses concerns that he has insulted teachers with comments he made over school funding and pension reform during his first term.

“Nothing that I’ve said about educators do I regret,” says Bevin. “You’ll find that I’ve had many, many choice words about the KEA, the teacher’s union, not about teachers themselves.”

Beshear says he would make public education the top funding priority of his administration. He also wants to give all public school teachers a $2,000 pay raise, which would cost the state an estimated $80 million. Beshear also pledges to shrink class sizes, improve school security, boost mental health care for students, and bring more technology to the classroom.

The Question of Gaming

Beshear says he would fund these changes by enacting expanded gaming in the commonwealth. He says that would bring $550 million in new revenues to state coffers, which he plans to allocate to the public pension systems. The Democrat says that would free up General Fund moneys that could go to education and other budget needs.

Bevin argues that Beshear’s gaming revenue projections are overly optimistic. The governor is also concerned that gaming comes with too high a social cost, including an increased number of suicides.

Earlier this month, Republican leaders in the Kentucky Senate said they would not consider any gaming legislation proposed by Beshear should he be elected governor. Bevin says that leaves Beshear with no viable revenue options to fund his agenda.

The attorney general says his proposal is different because it’s the first to dedicate 100% of gambling revenues to the pensions. He also argues that expanded gaming could be enacted through simple legislation.

“We’re not taking any more dollars from people, we’re just keeping them here,” says Beshear. “This is about making sure, since Kentuckians are already gaming, that we keep those dollars in state.”

The Democrat says he would also enact medical marijuana and tax it, close corporate and personal tax loopholes that benefit the wealthy, and end tax breaks for companies that create low-wage jobs.

Bevin says the state needs more revenues, but he wants to get it through pro-business policies that promote overall economic growth.

But the Republican adds that a higher gas tax “has to happen” for the state to fund much-needed road and bridge projects.

On the issue of pensions, Bevin says he’s the only governor to be honest with Kentuckians about the state’s pension plans, which he says are mired in unfunded liabilities totaling more than $60 billion. He says he’s not pushing pension costs down to city and county governments, but he admits that taxpayers are on the hook to pay off these debts.

With more retirees than active employees, Bevin says the systems are not financially or demographically sustainable. He says the benefit structure must be changed for future hires, but he says even that won’t address the existing unfunded liabilities.

“It stops the digging,” says Bevin. “We still would have 30 years worth of paying off $60-plus billion, which means that future governors and future legislators are going to have to be required by law to pay off this obligation.”

Beshear says the pension obligations can be paid from the dedicated revenue generated by expanded gaming, not by cutting retiree benefits or by raising taxes on Kentuckians.

Bevin contends the state has seen 57,000 new jobs along with record-low unemployment since he took office four years ago. He also says average salaries in the commonwealth have increased nearly 4% in the last year and that the state also has attracted $22 billion in new business investments during his first term. The governor says that growth along with a more favorable tax climate will pay off for the commonwealth with even more jobs and higher wages in the future.

Beshear contends that most Kentuckians aren’t sharing in that prosperity. He says many families are working harder than ever but falling further behind because of higher food and prescription drug costs. He also says many rural counties have seen higher unemployment and lower per capita incomes.

The Democrat says one of his first acts as governor would be to ensure pay equity between male and female state workers. In the private sector, Beshear wants to foster more advanced manufacturing, health care, and agri-technology jobs.

“We can create six-figure [income] jobs from everything from the science in the seed, to the technology on the tractor, to the data analytics to predict weather,” says Beshear. “It’s how we take our farming and move it into the future.”

Beshear calls health care a “basic human right” and says he would immediately rescind the Bevin Administration’s Medicaid waiver application upon taking office. That waiver requires people in the Medicaid expansion population to work, volunteer, or go to school 20 hours a week, and to pay small premiums and copays.

“It will result in people not having coverage,” says Beshear.

The Republican says if his waiver plan is struck down, he will be forced to end Medicaid expansion, because, he contends, the state can’t afford to pay the Medicaid costs of able-bodied individuals who he says chose not to work. 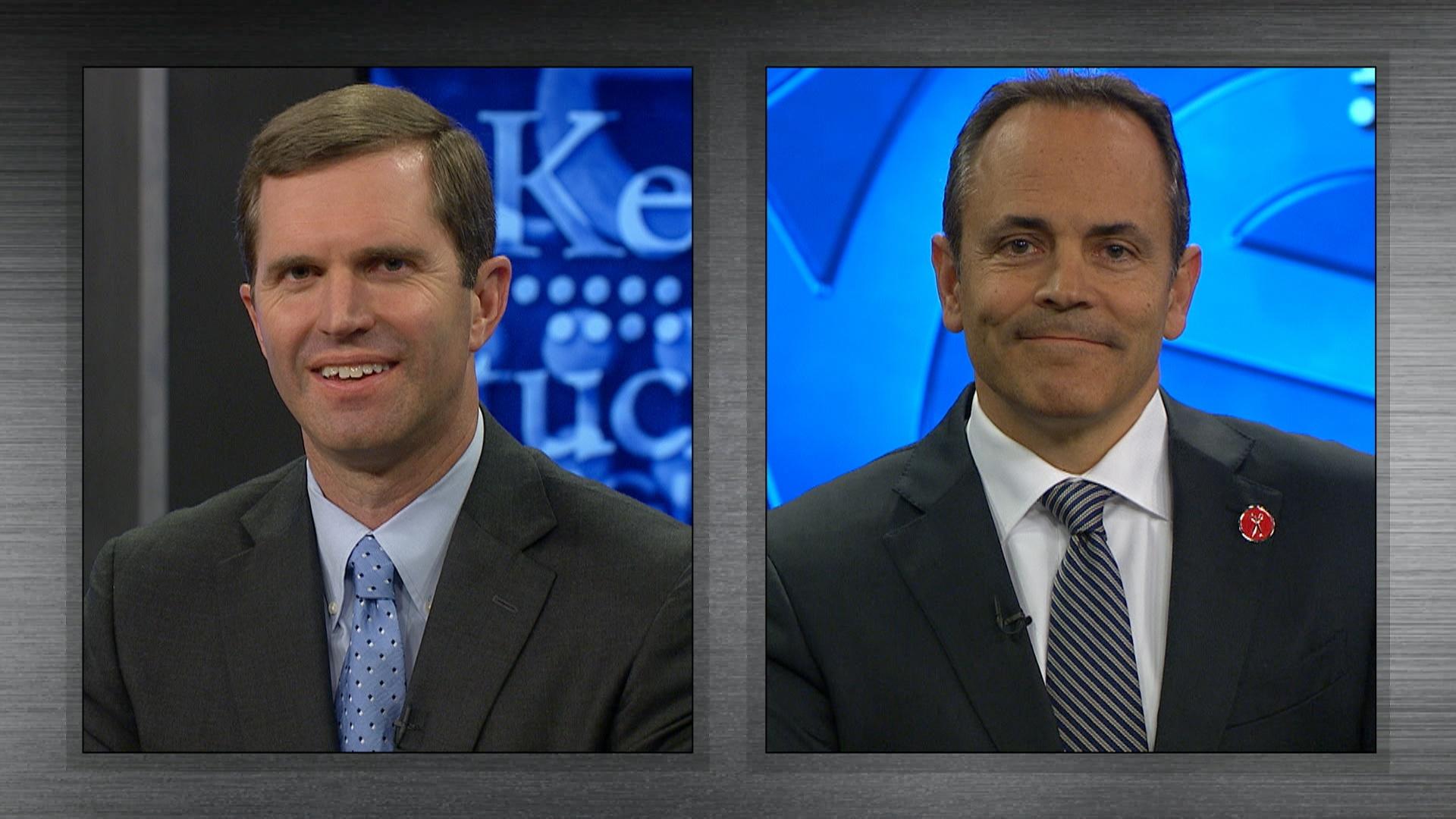