Grimes grew up in Maysville. She studied political science at Rhodes College in Memphis, Tenn., and law at the Washington College of Law at American University. Grimes was a business attorney in private practice in Lexington before winning election as Secretary of State in 2011.

“As Kentucky’s chief business official, we are continuing to grow our economy… and truly support the small businesses across the commonwealth that have kept Kentucky going in what have been very bad economic times,” says Grimes.

A native of Kenton County, Knipper earned a political science degree from Northern Kentucky University. He has professional certifications in business analysis, project management, and information technology (IT). Knipper served one term on the Erlanger City Council and is a project manager for Catholic Health Initiatives.

“I’d be an advocate [for] the state like I was for those corporations, the S&P 500 and Forbes 200 companies that I represented,” Knipper says. “I’ve made those companies very successful.”

Business Services
Grimes touts the one-stop online portal her office launched for businesses to complete their official filings, pay taxes, and explore economic development incentives. Grimes says she’s also worked to amend business-related laws and create a single identifier for a company to use when dealing with state government. She says the new services have helped bring jobs to the commonwealth.

“You don’t get 100,000 new businesses coming here to make Kentucky their home if you don’t embrace technology, if you don’t update our laws, and if you don’t streamline the process and cut the red tape,” Grimes says.

Citing his own business and IT background, Knipper says the state’s business portal is a good idea but that it’s become outdated and cumbersome. As an example, he says people should be able to complete business forms online rather than having to download PDF files of the documents. He contends the best thing government can do for business is to get out of the way.

“We can increase business efficiencies astronomically by redesigning the portal,” Knipper says. “I want to make sure the one-stop shop is streamlined a heck of a lot more than it is now.”

Voter Registration
Grimes says she wants to continue to expand access to the vote for all eligible Kentuckians. Today, the secretary announced plans to allow residents to electronically register to vote by next year.

“The public here in Kentucky has been demanding for this state to actually enter the 21st century as it relates to our election administration,” Grimes says.

The Democrat says electronic registration will be more secure, make updating voter rolls easier, and save the state and counties money.

“That’s not a good idea,” Knipper counters. “You’re compounding a problem and finding new ways for people to register to vote while there’s already a problem with the registration rolls to begin with.”

Knipper alleges that 18 of Kentucky’s 120 counties have more people registered to vote than actually live in those counties. He says he doesn’t know if fraud is occurring but he cites one instance where an individual allegedly voted in an election in both Ohio and Kentucky. He also notes the concerns he has with the state’s online system for military voters.

The Republican calls for an audit of voter records to ensure the accuracy of the data. And while he favors electronic registration, Knipper questions rushing to launch the new system when county and state election officials have little experience with the technology. He contends IT professionals like himself should be involved with the implementation.

Grimes defends the integrity of the state’s voter data and says her office complies with all federal voter registration regulations. She calls the new initiative a historic step that can increase participation in elections.

“I want people in this state to be able to vote, more Republicans, more Democrats, more independents,” Grimes says. “Democracy is truly at it’s best when everyone is engaged.”

Other Voting Issues
Both Knipper and Grimes bemoan low voter participation in elections. The state had a relatively strong turnout of almost 46 percent for the 2014 general election that featured Grimes in a heated battle with incumbent U.S. Sen. Mitch McConnell. But the May primaries for statewide constitutional offices only generated a 12.5 percent turnout.

Reiterating his call for a review of voter rolls, Knipper says participation will improve once people know that their ballots truly count. He’s also spoken at state universities to encourage turnout among students. Finally Knipper says quality candidates will generate enthusiasm and turnout among the electorate.

“I think the policies that are being put forth… from people that are businessmen like myself and [GOP gubernatorial nominee Matt] Bevin, who can give people hope and inspiration to want to go out and vote, that’s how you motivate people,” Knipper says.

Grimes wants to expand opportunities for early and absentee voting in the state, which she says will boost participation. She opposes the Republican presidential caucus next year because she fears it will disenfranchise GOP voters. She also cites concerns that Sen. Rand Paul’s presidential campaign is funding the caucuses.

“At the end of the day having an election that says ‘bought and paid for’ by a candidate who’s on the ballot does not seem ethical nor does it seem to uphold the integrity of the process,” Grimes says.

The two candidates agree that non-violent felons who have completed their sentences should have their voting rights restored. And they say the state should move toward electronic voting once the technology is proven to be secure and reliable. 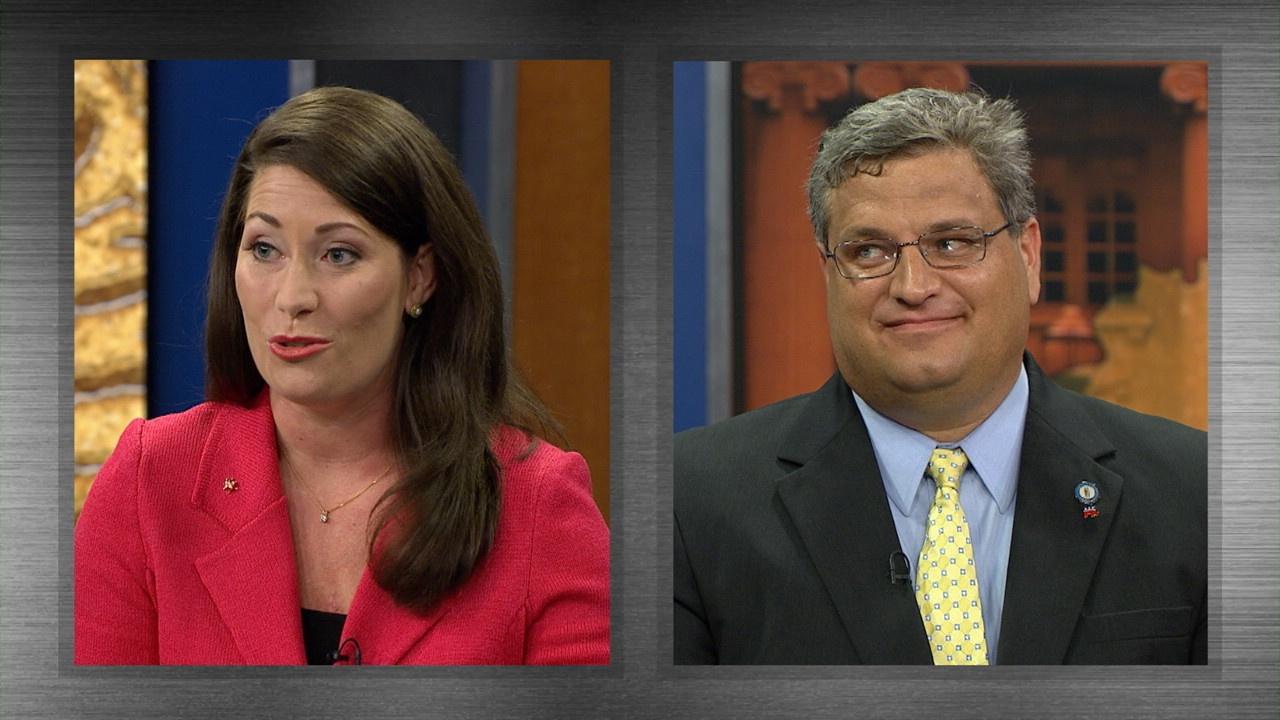