Candidates in the 2nd, 3rd, and 6th Congressional Districts Discuss the Issues

Hank Linderman is one of two Democrats running for Congress in Kentucky’s 2nd district. Born in Florida, Linderman finished high school in Louisville and worked as a musician and recording engineer in southern California before settling back in Kentucky in Grayson County. He was the Democratic nominee in 2018 and 2020 against incumbent Republican Brett Guthrie.

Linderman says Democrats have been out of the political picture for too long in rural and small-town districts like Kentucky’s 2nd. He says the party should invest the time and effort needed over the long term to bring those voters back into the Democratic fold.

“We need to reconnect with people who work – people who use their bodies as well as their minds to work,” says Linderman. “People who only get paid when they work.”

The Democrat says his approach to legislating would be to focus on how policies impact average citizens and working families. For example, he says every home in the United States should have broadband internet, especially in rural communities. Instead of subsidizing large companies to provide that service, he proposes providing low-interest government loans to rural cooperatives so that local communities can create their own networks.

Linderman says he favors legalization of medicinal and recreational marijuana and providing a pathway to citizenship for illegal immigrants. He attributes current record levels of inflation to labor shortages, the war in Ukraine, and corporate greed.

“I think a big part of the inflation that we’re experiencing right now is corporations flexing their power, raising prices simply because they can,” Linderman says.

He contends companies like Apple, Amazon, and Walmart wield too much power and influence, which he says ends up being bad for consumers. He the federal government should enforce antitrust laws to break up such monopolistic powers.

The Democrat is less concerned about government spending and $30 trillion in national debt. Linderman argues the problem is more about what federal dollars are spent on rather than how much is spent.

Another major issue for Linderman is economic inequality, which he contends contributes to deep divisions in American society. He says those divisions can’t be repaired from the top down.

“Both of our parties need to reconnect with grass roots,” says the Democrat. “That is where we can repair division, one on one with each other.”

As for income inequality, Linderman says the nation must address corruption in its political and economic systems, and he says the wealthy need to pay more in taxes, which he contends would not hurt job creation.

“I would point to our history when we had a very high marginal tax rate during President Eisenhower’s administration,” says Linderman. “That was the beginning of the most productive period in American history.”

Stuart Ray is one of seven candidates seeking the Republican nomination in Kentucky’s 3rd Congressional district, a seat being vacated by Rep. John Yarmuth, who is retiring. Ray worked for his family’s steel company in Louisville before starting his own metals and trucking firm. He has served on the boards of the KFC Yum! Center and the Kentucky Department of Fish and Wildlife Commission.

Ray describes himself as a “reasonably minded Republican” who wants to avoid Washington partisanship and work with both parties. He says his top issues are inflation and government expenditures.

“The spending is, I think, unsustainable and out of control,” he says.

The Republican says there is good government spending, like the CARES Act, the first COVID relief package. But he says other bills, like the $1.2 trillion infrastructure package contain too much pork.

As a Congressman, Ray says he would be a more visible cheerleader for the 3rd district, which comprises most of Jefferson County. He says that includes taking an active role in economic development activities to bring good-paying jobs to all parts of Louisville, especially underdeveloped areas.

“I want to attract additional businesses to come to Louisville,” says Ray. “I’d like to see a more well-balanced approach, including western Louisville and southern Louisville, too, because I think they’ve been ignored.”

Ray says he is also pro-law enforcement. He says the Louisville Metro Police Department has hundreds of openings, which he says is endangers the public and current officers. He also calls for tougher drug interdiction at the southern border and he wants to put metal detectors in every Louisville school to ensure that students don’t bring weapons into the classroom.

“If you go to an airport, if you go to a Congressional building, or if you go into any kind of public building, if you go to a sporting event, you go through a metal detector,” say Ray. “I think we can do that quickly and unobtrusively into JCPS schools and make sure that there’s not one gun in our schools.”

The Republican is critical of President Joe Biden’s handling of the war in Ukraine, saying the administration should have imposed tougher sanctions sooner, and sent more military aid – but not troops – faster.

“It was no surprise that Russia was going to take action in Ukraine, and I think we were very, very slow to support Ukraine,” says Ray. “Any time there’s a democracy and free people, I think we should support and intervene as a leader of the free world immediately.”

Rep. Andy Barr is seeking his sixth term in Congress, representing Kentucky’s 6th district. The Lexington native worked as an attorney in private practice, as a Congressional assistant, and as legal counsel for former Gov. Ernie Fletcher. He is a senior member of the House Financial Services Committee and serves on the House Foreign Affairs Committee. Barr is one of two candidates seeking the Republican nomination.

“Everywhere I go in the 6th Congressional district, the people are hurting,” says Barr. “They don’t like the leadership that they’re seeing in Washington. They see a constellation of crises.”

Barr specifically points to record inflation, illegal immigrants and illicit drugs crossing the U.S.-Mexico border, and the war in Ukraine. He blames inflation on what he calls a “toxic mix of bad policy” from the Biden Administration, including what he says is government overspending and paying people not to work, restrictions on domestic energy production, and mistakes by the Federal Reserve.

“They kept the interest rates too low for too long and that dramatically added fuel to this inflation fire,” says Barr. “It’s going to take a very aggressive move by the Federal Reserve to break this inflation fever.”

The Republican also says it’s a mistake for the president to end the Keystone XL pipeline and energy leases on federal lands, and for federal regulators to limit access to investment capital for energy companies. Barr contends those businesses employ the best scientists working to develop carbon capture technology.

“I believe in climate change, but what we need is to not deprive American scientists and energy companies of access to capital and financing,” says Barr. “We need to innovate in United States and export our clean-energy technologies in both fossil and non-fossil energy to the rest of the world. That’s how you solve climate change, not through another thousand pages of regulation in the federal register.”

On the conflict between Russia and Ukraine, Barr says President Biden should be doing more to help the Ukrainian people, but the Republican stops short of calling for a no-fly zone in the region.

“I think that Ukraine can win with adequate military assistance and with more economic pressure,” he says. “We don’t need a no fly-zone. We need to give [Ukrainian President Volodymyr Zelenskyy] the military capabilities to enforce a no-fly zone himself.”

“No one is responsible for the atrocities in Ukraine other than Vladimir Putin – he’s a war criminal,” says Barr, “but the lesson of the current administration’s disastrous foreign policy is that weakness invites aggression.”

The Congressman says he supports the sanctions the Biden Administration has leveled against Russia, but he contends they include a loophole that allows energy-related transactions to continue. Barr says he has proposed legislation to close that loophole by putting proceeds from those transactions into an escrow account that Russia could access only after they withdraw from Ukraine and use only for humanitarian purposes.

“That would strike an economic blow to Putin the likes he hasn’t seen before,” says Barr. 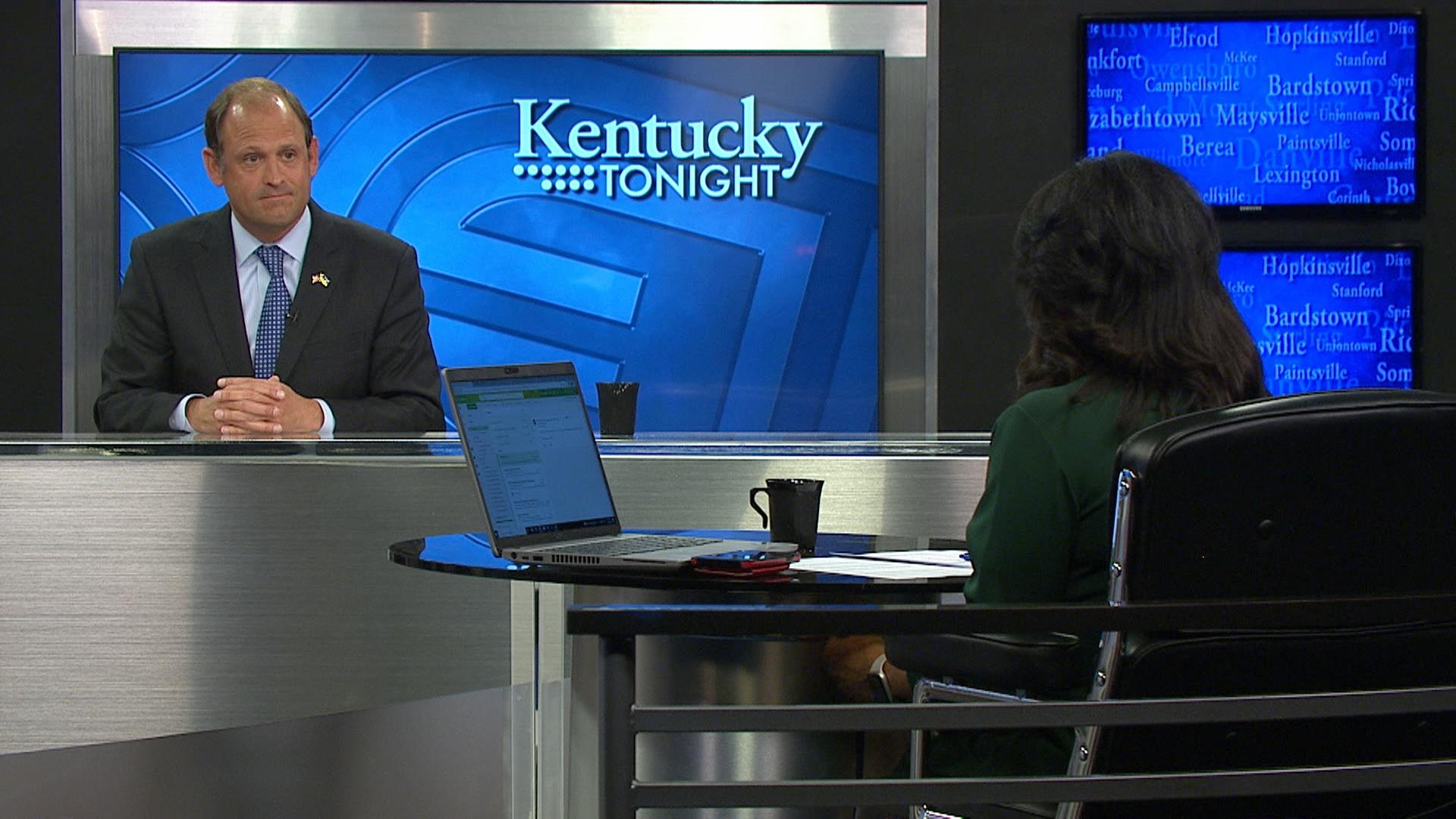