What’s Next for the Affordable Care Act in Kentucky?

It took only 18 days from when House Speaker Paul Ryan introduced the American Health Care Act to when he pulled the bill because it lacked the votes for passage. The GOP proposal to repeal and replace the Affordable Care Act drew opposition from lawmakers across the political spectrum.

So what happens next with health care policy? Will President Donald Trump let Obamacare “explode,” as he said in remarks to the press last Friday? Can Republicans craft a new plan that will garner sufficient support from free-market conservatives and more moderate members of the GOP? Or can Democrats find enough partners across the aisle to make changes to the ACA that both sides agree are necessary?

Why Ryan’s Proposal Failed
Ever since Obamacare became law seven years ago, Republicans have promised to repeal the health care policy. Party faithful had big hopes for finally achieving that goal now that the GOP holds both chambers of Congress and the White House. But to some Republicans, Ryan’s American Health Care Act (ACHA) failed to live up to that basic promise.

“This was repeal in name only,” says Jim Waters, “I think a lot of conservatives had a real problem with that.”

Waters says the GOP plan did technically eliminate the individual mandate requiring Americans to have health insurance, which he argues took away people’s freedom of choice and resulted in higher health care costs. But the ACHA replaced the mandate with a 30 percent penalty on individuals who try to renew their coverage after allowing an existing policy to lapse. So in essence, the AHCA really didn’t end the mandate, according to Waters. He says the bill also didn’t go far enough to integrate free market reforms to foster more competition in the health care industry.

From the perspective of those in the middle and on the left, the AHCA had other flaws.

“The reason why the bill was not popular with a lot of Republicans, too, not just Democrats, is because it raised prices, it raised premiums, it violated lots of Trump’s promises,” says Rep. Steve Riggs. “It was an awful plan in terms of trying to help people.”

The GOP bill sought to scale back so-called “essential health benefits” that Obamacare mandated and opponents said also drove up costs. Dustin Pugel says the idea that insurance policies would no longer be required to include maternity care or prescription drugs proved highly unpopular with those who had grown accustomed to those benefits.

Giving lawmakers and the public less than a month to debate all the nuances of the proposed legislation also contributed to its defeat, says Rep. Addia Wuchner.

“We should call this the American Health Care Confusion Act because there so much misinformation, there was so much fear generated among individuals,” Wuchner says. “There was just so much confusion that I don’t think people could decipher it.”

Speaking Up for the Affordable Care Act
Instead of repealing Obamacare, Pugel contends lawmakers should keep it and improve upon it because it has benefited so many people.

“I think for Kentucky the Affordable Care Act was a game-changer,” Pugel says. “Our uninsured rate was cut by more than half, we had 500,000 get coverage, and that led them to go get preventative screenings and drug treatment, and in some cases people’s health actually improved.”

Pugel points to studies that indicate preventable hospitalizations for some chronic conditions like asthma and blood pressure have decreased. He also says health care providers have seen a 67 percent decline in uncompensated care now that more people have insurance.

But additional research shows that other health metrics have not yet improved as dramatically as initially hoped, and noncritical emergency room visits remain as high as before Obamacare was enacted. Fewer insurance companies are also participating in many markets. For example there is only one carrier offering coverage in about half of Kentucky counties.

Riggs says he doesn’t think Obamacare will explode, but he acknowledges that after seven years, it does need updating. Wuchner says it would be difficult to remove benefits that people have received under Obamacare and Medicaid expansion. With so many people gaining insurance for the first time, she says those individuals need to be taught how to make the most of it.

“A lot of education needs to happen around health care in a compassionate way [for people] to understand how to use the tool of having coverage,” says Wuchner.

Waters says another criticism of Obamacare is that deductibles are so high under some plans that people still can’t afford to go to the doctor even if they do have coverage. He says having an insurance card isn’t the same thing has having access to health care.

Where Do We Go Next?
What could be done to improve upon Obamacare or new repeal-and-replace legislation?

Waters says lawmakers should seek to contain costs by removing the individual mandate, bringing more transparency to what providers charge for care, and returning to high-risk pools to cover people with preexisting or serious medical conditions. He says the Obamacare essential health benefits should be available to those who need them, but he argues that everyone shouldn’t be forced to pay for them. Waters also wants less government intervention in the nation’s health care system.

“I think a free market approach, as much as we possibly can, will help us help people in a quicker time and at a lower cost,” says Waters. “Sure, some folks will profit but profit comes when you find a service or product that helps people.”

Pugel counters that the individual mandate makes insurance economically feasible by bringing more people into the insurance pool so that the risks of covering older or less healthy individuals is offset by younger and healthier enrollees. But Riggs admits that Obamacare has so far failed to enroll enough young people into the system to accomplish that.

As for transparency, Riggs says he supports that idea but fears health care providers will resist the government forcing them to disclose their prices. Riggs also wonders who will administer the high-risk pools that Waters suggests.

Pugel adds that the commonwealth already experimented with a high-risk pool. Between 2001 and 2013 Kentucky Access provided insurance for those with serious medical conditions. Pugel says at its peak, the plan only covered about 4,800 people. He says premiums for those individuals were still almost double what they otherwise would have paid and yet the medical conditions that forced them into Kentucky Access in the first place weren’t covered for the first year they were enrolled in the plan. Enrollees also faced a $2 million lifetime cap.

Finally Pugel says the state had to pay $30 million into Kentucky Access just to keep the high-risk pool afloat.

Changes Looming for Medicaid
The future also remains uncertain for those on traditional Medicaid and the Obamacare Medicaid expansion that provided coverage to those making up to 138 percent of the federal poverty level (or about $16,400 a year).

The AHCA sought to cap federal funding for Medicaid, which could result in states like Kentucky getting less money to cover the poor and disabled. Repeal and replacement discussions have also included proposals to convert Medicaid to a block grant. Under block-granting, the federal government would provide states a fixed amount of money for their Medicaid programs regardless of how many enrollees they have.

Waters says he is among those who prefer the block-grant approach because he says that would allow states to tailor their Medicaid programs to the specific health needs of their citizens.

Last August Gov. Matt Bevin asked federal regulators for what’s called a “Section 1115 waiver” to overhaul the state’s Medicaid program. His plan would require some Medicaid enrollees to pay premiums and copays, and work a certain number of hours a week. It also proposes to eliminate some benefits like vision and dental coverage and funding for non-emergency medical transportation.

Pugel says the plan will reduce coverage, increase administrative costs for providers, and create more bureaucracy in state government. Riggs adds that Bevin’s call to charge small premiums and copays is merely a “feel good” measure that won’t generate enough money to even cover the costs of collecting the fees.

Wuchner and Waters say the plan is designed to reduce Medicaid costs borne by the state. (The commonwealth’s tab for the expanded Medicaid population is estimated to be about $1.2 billion over the next several years.) They say Bevin’s proposal also seeks to get enrollees more engaged in their own health care and encourage them to get jobs, job training, or an education that will put them on a path to buying insurance in the commercial marketplace. Wuchner says that will address a problem she sees in the current system, which she says incentivizes people to either not work or work limited hours so they won’t lose their Medicaid benefits.

Pugel notes that Bevin’s plan could force some 90,000 Kentuckians off the Medicaid rolls. Wuchner counters that will happen as people transition from Medicaid on to private insurance.

Despite their differences on the impact of Bevin’s proposal, the panel agrees that the federal Centers for Medicare & Medicaid Services (CMS) is likely to approve the state’s waiver application. Seema Verma, the health policy consultant tapped by President Trump to head CMS, helped Bevin craft his overhaul plan. 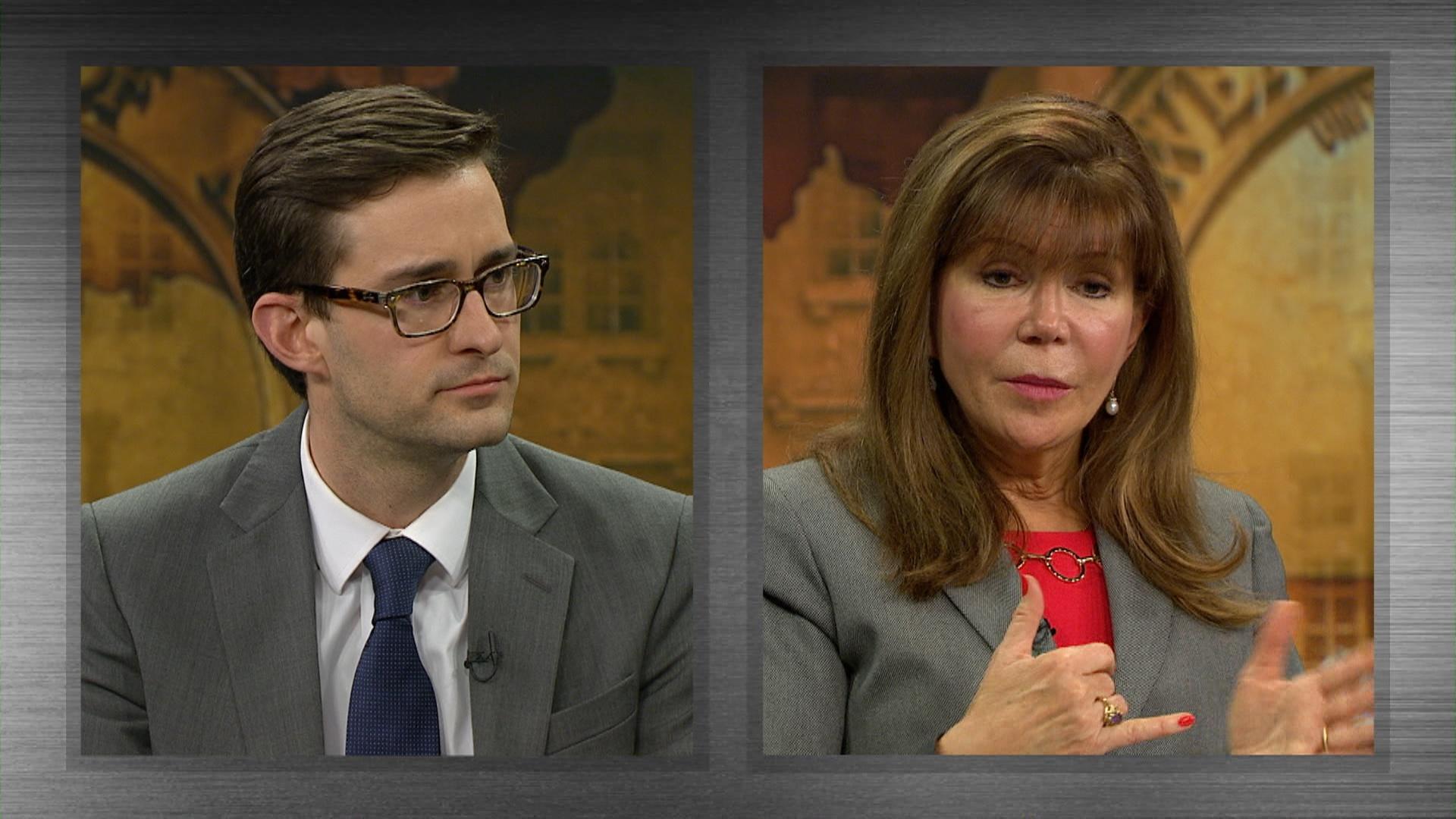