Candidates competing in the Democratic and Republican Party primaries for Kentucky’s Commissioner of Agriculture appeared on Monday’s edition of KET’s Kentucky Tonight.

This was the first in a series of discussions with candidates in contested races for statewide constitutional offices this election season.

The Democratic Candidates
Robert Haley Conway is an eighth generation farmer in Georgetown. He served 12 years on the Scott County Board of Education, including two years chair. He is also a member of the county’s soil and water conservation board. In addition to farming with his son, Conway managed a transportation company.

Joe Trigg served 28 years in the U.S. Air Force, then returned to his native Barren County to operate a beef cattle and vegetable farm. He is a three-term member of the Glasgow City Council, and he created a network of family farmers that want to help feed low-income people in Louisville.

Hemp and Marijuana
After allowing hemp pilot programs in the 2014 farm bill, the federal government fully legalized industrial hemp in the 2018 farm bill. Both Democratic candidates advocate for hemp production in Kentucky as well as cultivation of marijuana for medicinal purposes.

Conway says hemp has tremendous economic potential based on the range of products that can be produced from the plant’s seeds and fibers. As for medical marijuana, he says 60,000 Kentuckians with health problems would benefit from legalization. He says it’s time lawmakers in Frankfort approved its use.

“We need it, we want it, we have to have it,” says Conway. “How bad is it that people are suffering in this state when we have the opportunity to provide [some relief]?”

Conway and Trigg say the state Department of Agriculture should regulate all cannabis production in the commonwealth, not some other agency. Trigg says he would then establish a quota system similar to the one that once existed for tobacco. He says each family farm could grow one acre of hemp to supply the CBD oil market, and unlimited acreage of hemp for fiber production. Trigg says that would enable all farmers, even the smallest producers, to benefit from the new cash crop.

“We need to try to establish stability in the market and then sustainability so that it can be long term,” says Trigg, “because we need a continuous source of income for small farmers, and I believe this would be the way to do it.”

Additional Support for Farmers
Trigg says he wants to engage more young people in farming, and he would bring more food processors and manufacturers to the state. He says such businesses can create value-added products from Kentucky-grown vegetables and other produce and then supply those goods to markets around the country.

“We’re [at] the center of the U.S.,” says Trigg. “We should be exporting more, and diversified farms will do that.”

Conway says he would encourage more trucking companies to headquarter in Kentucky. He says local food prices remain high because of transportation costs charged by out-of-state companies. He also wants to see more greenhouse operations in the commonwealth. He says easy access to water supplies and reasonable land prices would make such operations profitable.

On food insecurity issues*, Conway admits that he doesn’t have a specific action plan, but he says he would hire the right people into the Department of Agriculture who could help him find the best solutions. [*Food insecurity: when people are unable to consistently access or afford adequate food.]

“I truly think that if it’s a big enough deal, and it is, and if it’s important enough, and it is, we will find a way,” says Conway.

The Republicans
Bill Polyniak grew up in California and worked in the financial sector and corrugated manufacturing industry before becoming a cannabis entrepreneur in Lexington. He was one of the first people to get a state permit to cultivate hemp in 2014. His Kentucky Cannabis Company produces hemp extracts and cannabidiol (CBD)-infused products.

Ryan Quarles grew up on his family’s tobacco and cattle farm in Scott County. He has degrees from the University of Kentucky, Harvard, and Vanderbilt. Quarles spent two summers working in Sen. Mitch McConnell’s office on the tobacco buy-out bill. He was elected a state representative in 2010 and Agriculture Commissioner in 2015.

Hemp Has Room for Growth
Quarles touts the growth of the state’s burgeoning industrial hemp industry during his first term. He says about 200 farmers grew hemp last year, and more than 1,000 are expected to grow it this year. Sales of Kentucky-made hemp products in 2018 were more than 3.5 times higher than the year before, which netted farmers nearly $18 million. He says hemp-related jobs now employ more than 450 Kentuckians.

“I’m very proud of the progress our program has made – the numbers speak for themselves,” says Quarles. “More Kentucky farmers have the opportunity to look at industrial hemp as an alternative crop.”

But as a grower and producer, Polyniak says the state’s hemp program should be even more successful. He says he would promote rules to protect and improve the quality of hemp grown in the state. For example, he says farmers should be allowed to grow hemp that has higher values of the psychoactive component THC. The general threshold for THC content in industrial hemp is 0.3 percent of dry weight.

Polyniak got into hemp after he found CBD oil helped alleviate his young son’s epileptic seizures. He says Kentucky should allow medicinal marijuana because “sick people can’t wait” for the government to do research to verify the medical benefits of cannabis that he says thousands of other studies have already shown.

Quarles says he supports more research into the benefits of cannabinoids. Otherwise he says he will wait for lawmakers to decide whether medical marijuana should be legal in Kentucky.

Other Crops, Other Markets
Beyond hemp, Quarles sees economic potential in growing hops for the craft beer industry, and chia, which is rich in omega-3 fatty acids and antioxidants, for the natural foods industry. And he says Kentucky bourbon distillers continue to demand locally grown corn.

The commissioner also hopes to boost exports of crops, livestock, and produce grown in the commonwealth, and he predicts more growth in the Kentucky Proud program, which he says has become a model for other states.

“We’ve grown Kentucky Proud to new heights with over 8,000 Kentuckians utilizing the state’s most successful marketing brand to connect our farmers with consumers,” says Quarles.

Polyniak says he fears the Kentucky Proud brand has been diluted by expanding beyond traditional farm-grown food items. Instead he would market Kentucky products to buyers in other states like California and New York. He also wants to locate more cattle processing facilities here so local beef doesn’t have to be shipped to other states to finish. Polyniak also wants to boost Kentucky’s dairy industry and change regulations governing sales of locally made artisanal cheeses.

Polyniak agrees that migrant labor is important to farmers, but he’s more interested in finding ways to get younger generations of Americans involved in agriculture. He says corn and cows aren’t exciting enough to draw young people to farming, but he believes growing cannabis would be.

Quarles says he’s worked to get youth from non-farm backgrounds engaged in agricultural endeavors. He also hopes to partner with Nicholasville-based Alltech to position Kentucky as a national hub of agriculture technology. The commissioner says that would encourage young ag scientists to move to the commonwealth.

Kentucky Tonight’s election preview programs continue on Monday, April 1 at 8 p.m. with the candidates for State Auditor and State Treasurer. 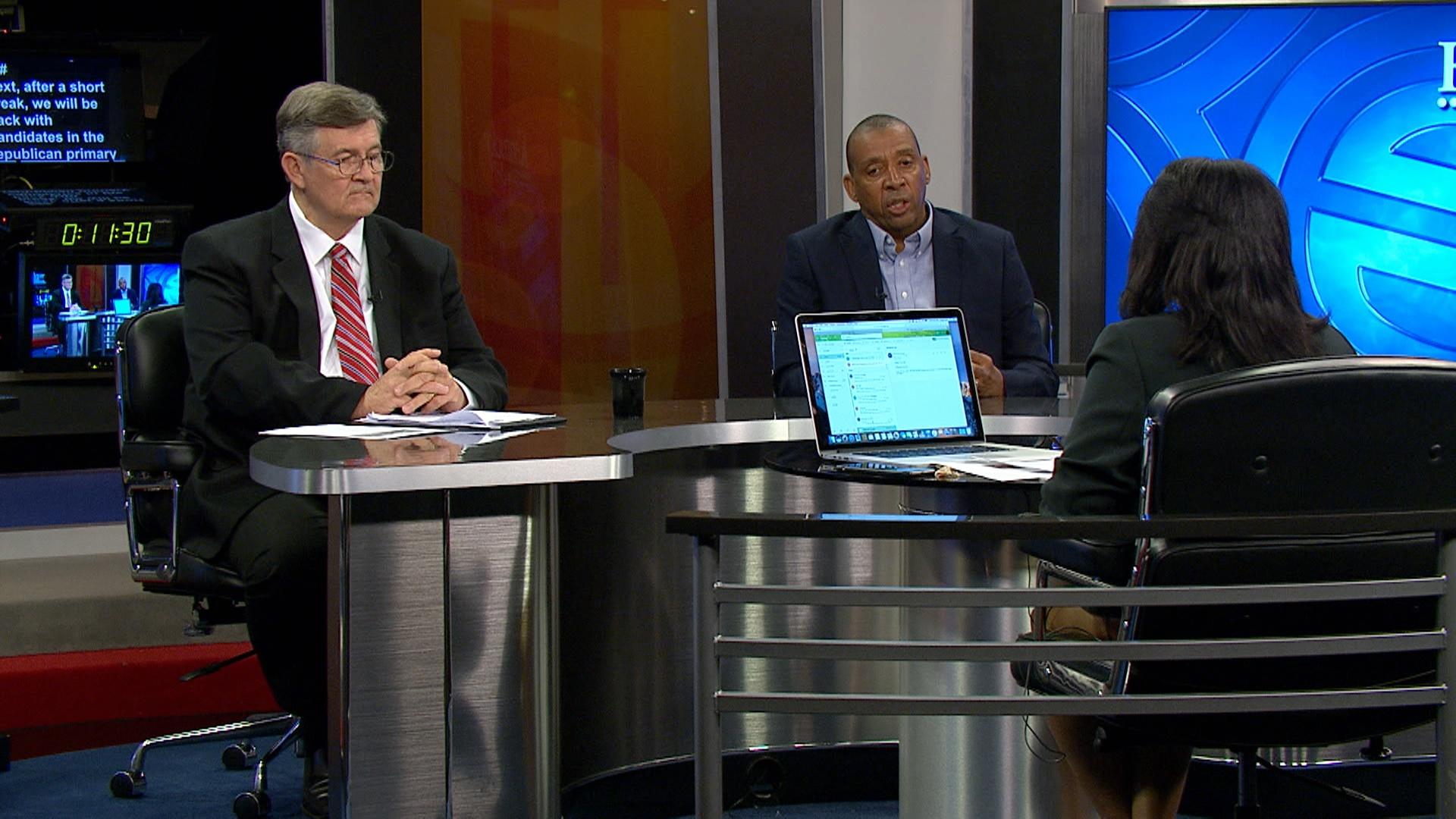