Kentucky Tonight hosted the fourth in a series of discussions about the 2022 midterm elections as Renee Shaw and her guests discussed two proposed amendments to the state constitution that will appear on the ballot. Proposed amendment 1 deals with sessions of the General Assembly, and amendment 2 covers abortion rights.

The longest section of ballots across the commonwealth will be devoted to the 744 words of proposed amendment 1. House Speaker David Osborne (R-Prospect), who sponsored the original legislation on this amendment, says the change would do two things: First, it would remove the traditional ending days from regular legislative sessions (March 30 for odd-numbered years, and April 15 for even-numbered years).

Osborne says that will allow legislative leaders the flexibility to schedule the mandated number of regular session days (30 days in odd-numbered years, 60 in even-numbered years) to other times of the year when they may be more needed. Changes to the legislative calendar would occur only after approval of a three-fifths majority of both chambers of the General Assembly.

To illustrate the need for such flexibility, Osborne points to how lawmakers would have benefitted from moving some of the 2020 regular session days to later in that year. Lawmakers were required to approve a state budget by April 15, 2020, but disruptions caused by the COVID-19 pandemic created significant economic uncertainty for the state and nation.

“It would’ve been much more responsible for us to have hit the pause button, come back in June and pass the budget, two or three months later, when we had better information available,” says Osborne. “I think this amendment allows us to be a better, more responsive, more effective legislature.”

Opponents argue that amendment 1, taken as a whole, would give more power to the legislative branch and cost taxpayers more money by potentially enabling lawmakers to work more days.

“Under this amendment, the General Assembly can call itself into special session for any reason: Pet projects, cater to special interests, there’s no limit on rhyme or reason,” says Senate Minority Caucus Chair Reggie Thomas (D-Lexington). “It disrupts our entire system of government.”

But Osborne counters the cost, even for a full 12-day special session, would be modest – about $2,000 per lawmaker, not counting travel, meals, and lodging reimbursements or pay bumps for legislative leaders. Senate President Pro Tem David Givens (R-Greensburg) says lawmakers also know that if they misuse the authority to call themselves into session, their constituents will vote them out of office.

“If we start callously calling ourselves back for pet projects or to spend money freely, we’ll know about it really quickly,” says Givens. “There will be no abuse of this and it gives us the ability to meet the citizens’ needs.”

Gov. Andy Beshear calls the amendment a money and power grab by lawmakers. He fears legislative leaders would call special sessions just to change small things done by the executive branch that they oppose instead of waiting until the next regular session. He contends the current system that grants only a governor the authority to call special sessions meets the needs of Kentuckians.

“Right now, a special session has to be special,” says Beshear. “The governor has to call it, and it really takes agreement between the governor and the legislature to make it work, and it is working.”

Some opponents argue the amendment is the Republican-controlled legislature acting against a Democratic governor. Osborne says he first proposed this amendment during the administration of former Gov. Matt Bevin, a Republican. Givens says the changes would give more flexibility to majorities of either party in control of the legislature. He also contends Kentucky citizens want this change so that their concerns about executive actions and orders such as occurred during the pandemic can be quickly addressed. He says Kentucky is one of only 14 states that doesn’t allow legislators to call themselves into special session.

Democratic state Rep. Jeffery Donohue of Fairdale contends lawmakers already have the flexibility they need to deal with executive actions or emergencies without having to undercut powers granted to governors in the Kentucky constitution.

“As legislators, we need to exhibit the strength and vision and flexibility to let the executive branch do what they need to do,” says Donohue. “I think if you tip the scales either way, it really creates a problem for us as a legislative body.”

Donahue, Beshear, and other opponents also fear expanding regular or special General Assembly sessions across more of the calendar year will make it harder for lawmakers to do their non-legislative jobs back home. Donohue says this also is a step towards creating a full-time legislature in Kentucky. Beshear argues the framers of the state’s 1891 constitution wanted the commonwealth to have part-time, citizen legislators.

Osborne concedes that is a valid concern, but he contends that actually became an issue when the state moved to annual legislative sessions more than 20 years ago. He says it would be easier for lawmakers to do their other jobs if their legislative obligations weren’t intensively condensed into the first three or four months of the year, which he says forces legislators to be away from home for extended periods.

The much shorter proposed amendment 2 would add language to the state constitution that says nothing in the document protects an individual’s right to an abortion or requires government funding for the procedure.

Addia Wuchner, executive director of Kentucky Right to Life and a former state representative, says the amendment will make it clear that lawmakers have the sole authority to determine laws and policies regarding abortions. Instead of harming women or reproductive health service, she says the change will protect the state constitution from protracted court battles and judges that want to “invent a right to abortion.”

“It only keeps the right to abortion out of the constitution and prevents the funding of abortion, so it settles that constitutionally,” says Wuchner. “It’s not doing anything to women and girls.”

Voters in Alabama, Louisiana, Tennessee, and West Virginia have already approved similar amendments to their state constitutions. A similar proposal in Kansas failed a public vote back in August by 59 to 41 percent.

Tamarra Weider, Kentucky state director of Planned Parenthood Alliance Advocates, says she thinks Kentuckians will reject the amendment proposed here. Although the issue of abortion is often divisive, Weider contends this measure is unifying people in ways she never expected.

“This amendment is widely unpopular… The voters of Kentucky are fed up with the obsession with abortion and how much it impacts them now,” says Weider. “They want to have real conversations with their providers, not with the legislators’ intrusion.”

The Republican-controlled state legislature already passed a so-called trigger law that banned nearly all abortions in the commonwealth if the U.S. Supreme Court overturned Roe v. Wade, which the justices did last summer. The General Assembly also passed a separate six-week ban on abortions. Those laws face court challenges, and the Kentucky Supreme Court is set to hear oral arguments on the issue in mid-November – after the public vote on amendment 2.

Pro-choice advocates say the amendment’s language on public funding is unnecessary since government dollars are already banned from paying for abortions. Weider also says the existing bans have already hurt women who need access to abortions as well as other types of reproductive health care. She says the Kentucky chapter of the American College of Obstetricians and Gynecologists reports that individuals dealing with miscarriages are having difficulty getting medications they need. Under the “chilling effect” of these laws, she says pharmacies are afraid to provide certain medications that may be associated with abortions to women who need those drugs for other legitimate medical purposes. She also says physicians are uncertain about how to help their patients make some maternal health decisions out of fear of potential liability or prosecution.

“Doctors are standing up and saying ‘no’ to this,” says Weider, “and they are advocating against this amendment and they’re putting their money into this campaign.”

Kentucky has a long history of pro-life legislation, dating back to 1910, according to Wuchner. She says it’s fearmongering and misinformation to claim women can’t get the care or medications they need. She also contends that specifying no state funding for abortions is critical because she says the Hyde Amendment, which bars federal dollars from paying for abortions except in cases of rape, incest, or the life of the mother, faces its own legal challenges. Wuchner says the Hyde Amendment also does not preclude states from using their own tax dollars for abortion services.

“One thing that Kentuckians agree on, on both sides, they really don’t want their taxpayer dollars paying for abortions, and [this amendment] makes it clear and places that into our constitution,” says Wuchner. 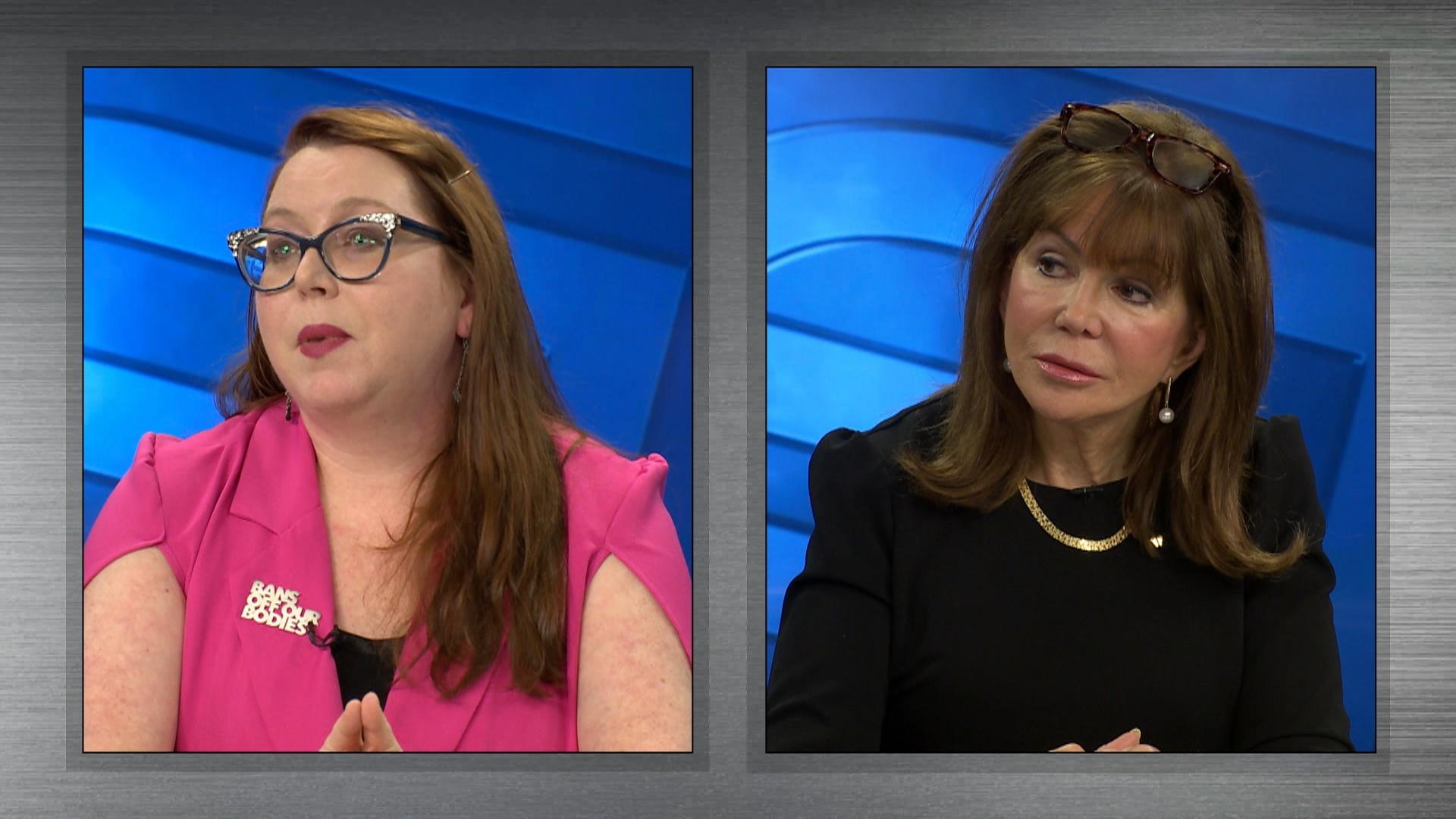