Counting Down to a Pivotal General Election

Three weeks from tonight it will all be over. The speeches, debates, and attacks will be done, the votes will be counted, and the country can get back to regular business.

Or at least we hope that’s the case. In an election year that has seen so many unusual and unprecedented episodes, it’s hard to predict what might happen after Nov. 8.

A panel of political operatives convened on KET’s Kentucky Tonight to discuss the 2016 elections and to detail the congressional races and several key state contests on this year’s ballot in the commonwealth.

Congressional Incumbents Have the Edge
It’s good to be the incumbent this cycle, especially in Kentucky’s 2nd and 5th Congressional districts where there are no Democratic opponents. Democratic political consultant Matt Erwin says it’s difficult to find challengers given the constant fundraising demands placed on candidates, especially if they win and want to seek reelection. Another factor adding to the expense of running for office is Kentucky’s unique geography. Tres Watson, communications director for the Republican Party of Kentucky, says since many media markets cross state borders, candidates are left paying for airtime in places like Nashville, Knoxville, Huntington, and Cincinnati just to reach Kentucky voters.

The commonwealth does have one open congressional seat this year, thanks to the resignation of 1st district Rep. Ed Whitfield earlier this fall. That race in southern and western Kentucky features Republican James Comer and Democrat Sam Gaskins. Wilbur says Comer has great name recognition throughout the district thanks to his tenure as state agriculture commissioner and his 2015 bid for governor. She predicts a double-digit win for Comer.

Hopkinsville construction worker Gaskins, who is a veteran of both the Marine Corps and the Army, has faced an uphill battle soliciting donations for his campaign. And Lowry says the state Democratic Party, which has also struggled with fundraising this cycle, hasn’t been much help.

“In Sam Gaskins’ case like others, it’s hard for us to give a whole lot of support financially,” Lowry says. “We have limited resources at this point, but we’ve given what we can.”

In central and western Kentucky’s 2nd district, Rep. Brett Guthrie is seeking his fifth term in Washington. Watson lauds the Bowling Green Republican for his work on the House Education and Workforce Committee and Energy and Commerce Committee, and for helping to pass important workforce development legislation.

In the 3rd district, which includes most of Jefferson County, Kentucky’s lone Democratic representative John Yarmuth faces Republican businessman Harold Bratcher. Erwin says the seat belongs to Yarmuth’s as long as he wants it.

“When you have the nickname Congressman Awesome, your district is behind you,” Erwin says. “If you live in Louisville and you go anywhere, you see John Yarmuth. He’ll go to the opening of an envelope.”

Massie, who is affiliated with the Tea Party movement, has developed a reputation an independent and a maverick.

“He is beholden to no one,” says Watson. “He speaks his mind and the people of his district love him for that.”

Rep. Hal Rogers will advance to his 19th term in Congress representing the 5th district in eastern and southeastern Kentucky. Through his work on the House Appropriations Committee, where he has served as chairman since 2010, the Somerset Republican has funneled significant federal dollars to the district, especially to combat the region’s epidemic of drug addiction, says Wilbur.

And in central Kentucky’s 6th district, Democrat Nancy Jo Kemper hopes to unseat Republican incumbent Andy Barr. Kemper, who is a minister and former executive director of the Kentucky Council of Churches, has criticized Barr for taking campaign donations from banks that he oversees as a member of the House Financial Services Committee. Lowry contends Barr is indebted to those institutions and says the Republican also opposes the kinds of regulations that would have prevented the 2008 economic collapse.

Watson defends Barr by saying donations are simply part of the political system and don’t represent a quid pro quo. Wilbur adds that Barr has a record of being an independent voice in Congress.

“Congressman Barr has broad support. He has contributions that are $5, $500, $5,000 and so he’s not bought by the banks,” Wilbur says. “Small dollar, big dollar, people believe in his message and I don’t think that’s anything to be embarrassed of.”

State House Races to Watch
As Republicans try once again to wrest control of the state House of Representatives from Democrats, their efforts could hinge on several rematches of special elections held earlier this year.

In March, Democrats won three of four special races to fill seats that opened when representatives won or were appointed to new offices. That put the balance of power in the chamber at 53-47 in favor of Democrats. The party has held a majority in the House since the 1920s and it’s the last legislative chamber in the South controlled by Democrats.

The special election rematches are:

– Republican businessman Phillip Pratt returns to challenge incumbent Democrat Charles Tackett in House district 62 in Owen County and parts of Fayette and Scott counties. Although Democrats won the special election, Watson says a much larger general election voter turnout will favor the Republican in this district.

In House district 98, which covers portions of Boyd and Greenup counties, Democrat Lew Nicholls, a former circuit judge, has a new challenger in November. Republican Danny Bentley is a pharmacist in Russell.

The panel labels two other House contests as races to watch. The 38th district in southwestern Jefferson County features incumbent Denny Butler against attorney McKenzie Cantrell. The district leans Democrat and Butler was a Democrat until late last year. Watson says he switched his affiliation to Republican out of frustration when Democratic officials wouldn’t heed his call to audit a state fund for police officer training.

And in the 92nd House district, which covers Knott and Magoffin counties and part of Pike County, Democratic incumbent John Short is squaring off against farmer, preacher, and retired state trooper John Blanton. Short’s name was included in an affidavit in a Magoffin County vote-buying case, but Erwin and Lowry emphasize that the Democrat has not been accused of any wrongdoing.

Other Thoughts on a Crazy Election Year
If President Obama proved a drag on Kentucky Democratic candidates in recent years, state Republicans hope that presidential nominee Hillary Clinton will be equally problematic for state Democrats this year. Clinton was roundly criticized for a remark earlier this year that indicated her energy policies would put coal miners and companies out of business. The Democrat’s comments were part of a response to how she would help revitalize struggling coal communities.

“I think Democrats across the state when you get outside of the urban areas, they are running as far and as fast as humanly possible from Hillary Clinton,” Watson says.

But Lowry and Erwin argue that Republican nominee Donald Trump could be an equally heavy weight on GOP candidates in the commonwealth, especially those who have yet to denounce the real estate mogul’s sexually aggressive comments about women. Besides, Lowry says, voters here are savvy enough to know that state Democrats have their own distinct values.

“Here in Kentucky, we realize there’s a difference between the national Democrats and the Kentucky Democrats,” Lowry says. “There’s a lot of folks who don’t like Hillary Clinton but still love and support Kentucky Democrats.”

Erwin adds that split-ticket voting could either sink or save the Democratic majority in the state House. He says it would be bad news for Democrats if Republicans who turn out for Trump also vote GOP down their entire ballots. But Erwin suspects that may not happen.

“You’re going to see the lowest amount of straight-ticket voting you’ve ever seen in a presidential election year in Kentucky,” Erwin says.

Democrats also hope the state House elections could serve as a referendum against Republican Gov. Matt Bevin and his efforts to overhaul the Medicaid expansion and his attempt to cut higher education funding, which the Kentucky Supreme Court recently rebuffed.

Wilbur and Watson contend voters are frustrated with how the political system in Frankfort has worked for them, and that more Republicans are needed to shake up the status quo at the capitol.

“In, I think, every metric on the board, Kentucky needs improvement and we’re not going to get there by repeating eight years of [former Gov. Steve] Beshear,” says Wilbur. 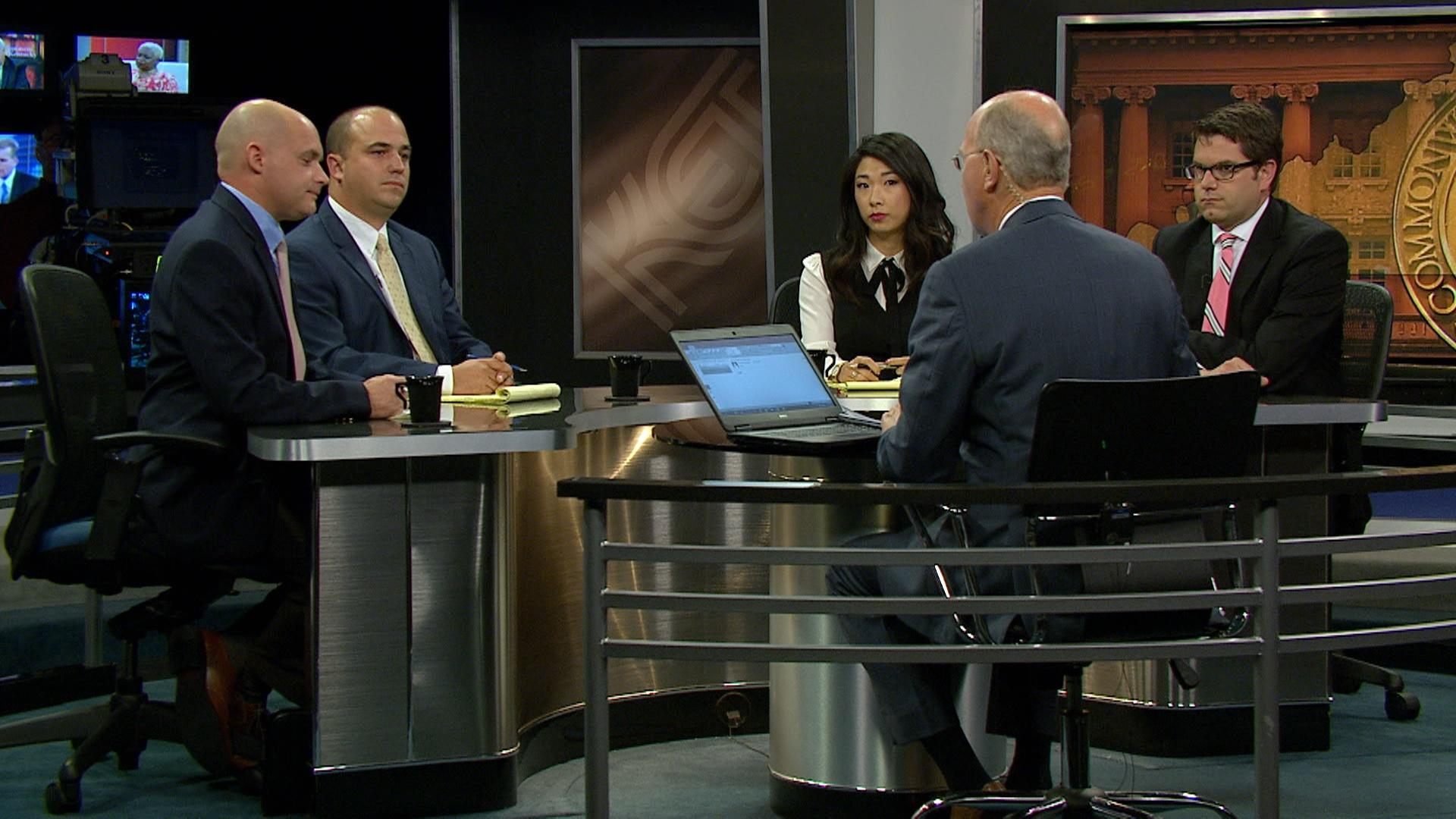